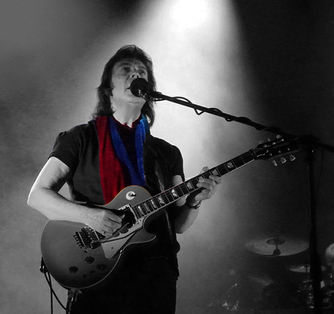 If it ain’t broke don’t fix it.
Just retune it.

In 2015, on the back of the outstanding 40th anniversary as a solo artist release Wolflight, Steve Hackett and his acclaimed band delivered a well-rounded and superbly performed Genesis Revisited with Classic and New Hackett show; the tour included an excellent show in Glasgow.

A year and a half on and Steve Hackett was back at Glasgow’s Royal Concert Hall to deliver a show with exactly the same framework but with a completely different set.
But then with such a wealth of solo material to choose from, an excellent new release in the shape of The Night Siren and that classic Genesis back catalogue, it’s not inconceivable that Mr Hackett and band could create and deliver half a dozen different set-lists that would delight and satisfy any audience.

Joining Steve Hackett and long-time band members Roger King (keyboards), Gary O'Toole (drums, vocals) and Rob Townsend (saxophone, flute, percussion, vocals) for this tour was the incomparable Nick Beggs, who has recorded and performed with Hackett before; he is also the perfect four-string, six string and double-necked Manson custom guitar fit for the Hackett and Genesis material.

Animated throughout, Nick Beggs also stole the show as the sharpest dressed musician on stage, outdoing Gary O’Toole’s cool missing Blues Brother look with his waistcoat, kilt (which looked very much like the Muir tartan; pity I didn’t have time to catch up with him and ask) and the most employed of all his instruments, the favoured cherry red Spector Ghost bass.

Opening with the bright, shining prog-pop of 'Everyday' (with spot-on four voice lead vocals) and closing with the wall of sound that is 'Shadow of the Hierophant' (Gary O’Toole absolutely monstering the drum kit while the cross legged Nick Beggs beat out the resonating bass pedal tones with his fists), the band delivered a meticulously performed and fan-pleasing eight song, fifty minute Classic and New Steve Hackett set.

Three songs from The Nigh Siren featured – the high-powered instrumental 'El Niño,' the quirky and intricate 'In the Skeleton Gallery' and 'Behind the Smoke,' an eastern themed progressive tour de force that starts delicately (featuring Rob Townsend) before building to a guitar wrenching and full-blooded musical cry for the sorrowful plight of refugees through the ages.

Powerful as 'Behind the Smoke' was, it was matched in poignancy by the lovely and charming 'Serpentine Song;' the not often performed number was written by Steve Hackett for his father.

The pulsating and rhythmic sounds of 'The Steppes' was a well-received fan favourite but a pleasant surprise for those not familiar with this tour’s set list was an airing for the emotive 'Rise Again' (the song was influenced by the book Trail of Tears, by John Ehle, and the rise and fall of the Cherokee nation).

Around the same time Iron Maiden were launching in to their Book of Souls show less than a mile away at the Hydro Arena, the band, in the company of Nad Sylvan (the singer has a natural tonality that encompasses the vocal timbre of both Peter Gabriel and Phil Collins, hence a great fit for the Revisited sets) returned to the stage to deliver their Book of Genesis, this year's featured chapter being Wind & Wuthering, celebrating its 40th anniversary.

The five Wind & Wuthering songs selected worked extremely well as a mini-set in their own right; it was a delight to hear and see such classic material performed again with the added sprinkle of Rob Townsend’s saxophone and flute passages.

Opening brace 'Eleventh Earl of Mar' and 'One for the Vine' were fantastic and faultless, other than an out-of-tune guitar glitch as the former kicked in to gear; the problem was rectified by a quick switch of instruments and explained away humorlessly by Steve Hackett – "that was Gary Moore's old guitar; the ghost of Gary has obviously decided 'that boy shall not play the boogie woogie on my guitar tonight!'"

A full-on, firing on all five cylinders rendition of  '…In That Quiet Earth' preceded the inevitable but almighty delivery of 'Afterglow,' one of the most uplifting and moving ballads to come from any rock band, prog-based or otherwise; it led to full-voiced, throaty roar of approval from the Glasgow crowd.

Other numbers pulled from the sadly short-lived but exceptional Then There Were Four period of Genesis included 'Dance on a Volcano' and a cracking version of the slow build, fast finisher 'Inside Out,' the Wind & Wuthering out-take that found a home on the otherwise dreadful and misguided Spot the Pigeon EP.
("Don’t worry we’re not playing Spot the Pigeon or even Match of the Day; we wouldn’t inflict that on you").

Closing out the Genesis set was the classic one-two prog-punch of 'Firth of Fifth' and 'The Musical Box.'
The latter’s second half was quite stunning in its performance and delivered so intense a crescendo that it must have rivaled anything the Maiden boys were thundering out of the Hydro’s P.A. just down the road.

Encoring with the prog 'n' roll of 'Slogans' (featuring the power trio Hackett, Townsend & Beggs in guitar, saxophone and bass unison) and 'Los Endos,' Steve Hackett (on scintillating six-string form throughout) and the band left the stage to a standing ovation and another resounding roar of approval that was still echoing as the lights came up.

If it ain’t broke don’t fix it.
Just more of the same variations on a theme next time around, Steve, thanks.