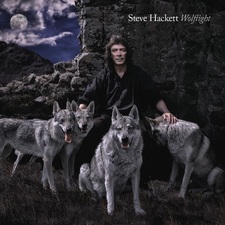 'Out of the Body,' introduced by wolf cries before ever-shifting rock sections, melodic guitar lines and orchestrated backings take over, acts as the perfect musical overture to Wolflight, Steve Hackett’s most musically adventurous album to date.

The album is also incredibly strong lyrically; many of the songs on Wolflight are as much about the story or narrative as they are the well-crafted and cleverly arranged musical constructs.

The quest and fight for freedom and peace are recurring themes on the album, while Steve Hackett’s childhood memories are explored on the all the fun of the fair number 'The Wheel's Turning.'

The title track is a Steve Hackett tour de force of light, shade, musical change-ups and interesting instrumentation that includes Sara Kovaks on didgeridoo and Malik Mansurov on the tar, an 18th century stringed instrument.

Flitting between folk-song and harmony vocal beauty, heavier progressive tribal notations and trademark Hackett guitar remarks, 'Wolflight' is a startlingly evocative old-tale of the nomadic tribes who roamed between China and the Roman Empire and for whom the Wolflight was both an important and significant time of the pre-dawn day.

Not to be outdone by such a strong opening statement, 'Love Song to a Vampire' is an emotive and powerful nine minute piece that, lyrically, takes the harsh reality of an abusive relationship and transfers the situation into a dark, fantasy world of vampires and control.

The song is beautiful (a delicate yet intricate nylon string guitar piece forms the introduction), melodic (the big voiced choruses featuring backing vocals from Amanda Lehmann are built off the second syllable of the word vampire) and dark – the latter two minutes of the number build from a short orchestrated segment to full-on slightly sinister rock, Steve Hackett delivering both feisty and melodically poignant guitar lines over Gary O’Toole’s drums and guest musician Chris Squire’s bass.

'Love Song to a Vampire' is not something you come up with in a fifteen minute writing session.

By way of contrast 'The Wheel's Turning' is a progressive power-pop extravaganza that intros and outros with sounds of a fun fair, contains an ELO meets the Moody Blues hard-pop core and has a chunky middle section that recalls It Bites in their time-changing instrumental passages heyday.

It’s back to primal roots for 'Corycian Fire' (inspired by the Corycian cave in Greece), which opens by featuring Rob Townsend on the duduk, the Armenian double reed instrument.
An outstanding mixed-genre musical adventure, 'Corycian Fire' fuses Middle Eastern motifs with progressive and heavy rock structures before culminating with a full choir delivering vocal chants in Ancient Greek over heavy percussion.

'Black Thunder' takes the listener back to the dark days of plantation slavery in the deep south, cries for freedom and slave rebellion.
The song is a blend of quieter vocal passages and progressive blues instrumental sections with an orchestral-to-jazz closing remark that again features Rob Townsend, this time on saxophone.

Complementing the more complex pieces are the delicate acoustic instrumental 'Earthshine,' the multi-layered vocal warmth and acoustic charm of 'Loving Sea' and the short, melodic album closer 'Heart Song,' which is set up by the closing remarks of previous number 'Dust and Dreams.'

The latter is an eastern influenced instrumental with a rhythmic sway that conjures up musical images of camel trains and Saharan climates before a shorter rock-driven section gives way to 'Heart Song.'

For fans of Steve Hackett and classic era Genesis this is a win-win period.

And for Steve Hackett?

Forty years on from his debut solo album Voyage of the Acolyte and a subsequent large body of work that includes progressive, world music, rock, instrumental and classical genre releases, the noted guitarist can bathe in the Wolflight of his most accomplished and striking multi-genre work.