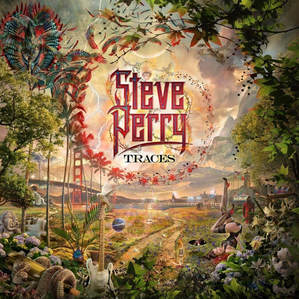 Not only is it that first line sung on 'No Erasin’,' the opening number on Traces, Steve Perry’s first solo album in nearly a quarter of a century, it also nods to the patience of the long-standing fans who have waited through a couple of false dawns for new material from the ex Journey vocalist.

'No Erasin’' is a classy and ear-catching, geared for radio slice of melodic rock that both heralds the return of Steve Perry to a microphone and vocally belies the fact it’s been twenty-two years since his Journey ended in a Trial By Fire and two decades from his last solo statement, the more significantly titled than anyone could have foreseen at the time, 'I Stand Alone,' from the animated movie Quest For Camelot.

Vocally, it doesn’t sound like twenty years.
There may have been half a dozen or so guest backing vocal appearances on other artists albums but, as a lead instrument, the voice of "The Voice" hadn’t even been flexed in the shower, such was Steve Perry's detachment from music these last couple of decades, until his stage comeback with The Eels on three walk-on appearances with the band in 2014 and, more lately, sound-check sing-a-longs with the likes of Toad the Wet Sprocket.

Yet, while vocally thinner and carrying a huskier rasp than heard on For the Love of Strange Medicine (1994) and Trial By Fire (1996), Steve Perry hasn’t lost any of that distinct rich tone, vocal resonance or ability to express himself through a musical vocabulary and vocal intelligence only the truly great singers have (the vocal bridges and vocal arrangements on Traces are a true strength of the album).

'We’re Still Here,' which follows 'No Erasin’,' is a beautifully framed soul ballad that also highlights the Perry paradox of Traces – the sparser the arrangement, the stronger and fuller the vocal becomes.
'We’re Still Here' also sets up the album in terms of its lighter weight and lyrical themes – eight of the ten songs are smooth and soulful, or R&B flavoured ballads, most of which are shaped by the profound loss that led to Steve Perry finding his voice again...

At the end of 2012 Steve Perry’s girlfriend, Dr Kellie Nash, lost her battle with breast cancer.
An inseparable couple during their two years together, Perry’s promise to uphold Kellie Nash’s wishes that he not return to isolation have culminated in the cathartic and emotional outlet that is Traces, through the rhythmic pulse that beats behind the atmospheric ballad 'Most Of All,' the piano led and orchestrated 'In the Rain' (both written before Steve Perry met Kellie Nash) and other tracks such as 'No More Cryin’.'

The latter song recalls Journey's 'Stay Awhile' but not in any "sounds like" sense; more the feel and pocket of the song, courtesy of renowned drummer Vinnie Colaiuta, who features on six of the ten tracks.

The pocket and rhythmic feel created on many of the songs is another strength of Traces, but then the fact Steve Perry played bass and knew his way around a drum kit well before joining Journey (he also contributes some bass parts to the album) means he gets rhythmic phrasing, and timing (musically and vocally), like very few other singers.

Sitting central on the album and acting as the up-tempo buffer to the ballads is 'Sun Shines Grey.'
A rockier number featuring guitarist John 5 (and some high-cryin' backing vocal harmonies from Perry), 'Sun Shines Grey' lifts the Traces tempo while lyrically keeping to the reflective themes of the album.

The final quartet of songs are as soulful as they are poignant.

'You Belong To Me' is another piano and strings number; 'Easy To Love' is built over a slow, finger-clicking soul meets gospel rhythm; George Harrison’s 'I Need You' has been reinterpreted as a slow R&B ballad;
'We Fly' is an ethereal closing remark that has Steve Perry at his soul-baring best, vocally floating over synth textures, piano and perfectly placed guitar remarks from Thom Flowers (who co-produced, recorded and mixed the album with Perry).

A US Deluxe Edition of Traces features five bonus songs that all have something a little different to offer.
'Angel Eyes,' which arguably should have made the standard edition of Traces, is 60s soul-pop meets Motown meets the Street Talkin’ Steve Perry; the reggae-lite 'Call On Me' concludes with a personal and poignant love & laughter outro; 'Could We Be Somethin’ Again' is a calypso cool, "ya-ya" lovin’ bit of fun; 'Blue Jays Fly' is a haunting, "all alone" lullaby to profound loss.

Pick of the five however is torch song 'October in New York.'
Composed, fully orchestrated and beautifully arranged in Great American Songbook style, you could be forgiven for thinking it was written seventy years ago and transported to the present Perry day.

The album, complete with interesting and beautifully painted cover artwork 'tracing' Steve Perry’s past history (with no symbolic stone left unturned, no matter what’s under it), will be too ballad heavy for the rock brigade or those who would rather he just sang Journey all day (best of luck with that).

But whether heard as a couple of ballads too many or appreciative and understanding of the cathartic and melancholic nature of Traces, this is a remarkable return by a remarkable singer.

Still One in a Million?

Perhaps so, and on that (vocal) note you will have to excuse me, I have to start the update to that very eBook, which hopefully won’t take as long to reappear as Steve Perry did.