The truth is out
Steven Wilson - To The Bone 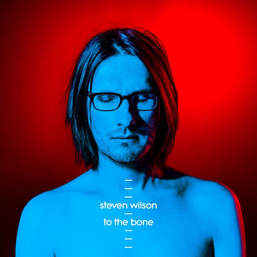 Well, it seems as if rumours of Steven Wilson’s commercial pop death have been greatly exaggerated, based on all the hype, hoo-hah, commentary and "pop or prog" debates aimed at To the Bone before it even got out the studio door.

Which is ironic and not a little humorous, given that the title of the album and title track are an honest cry for a stripping back to the bone all the fake news, misinformation and reaching conclusions before you have all the facts, allowing for a return to the core truths of the matter.

In pre-release promotion Steven Wilson mentioned a number of artistically creative and highly successful progressive pop based artists/ albums as inspiration (including Peter Gabriel/ So, Kate Bush/ Hounds of Love and Talk Talk/ Colour of Spring), but that hardly makes for a commercial pop offering.
​
Intelligent, sophisticated, atmospheric pop yes, but nothing to get your progressive knickers in a twist over.
(Indeed the only pure pop number to be found within To The Bone is 'Permanating,' a fun three-and-a-half minute slice of piano-led, electro-beat foot tapping that hearkens back to ELO at their high-voiced poppiest).

Opening number 'To The Bone,' builds off a percussive beginning and spoken word intro from American schoolteacher Jasmine Walkes, then adds a little eastern musicality before becoming a fully formed melodic splendour of rock, blues, prog and a little funk.

Dynamically speaking 'To The Bone' is a song Tears For Fears would have been proud to call their own and if that’s put you off to the point of reading no further and listening no longer, you’re sowing the seeds of your own fate and missing out on an album that mixes moments of expressive and progressive musicality, huge uplifting melodies and that Steven Wilson brand of pathos and poignancy.

Elsewhere, the previously referenced influences manifest themselves in the most sublime of ways.
'Song Of I' is an electro-percussive, spacey and string backed number (featuring the voice of Sophie Hunger) that would sit comfortably on any Peter Gabriel album you care to mention while the beautifully striking 'Pariah,' featuring the lovely and emotive voice of Israeli singer Ninet Tayeb, is Steven Wilson’s nod to the Peter Gabriel - Kate Bush classic 'Don’t Give Up' but not in any "sounds like" sense; more in atmosphere created and emotional vibe.

Wilson and Tayeb duet again on the delicate acoustic vignette and break up song 'Blank Tapes.'

To the Bone is Steven Wilson’s most melodic and accessible album to date, an intentional move that should see the album ripple out beyond the prog seas and lapping against mainstream shores; 'Nowhere Now' and the rockier 'The Same Asylum as Before' (featuring a great rough-to-smooth guitar solo from Wilson) shine as wonderful examples of songs with melodic purpose within concise, progressive soundscapes.

But one of progressive rock’s leading creative lights also underlines why he is just that via a trio of numbers that cover the darker subjects of war and terrorism.
The rise and fall of 'Refuge' (inspired by the Syrian refugees and the Calais crisis) features Mark Feltham’s harmonica, co-producer Paul Stacey’s plaintive guitar and Steven Wilson’s synth crying out in pleading, consecutive-play harmony.
'People Who Eat Darkness' is an edgy and intense rocker written about the Bataclan Theatre massacre in Paris and the subsequent media coverage.
The near nine-and-a-half minute, three movement 'Detonation' is an ever-shifting, primarily up-tempo and highly charged number about fundamentalist terrorism and how such individuals justify themselves or attempt to legitimise their actions.

Album closer 'Song of Unborn' is unlike any track that precedes it.
The atmospheric number's piano-led balladeering structure, coupled with ethereal Kate Bush moments, make for the perfect vehicle to deliver a lyric for the unborn baby and the advice to embrace the life that’s about to unfold, even in a world that's not all it's cracked up to be.

Musically, To The Bone is hard to fault and sonically you’ll find very little to complain about, courtesy of a fine production and mixing job from Steven Wilson and Paul Stacey.
(As mentioned with 'Refuge,' Stacey is one of many musical contributors on To The Bone but the vast majority of guitar, bass and keyboard work is covered by Wilson; drum duties are shared by Craig Blundell and Paul Stacey’s twin brother Jeremy Stacey).

To The Bone will surely, and deservedly, get more attention than any previous Steven Wilson offering, but that doesn’t mean he’s 'popped' his prog-clogs to head for commercial mainstream heaven.

Nor does it mean he’s now a shoe-in to be a Glastonbury headliner or get himself an awkward and decidedly forced product placement cameo slot in Game of Thrones.

But it does mean that the recent comment from the Telegraph’s Clive Morgan that Steven Wilson is "probably the most successful British artist you’ve never heard of" may now not be accurate.

Because by expanding his sonic palette and taking some of the best progressive based pop records as his sounding boards, Steven Wilson has delivered another excellent, and in this case potentially audience widening, release.

And that’s the core truth of the matter.