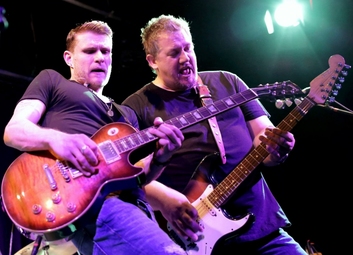 Stevie Nimmo and Ben Poole on tour together equates to a band of musical brothers; a highly efficient and talented platoon of blues comrades in arms featuring Nimmo, Poole, the well-drilled and regimented rhythm section of Mat Beable (bass) and Craig Bacon (drums) and Poole’s keyboard lieutenant Steve Watts.

Ben Poole, accompanied by Watts, Beable and Bacon (the latter pair, two thirds of the outstanding Stevie Nimmo Trio and Poole’s rhythm section of choice for the last couple of tours of duty) opened the co-headlining show at the Oran Mor in fine, various shades of blues style across a set that unsurprisingly featured a number of songs from Ben Poole’s recent studio album Time Will Come.

New song highlights included a crunching take of album opener 'Lying To Me' (a smokin’ slice of mid-tempo blues rock, husky Ben Poole vocal and a wah-crying solo that kicked the number in to an even higher gear) and the contrasting 'Longing For a Woman.'
The latter, a slow soul-pop blues in the studio, carried far heavier weight live; its rise and fall of soulfully arranged passages were wrapped around an extended and impassioned solo, Ben Poole firing a salvo of rapid-fire notes from his six-string weapon of choice.

The rockin’ funkiness of 'Let’s Go Upstairs,' the title track of Ben Poole’s debut album, also got an airing and it’s not a Ben Poole performance without a striking cover or two – Poole’s rendition of 'Have You Ever Loved a Woman' always impresses.
Switching from his favoured telecasters to Gibson, Poole delivered earthier, traditional blues tones on both his searing solo and his unaccompanied introduction to the song; unfortunately those opening six-string remarks were marred and somewhat lost in the ever increasing noise from the bar area at the back of the venue, a now all-too-familiar scenario of club gig life (so bad on the night that it was noticed by not just the majority striving to enjoy Ben Poole’s set but the musicians themselves).

The tour-de-force of any Ben Poole set over the last year has been 'Time Might Never Come,' a slow build power rock number inspired by, and always dedicated to, the late Gary Moore.
As the song hit its musical stride (the quieter passages again marred by off-stage noise) so too did Ben Poole; he delivered lick after lick via a furious flurry of fretboard runs, only to drop the energy with a highly emotive epilogue that would have had a Belfast boy’s Irish eyes smiling.

Even when Stevie Nimmo turned it down to amps off guitar only mode during the atmospheric slow blues of 'Running On Back To You' the audience were in hushed, full respect mode.
"It's as bluesy as I get!" declared Stevie Nimmo prior to the song’s start, but truth be told there’s a bluesy soul at the core of just about every song Nimmo writes and performs – 'Change' allowed the band to get their funky soul blues into gear, Mat Beable and Craig Bacon supplying the groove driven sway, while Stevie Nimmo got his Southern tinged blues on for the cover of the Allman Brothers 'Gambler’s Roll.'

Great cover that it was, it was bettered by the melodically infectious take of Storyville’s 'Good Day For the Blues,' a song that features on Stevie Nimmo’s first solo album, the tragically under-heard and criminally under-promoted The Wynds of Life (if ever a song deserved continual airplay rotation on every blues based radio station it’s Stevie Nimmo’s fuller sounding cover of the Storyville original).

Outdoing even 'Good Day' however was an outstanding performance of 'The Storm' by Big George (Watt) and The Business.
George Watt was a huge influence on Stevie Nimmo and he paid respect and homage to one of his heroes by doing the late and legendary Glasgow musician’s song serious justice; Nimmo was truly in the zone as he delivered tasty, Trower-esque lines across the spacey fusion blues number. 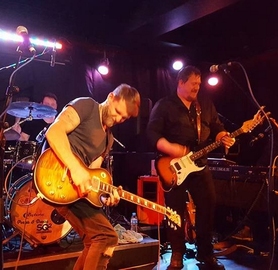 By contrast set closer 'Loving Might Do Us Good' made for a fun and funky-pop sing-a-long ending before a blistering encore of 'Going Down,' featuring Ben Poole and Steve Watts, did everything but raise the low ceilinged roof off the basement venue.

Poole and Nimmo exchanged bars of feisty licks so hot it’s a wonder the fire alarms didn’t go off, Steve Watts’ own solo hit a rolling groove as accomplished and vibrant as anything the gifted guitar slingers' produced all evening and Mat Beable and Craig Bacon drove the rockin’ blues standard to a rollicking conclusion.