Back in the Groove
Sweet - New York Connection 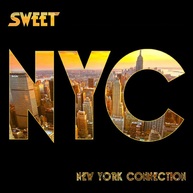 The Sweet, for many fans and/ or those of a certain age and era, were Brian Connolly, Steve Priest, Andy Scott and Muck Tucker.

Collectively, they were the classic British bubble-gum popsters who became archetypal glam exponents before maturing into consummate hard melodic rockers, all within the 1970’s.

But, inevitably, there were later variants of the band including Brian Connolly’s Sweet (who toured the UK and Europe until the singer’s death in 1997) and more recently Steve Priest’s Sweet, who perform Stateside.

But the real champion of the brand name is guitarist Andy Scott.

Since 1985 and initially with the late Mick Tucker (who died in 1991), Scott has toured almost continuously under the Sweet name but with a large number of musicians in and out of the ranks.
Scott’s Sweet have issued a number of live releases, recorded a couple of albums of new material and revisited the hits by re-recording some of the classic songs (the latter now almost mandatory for any band reintroducing themselves).

But when bands become brands, or transition to official tribute acts, that usually leads to one of two reactions from the fans – continued and highly enthusiastic support for the name, or limited to zero interest towards those using that name as a musical means to an end.

My Muirsical preferences and critical views put me in the latter camp, but in the case of Sweet it’s not through any disdain for Andy Scott.
Quite the opposite, I have all the time in the world for the guitarist who is an under-rated musician, genuinely nice guy and a true survivor of rock’s greatest decade.

It's simply that I haven't had much time for anything Sweet have done since the tragically under-heard Identity Crisis, released just after the band's original split in the early 80's.

But my interest in what Sweet were up to in 2012 was certainly piqued with the release of New York Connection.
Rather than try and write new material in the style of classic Sweet or re-record any more greatest hits, the band have put their 21st century Sweet sound over other artists material to produce a fun and rather excellent covers album.

The Sweet stamp on the songs covered comes courtesy of Andy Scott’s distinctive guitar work, the two and three part high-harmonies and backing vocals that were such a part of the original band’s music and a sprinkle of familiar Sweet riffs for good mash-up measure.

Andy Scott has stated New York Connection was put together simply for the enjoyment of it and that's borne out by the entertaining, interesting and sometimes quirky choice of material...

Indie rockers The Black Keys have their recent single ‘Gold on the Ceilings’ performed pretty faithfully, while the cover of ‘It’s All Moving Faster’ by modern punk exponents Electric Frankenstein has the added bonus of the guitar-line intro from Sweet’s own ‘Burn on the Flame.’

Classic rock makes an appearance by way of ‘Join Together’ (The Who) and ‘Shapes of Things’ (The Yardbirds), while there’s a Sweetified rock version (complete with ‘Sweet F.A.’ riff interludes) of the disco-pop song ‘You Spin Me Right Round,’ a UK chart success for Dead Or Alive back in 1985.

And then there’s the opener ‘New York Groove’ which, other than the interpolation of the chorus from ‘Empire State of Mind’ by Jay-Z and Alicia Keys (which works extremely well), is a close copy of the version recorded in 1975 by British pop band Hello.

Oh and point of note, kids – ‘New York Groove’ was written by Russ Ballard and was not originally made famous by (then KISS) guitarist Ace Frehley, who covered the song three years after Hello.

Interestingly, as Hello were trying to establish themselves as a hard pop and glam chart act just as Sweet had done a couple of years before them, Sweet were establishing themselves as a quality hard rock act with self-penned numbers such as ‘New York Connection,’ which gets a re-recorded airing here.

Revisiting ‘New York Connection’ is a refreshing change from presenting another re-recorded hit, but hearing the newer version, some forty years on from the original, reinforces the fact no-one can truly replace Brian Connolly (even Sweet didn’t try when they dropped their mercurial front man in 1979, continuing as trio).

That said, lead vocalist and bassist Pete Lincoln has a not too dissimilar tone and edge to his voice and is no bad singer.
And, just as the original band all featured as lead vocalists at one point or another, the other members of the current line-up get to add their voice to proceedings...

Keyboard player Tony O’Hora takes his lead from Patti Smith’s classic rendition of Bruce Springsteen’s ‘Because the Night,’ while Andy Scott is the featured vocalist on Velvet Underground's ‘Sweet Jane.’
Drummer Bruce Bisland then pops up – or power-pops up – to the microphone for 'Blitzkrieg Bop’ by the Ramones, which includes a six-string snippet from ‘Ballroom Blitz.’

But the icing on the covers cake might just be their rocked up version of the pop standard ‘On Broadway,’ previously recorded by The Crystals, The Drifters, George Benson and many others.
Sweet’s interpretation of the classic pop song is driven by a guitar line only a couple of steps removed from Andy Scott’s famous ‘Love is Like Oxygen’ riff.
It's a great song and the beefy guitar backing is a great touch.

Thirty years on from the original band’s last hurrah, Sweet, in the eyes and ears of many fans and ex-fans, still have an Identity Crisis.
But they are most definitely back in the groove.
And not just in New York.


The following audio track is presented to accompany the above review and promote the work of the artists. No infringement of copyright is intended.