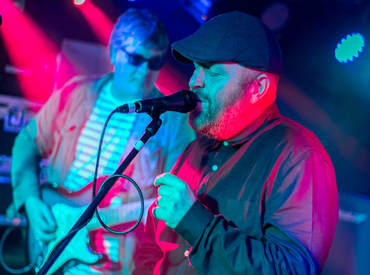 ​​Greig Taylor has been cited many times as not just one of Scotland’s hardest working musicians but one of the UK’s finest blues-based vocalists (he’s also one of the most genuine and passionate).

Although Taylor's various activities in the blues scene over the last five years or so have been deserving of their critical acclaim (two albums with GT’s Boos Band featuring guitarist John Boos (and an appearance on the BBC Four Television documentary UK’s Best Part Time Band), a short tenure with the Glasgow based Brian Rawson Band, acoustic blues project The Blind Lemon Gators) his new band The Greig Taylor Blues Combo is already shaping up to be the unit that delivers his best and strongest work to date.

That statement is something Greig Taylor fully believes to be true and one that FabricationsHQ and a very busy Dreadnoughtrock club can only wholeheartedly agree with, having borne witness to their impressive Band Launch show (delivered across two well-balanced but differently weighted 45 minute sets). 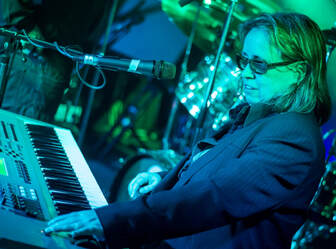 'City of Gold' (the 'Crossroads' styled number by the superb but short-lived BBM) was the perfect start to what was a mighty fine performance from a group of very talented individuals who have fused collectively in a very short space of time.
​
Following number, the groove-driven 'What Passes For Love' (by 90s blues rockers Storyville) showcased what this band are all about – a consummate blues machine with some serious weight and panache (Dave Cantwell and Al Jones are as much about the groove as the rhythm; Sandy Tweeddale absolutely shone on the night, from melodic remarks to feistier six-string sparks; Gill Hunter’s musicality (as regards knowing where to fill the sound and when to let a song breathe, coupled with her effortless but punctuating solos) were worth the admission fee on their own; Greig Taylor’s voice (not dissimilar to Joe Cocker in cadence and emphasis) was the smoky and snappy-blues vocal icing on the Combo’s musical cake).

​By the time the band hit a couple of reworked GT’s Boos Band numbers (the shufflin' r&b of 'Crucifixion Blues;' the slow blues showcase 'Baby Stop Your Crying') you would have been forgiven for thinking the 'Nought had just been transported lock stock and beer barrel from West Lothian to the Southside of Chicago.

Another GT's Boos Band rework, 'Steakhouse' (an up-tempo, guitar led (with a great little riff) second cousin of 'Smokestack Lightnin', complete with suitably Howlin' woo-hoos from Greig Taylor) also impressed, but not as much as 'God’s Problem Child.' 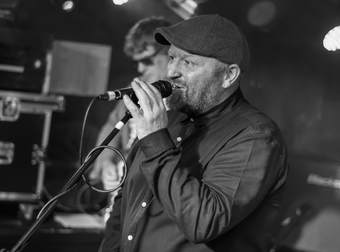 A lesser known Willie Nelson track (here featuring Jim Harcus and recently released as a single), Grieg Taylor's version of 'God's Problem Child' is deceptive in its seemingly simple but multi-layered simplicity.
And while the video that  accompanies the single helps frame the bluesy pathos of the song’s lyric, the live version is just as impacting through Taylor’s soulful and impassioned vocal.

If the first set was all about showing what this band can do on stage, the second set was all about the audience having a good time and those down the front proving, in fine feet moving and hip twisting style, that Saturday night’s alright for dancing.

Second set opener 'Personal Jesus,' a gritty, hard-hitting big-beat blues reworking of the Depeche Mode number (all of which made it the song of the night) was perhaps a surprise to the majority of the audience but it set the tempo for what was a bangin' second set that only relented for an original number, the melodic soul-blues ballad 'My Kind of Woman.'
​
The reimagined covers continued with a great take of Solomon Burke’s 'None Of Us Are Free,' which jettisoned the gospel flavoured style of Solomon Burke’s version in favour of an equally impressive but more funk based rendition (Greig Taylor delivering another great vocal over some cool organ flourishes and a serious rhythmic groove).
​
It’s quite the band that can cover the likes of Depeche Mode, Free ('Travelling in Style') and Buddy Miller ('Shelter Me') in the same set, but it’s even more impressive to be able to make them all work and make them your own.

A couple more GT’s Boos Band numbers were offered up (the rapid-fire 'Seven Questions' and a fully bluesified 'Real Born Winner,' the latter bringing the second set to a rocking conclusion) before 'Night Train' rattled down the Dreadnoughtrock tracks to well-deserved show ending applause from not just the front of stage crowd who had completely danced themselves out, but those further back who were just enjoying the vibe and buzz of the show, having caught sight and sound of an already tight and tidy band.

More importantly, bolstered by an excellent sound from the desk (each instrument was crisp, clean and collectively well-balanced; the show was also filmed and recorded) Mr Taylor and his talented ensemble made it clear that going forward, and given the opportunity, they will have something important to say, and a good-time role to play, in the British blues scene.