Do You Believe?
The King Lot – A World Without Evil 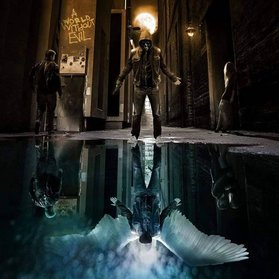 Classic melodic rock, in all its 80s bedecked big chorus glory and later, early to mid-90s variants (turning the amps down for the power-pop off-shoot and up to 11 for the metal sheened brand) still have their musical place, happily keeping company with the contemporary and usually edgier 21st century model.

Scottish melodic rock trio The King Lot managed to showcase all such styles on their self-titled debut album of 2015, albeit the band’s power-trio, keyboard-less sound gave each number an immediate, contemporary slant, from power down opener 'As They Burn' through to the lighter charm of the Jon Waite styled 'Ghost Of You' and on to acoustic country / melodic pop closer 'Queen of Hearts.'

The fact that The King Lot album was such a solid and ear catching outing was all the more impressive given it was based around not much more than lead vocalist and bassist Jason Sweeney carrying a collection of great little songs under his arm and having to put together a band in fairly short order (the talents of drummer and backing vocalist Chris "CK" Gillon and guitarist Michael Fairbairn) to lay the tracks down in the studio.

But as good as the debut was, from its ear-catching melodic hooks to the slightly heavier, riff-driven material, A World Without Evil is a whole different melodic ball game.

The most noticeable and significant change is the introduction of young guitar slinger Jay Moir, who has replaced Michael Fairbairn.
While Fairbairn was none too shabby on the ol’ six-string (and a perfect fit for the sound and style of what was, overall, a more lightweight debut), with Jay Moir the band have truly come of age; an undeniable talent to complement the melodically rock solid beats delivered by CK Gillon and the mid-range, treble bass punch and clean tenor vocal highs of Jason Sweeney.

Having bedded himself in over the last year or so with his band-mates, Jay Moir has also helped give The King Lot what is best described as a thicker sound, both live and, as proven unequivocally by A World Without Evil, in the studio.

Dovetailing with the evident chemistry within the band are the new songs, which are a step up in lyrical and musical weight from the debut.

All those traits are apparent from the get-go and the fittingly evil big riff that opens the title track, a gritty slab of world-view reality that delivers a melodic blow for good with its optimistic and uplifting chorus (and a howlingly good solo from Jay Moir that almost cries in sympathetic pain for the planet).
Additionally, the vocal outro from young Harrison Gillon (youngest son of CK Gillon) is an inspired, singing-for-the-next-generation touch.

If a band such as W.E.T. had come up 'A World Without Evil' (and it’s interesting to note Jason Sweeney has added an edge to his vocal verses, much like the great Jeff Scot Soto) critics and the larger body of melodic rock fans would be banging on about it being one of the heavy melodic rock songs of the year (which it is).

Should there be any worry that the band’s earwormery has been posted missing for album number two look, or rather listen, no further than following track 'All I Want,' a bright, brash and ridiculously infectious number that, in a different musical time and space, would be a staple of US rock radio (similarly the equally effective 'Save Me,' the heavy AOR and "whoa-oh"s of 'Lonely' and the rocking beat and chorus hook of 'Hearts on Fire').

There’s also a couple of numbers The Outfield would have been delighted to call their own back in their Billboard charting days, in the shape of the heavy power-pop of 'Missing You' and the slower tempo, high-voiced harmonies of 'The Letter.'

But The King Lot do more than flit between melodic hooks and hard AOR rock – there’s a spacious, earthy and distinctly edgy tone to the mid-tempo but powerful 'Damaged Girls' while the boys get heavy (to the point of bordering on grunge) on 'Outlaw,' a tale of lawlessness and "killing in the name of love," Jason Sweeney delivering his highest and darkest vocal moments.

The album closes with 'Maybe They're Watching Us,' the extra-terrestrial question that could be the other-worldly answer to the concerns voiced on the title track (the musical Yin and Yang of the album).
Similar in weight to 'A World Without Evil' and driven by Jason Sweeney’s punchy bass-line, the song is equal parts gritty contemporary rock and memorable melodic chorus, before the song outros with a perfectly conceived Maybe They're Watching Us meets X-Files whistle.

"I believe, in a world, without evil…" cries Jason Sweeney with genuine passion and vocal sincerity.

I wish I had your positive global future faith, Jason, but I most certainly believe in The King Lot and their ability to deliver some of the grittiest, thick sounding hard melodic power-trio rock you’ll hear along with earwormery that digs in so deep you'll need extended-length cotton buds to get the buggers back out.