The highest of platforms
The Mustangs – Just Passing Through 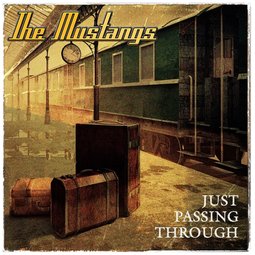 A delicate acoustic guitar introduction… Adam Norsworthy’s poignant line "Life’s a journey, in time we learn; one way ticket, no return"… a train-on-the-tracks rhythm from drummer Jonathan Bartley and bassist Ben McKeown… a wailing, Just Passing Through train horn from the blues harmonica of Derek Kingaby…

In just two minutes 'One Way Ticket' poignantly confirms The Mustangs eighth studio album Just Passing Through to be something very different, even beyond the diversified blues collection of the band’s seven previous studio releases – and quite the departure from the blues rock norm.

By the time The Mustangs have arrived at their destination on the piano, vocal and bell tolling 'How Short the Stay' thirteen tracks later you realise you have just heard, and experienced, something very special – a conceptually performed, passionately delivered and thoughtfully structured journey down the rail and song tracks of life; three score and ten years (and hopefully a lot more in this longer living day and age) encapsulated in forty six minutes of travel from embarkation to final stop.

As an introduction to the concept 'One Way Ticket' works wonderfully well but it’s also a brave and bold move – in normal blues rock circumstances an up-tempo or electric-led opener would be the obvious, attention grabbing starting point.
Which means second track 'Hiding From the Rain,' a bright and shimmering blues harp 'n' slide guitar number, would ordinarily be the opening album choice – but this is no ordinary album.

Side One (in old record vinyl terms, kids) of Just Passing Through is titled Love, epitomised by the melodically rockin' blues number 'Fingerprints' ("your fingerprints give you away, they’re all over my broken heart" is the love lost cry), the blues waltz 'Beautiful Sleeper' and the short chain-gang styled Side Love closer 'Cry No More' (with honourable mention to the finger pickin' country-blues 'Just the Way It Is' and the harmony pop-blues of 'Because it's Time').

Musically and lyrically Side One is the broken relationships and love affairs of Side Two’s Life, which opens in fine here’s to the weekend style with the big-beat and choppy chords of 'Saturday Night;' the optimistic Side Life opener is followed by the up-tempo, blues-poppin' fun of 'What Lies Within.'

'Vinegar Fly' is an edgier affair. A lock-down, steady rhythm from Ben McKeown and Jonathan Bartley support Derek Kingaby’s harp interjections and Adam Norsworthy’s beefy chords before the singer angrily declares "there’s a man in your life and it’s not me!" towards song’s end.

'Save My Soul' is a more traditional blues harp and guitar Mustangs number, making it the one song that could fit on just about any other Mustangs album (each track can stand in isolation but there is absolutely no question the conceptual sum is much stronger than the individual parts).

'Save My Soul' also carries a little film noire about it, so fittingly it’s followed by the semi-cinematic 'From Somewhere to Nowhere,' a gorgeous melodic slow blues that could easily be a roll the titles number for a road movie where the fates of Love and Life are decided by driving east or west or turning left or right.
The song also features some beautifully atmospheric and emotive guitar lines from Adam Norsworthy.

Even by their own high standards of interesting musical variation within a blues based framework The Mustangs, on Just Passing Through, have raised the bar (and it ain’t twelve bar, that’s for sure) a fair few notches.

This is an inspiring and thought provoking piece of work that ranges from the melancholic and bittersweet to the optimistic and life affirming – those looking for a handful of covers, a healthy dose of twelve bar boogie and a ten minute slow blues with an eight minute guitar solo have jumped on the wrong train.

Progressive blues? Conceptual, intelligent blues? Real life blues?
All the above and more, but to keep to the train-of-life analogy on what is a ground-breaking work in the field of modern British blues and blues rock, The Mustangs have just alighted on the highest of platforms.