Built for comfort...
THE SKY - Majestic 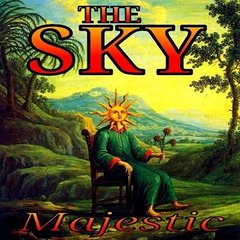 With Majestic THE SKY, fronted by singer songwriter and record producer Robert Fleischman, have picked up where the band’s excellent, self-titled debut left off.

But not in terms of THE SKY Part 2 or cutting a record from the same mould – Majestic encapsulates the musical energy of THE SKY but with an extended dynamic that adds a number of new layers to the band’s sound.

The spacey and, it has to be said, majestic ‘Breath Away’ opens the album in soaring melodic style but the song would also make a powerful closing track (nor would it be out of place playing over the end credits of a modern-era James Bond movie).

The following number, ‘Pill,’ is THE SKY at their most vibrant; a modern rock sound mixed with a hint of psychedelic 60’s chorus, all layered over a simple 4-4 beat.

THE SKY then get a little bluesy on the slow-burning groove of ‘One Day,’ the band’s new rhythm guitarist Ryan Lake throwing some tasty lead shapes across the song.

The Beatles-esque verses and heavy chorus of ’I Need It’ mesh extremely well (melodic pop dressed in hard rock clothing) while ‘Take Away’ expands on the Fab Four’s influence.
The latter comes complete with orchestration, a bridge straight out of the Beatles songbook and a lovely little solo from lead guitarist Brady Cole that could be a homage to George Harrison.

As the rest of Majestic unfolds the realisation dawns that, like 'Breath Away,' the majority of songs would make great album closers; it’s almost a surprise (albeit a pleasant one) to hear another song kick in as the previous one ends.

Majestic has its strongest songs contained within the first half of the track sequencing but in truth there are highlights throughout the thirteen track album.
For example ‘Little by Little’ has a "sure I’ve heard it before" quality about it but that’s down to a simple but ridiculously effective melody – and a three word chorus hook you’ll be singing or humming for the rest of the day.

‘One More Chance’ and ‘Poison Little Fingers’ pick up the pace and allow the band to rock out; the up-tempo pairing are tempered and separated by the acoustic-led ‘So I’ll Wait,’ a song which carries an ambience like no other song on the album.

Each member of THE SKY plays their part on Majestic – the aforementioned Brady Cole and Ryan Lake are already sounding like the perfect six-string partnership; drummer Andre LaBelle and bassist Steve Barber are a solid rhythm section.

On the debut LaBelle and Barber drove the majority of the songs along but on Majestic they lay the rhythmic foundations upon which the musical tracks are laid – they underpin the bigger sound and extended dynamic that includes orchestration and keyboard additions from Robert Fleischman.

But it’s the front man’s natural instrument that is the focal point – make that vocal point – of Majestic.
When Robert Fleischman first came to prominence in 1977 as Journey's first front man (preceding Steve Perry by nine months) he loudly and clearly demonstrated he had the "screamer" notes and range.

But Fleischman has more vocal depth these days and his vocal intelligence and melodic phrasing, crafted over the decades, are a far counter-tenor cry from Journey and the Vinnie Vincent Invasion.
Simply put, Robert Fleischman is singing better now than at any other time in his career.

Case in vocal point is final song ‘Sincerely Me.’
The simply arranged ballad highlights Robert Fleischman’s sense of melody and what a song needs; it all makes for a poignant finish and one of Fleischman’s strongest, yet understated, performances.

If there is a criticism to be levelled at Majestic it’s simply that its strongest trait – a plethora of great mid-tempo numbers – is also its weakness.
A host of similarly paced songs, albeit each with its own sonic subtlety, may have those who prefer the full throttle approach waiting for a shift in to top gear that never comes.

But that would be missing the point of THE SKY’s sophomore release.
Majestic is built for comfort, not for speed. It's an album that intentionally plays the slow-is-more card and requires a few listens to appreciate all the musical nuances.
And it features more quality closers than a Major League Baseball team’s bullpen.