Dehydration Me
The Treatment – Stereo, Glasgow, 10th May 2016 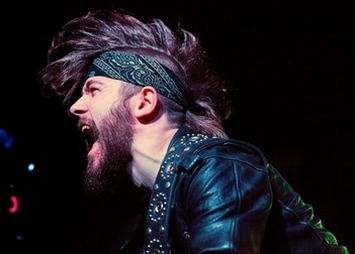 That was certainly the case with The Treatment’s visit to Glasgow on their Generation Me UK tour.

The Cambridge based band have picked up deserved critical acclaim for their third and by far best album to date and, by having Scottish rock trio The Amorettes as support (who carry a solid fan-base in Glasgow, one of the all-girl band’s favourite places to play) it was a gig that should have drawn a much bigger crowd.

That said, the Stereo’s basement venue hosting a rock gig, even a half full one, always brings with it atmosphere, sweat and plenty of dehydration – and on one of the warmest evenings of the year all three were in attendance.

It was intense, it was full-on, it was relentless – and that was just The Amorettes opening number, the pedal down riffage of 'Give 'em Hell.'
The Amorettes set was based around the band’s latest album Game On (plus an outing for debut album track 'Take Cover') and the trio – Gill Montgomery (lead vocals, guitar) and sisters Heather (bass, vocals) and Hannah McKay (drums, vocals) – certainly packed a lot of it into their 40 minute set.

The band kept the home crowd happy with a rapid fire burst of hard hitting rock, from the crowd chant and roll of 'Get What’s Coming' (think Joan Jett with amps turned to 11 and you’re pretty much there) to the set ending brace of 'Shoot From the Hip' and the chorus call and crowd answer of 'Hot and Heavy.'

The live energy of The Amorettes has never been caught in the studio (nor has there been enough solid song structure across an entire album) but with Thunder’s Luke Morley at the production desk for forthcoming album White Hot Heat (and primary songwriter Gill Montgomery co-writing three songs with Morley and one other with Ricky Warwick), it's an album that should represent just what The Amorettes are all about.

Meanwhile The Treatment are all about having a ridiculous amount of fun on stage and delivering forget-your-problems for an hour or so, high-intensity, melodically tinged rock and roll.

The Treatment’s set was geared to promote the current album, loudly and clearly confirmed by the opening one two raucous roll punch of 'Let It Begin' and 'Cry Tough,' but the energetic quintet: Emms, Grey, Dhani Mansworth (drums), Tagore Grey (guitars) and Rick "Swoggle" Newman (bass) also performed a handful of fan favourite songs from their first two albums.
​
Piledriving deliveries of 'The Doctor' and 'Shake the Mountain' from debut This Might Hurt shared set and stage space with the clichéd but crowd pleasing 'I Bleed Rock and Roll' and the swaggering title track of second album Running     The ever animated and bass bounding Rick Newman         With the Dogs, which gave the audience another   (embarrassed Duracell Bunny just out of shot)                   opportunity to belt out a chorus. 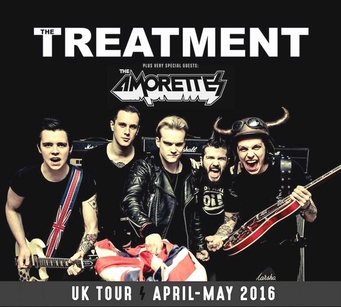 Throughout the performance the band’s front four interacted with the crowd, making connections stage left, stage right and centre – Tagore Grey and Mitchel Emms (on fine vocal form throughout the night despite a cold) were particularly animated as was Rick Newman, the bassist bounding from mid-stage to front of stage with an energy that would have the Duracell Bunny hanging his head in shame.
Tao Grey isn’t far behind them, though; he and Tagore Grey continually switched stage positions while dropping in to the occasional twin guitar harmony lines that add that extra little sprinkle to The Treatment’s riff-driven rock and roll.

For all the effect and presence of the front line quartet, the star of the show was drummer Dhani Mansworth.
Razor sharp on the night and leading from the back, Mansworth delivered the varying tempos with rock solid precision; his big, beefy beats were showcased to maximum effect on 'Bloodsucker' and 'The Devil,' two of the greatest songs peak-period AC/DC never wrote.

The title track of Generation Me was another highlight; its punky, contemporary rock vibe in complete contrast to the equally impressive, AOR themed 'Backseat Heartbeat' (the current single).

Finally, having encored with an extended audience participation version of 'Get the Party On' (brash British rock and roll meets US 80s glam), The Treatment took their bows, headed for the dressing room… and probably weighed themselves to see just how much they had lost in body fluid.

Because one of the hottest young properties in rock and roll had just performed, quite literally, their hottest ever gig.
And on a school night at that.