The Odessey continues...
The Zombies - Still Got That Hunger 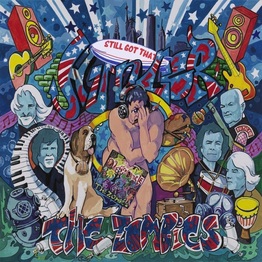 There can’t be many bands that can be described as iconic or legendary after only a handful of albums and an initial, relatively short-lived life-span that produced only two of those long players.

But when you’re responsible for one of the most acclaimed creative pop albums in musical history, two of the greatest pop songs of all time and are led by the voice of Colin Blunstone and piano, keyboard and song writing skills of Rod Argent, you deserve all the "iconic" accolades and "legendary" plaudits bestowed upon you.

The Zombies history is an interesting one.
The band formed in 1961 but had disbanded by the end of 1967, before their second album was released.

Although there was a Zombies album in 1991 the band wouldn’t officially reform until 2004 (Colin Blunstone and Rod Argent did reunite earlier in the Millennium to tour and perform, subsequently recording an album together in 2002).

In the intervening, Zombie-less years however the band’s second album, 1968’s Odessey and Oracle, along with the singles 'She’s Not There' (1964) and 'Time of the Season' (the latter lifted from Odessey) had gone on to make their mark in musical history.

But anyone thinking The Zombies, having done their bit for pop and rock five decades ago, have nothing left to offer or prove would be very much mistaken – because Still Got That Hunger is not just perfectly titled, it’s a bit special.

Lead-off single 'Moving On' opens the album with a vibrant musicality, a serious groove and a still rich and expressive Colin Blunstone vocal that belies his septuagenarian status.
Blunstone’s vocal leads the song while Rod Argent's piano line and the rhythm section of bass playing father Jim and drumming son Steve Rodman (members of the band since the reformation) provide the hard-pop swing.
Guitarist Tom Toomey, who joined the band in 2010, adds some bite and throws in a couple of short but feisty six-string remarks to play against Argent’s piano on the jazzy mid-song break.

'Chasing the Past' carries a slightly softer but no less appealing vibe and comes complete with an up-tempo, high quality pop chorus and a tasty solo from Tom Toomey that sits over Rod Argent’s organ backing.

'Edge of the Rainbow' delivers a beautifully crafted pop-blues that showcases Colin Blunstone and the bluesy piano chops of Rod Argent before the melodic light rock and simple but well-crafted harmonies of 'New York' kicks things up a gear.
The latter is a celebratory and reflective nod to the city that never sleeps and that Gerard Kenny named twice (and The Zombies do again, on the backing vocals).

Another reflective reminisce or two follows by way of a trip fifty years in to the past for a rerecording of The Zombies 1965 single and still a live staple 'I Want You Back Again.'
The jazz-blues number is followed by 'And We Were Young Again,' a smooth Steely Dan styled piece of soft rock sprinkled with some perfectly delivered, light and airy rock guitar lines from Tom Toomey.

'Maybe Tomorrow' is a fun piece of piano-led pop rock (with a cheeky "I believe in Yesterday" vocal sign off) while the warm, soft-AOR of 'Now I Know I’ll Never Get Over You' is a song, much like 'New York,' that's screaming to be heard on mainstream radio stations on both sides of the pond.

For all the fabulous slices of five-piece Zombies pop and rock on display Still Got That Hunger wouldn’t be any sort of album to feature the voice of Colin Blunstone and the piano of Rod Argent without it doing just that; 'Little One' provides the vocal and piano interlude in fine, jazzy lullaby style.

The full band return to close out the album with the 'Beyond the Borderline,' an absolutely charming and timeless piece of mid-tempo melodic pop that only The Zombies under Rod Argent’s musical guidance could have delivered.

The Zombies reformation in 2004 produced the album As Far As I Can See; seven years later came the far stronger Breath Out, Breath In.

Still Got That Hunger however, with a striking cover by Terry Quirk that recalls his design for Odessey and Oracle, carries more colour and musical texture than that critically acclaimed 2011 release.

It's an outstanding mix of melodic pop and jazz-tinged light rock but more importantly is also the best work to carry The Zombies name since the days of incorrectly spelled Odesseys and those pop-art times of 60s seasons past.

Ross  Muir
FabricationsHQ
Still Got That Hunger will be released on the 9th of October on Cherry Red Records.

The above audio track is presented to accompany the above review and promote the work of the artist.
No infringement of copyright is intended.  ​