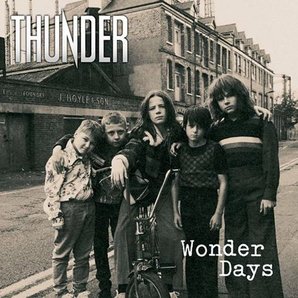 But then on Wonder Days the band do what they do best – delivering the sort of heavy blues rock and melodic power balladeering that first put them on the map twenty-five years ago.

And the time between albums (six years since Bang! a weak by Thunder standards release) seems to have worked for primary song writer Luke Morley, who may also have been invigorated by his partnership with Pete Shoulder in their twin-guitar outfit The Union (the band produced a trio of strong, blues-edged rock releases between 2010 and 2013).

Luke Morley also plays rhythm guitars and keyboards on Wonder Days, Ben Matthews having been side-lined during recording as he continued to rest and recover from tonsil cancer.
Morley’s six-string style brings a crunchier rhythm guitar sound to many of the numbers, including the pedal down rock and roll of 'The Thing I Want' (which carries a touch of mid-era Stones for good measure), 'The Prophet' (with a guitar rhythm and attack reminiscent of Heart's 'Barracuda') and the rock swagger of 'Chasing Shadows.'

Thunder, when at their best, also produce strong light and shade within their brand of blues infused rock and Wonder Days delivers with three fine examples:
A story of travelling west across the plains of the New World in search of claims and fortune is told on 'The Rain;' mandolin and acoustic guitars set up and complement the rhythmic groove laid down by Chris Childs and Harry James as Danny Bowes sings of hardship and the dry and dusty trail.
The heavier rock tempo of 'Resurrection Day' creates contrast by featuring lighter Byrds-like guitars and an uplifting chorus while the piano led 'Broken' has a bluesy, rock ballad framework and a bluesy, perfectly weighted vocal from Danny Bowes.

Bowes, the perfect vocal foil to the songs of Luke Morley, continues to be one of the most under-rated singers in rock – he also continues to defy the laws of rock vocality with a mid-tenor voice that seems to have lost nothing in terms of consistency, strength and delivery since the pre-Thunder days of Terraplane thirty years ago.

'Black Water' is a big, mid-tempo slice of ballsy melodic blues rock with a bad boy chorus that’s lightened by harmony vocal accompaniment while the hard-edged rock of 'When the Music Played' lyrically turns back time to the joy of discovering music under the covers with a radio and the love of your first vinyl records.
The song cranks up the volume and the amps in the middle section, throwing up unspecific nods to 70s era British heavy rock before returning to its original remark but with a lyric now in the present, Danny Bowes proudly declaring "I’m just happy that I’m old enough to recall when rock was young."

You and me both, mate.

The acoustic introduction to 'Serpentine' sets up the raunchy and rollin’ tale of love for a lady trading in the world’s oldest profession.
The song positively throbs (stop it) with a southern blues vibe, tipping its musical and lyrical hat to the tres hombres from Texas that gave the blues world 'La Grange' – in fact all that’s missing is a ZZ Top styled "haw haw haw haw" as the song romps its way out to fade.

The band’s sense of musical humour is present and correct on the fast and loose 'I Love the Weekend,' a raucous rock and roll closing statement with a short 'Train Kept a Rollin' styled into and a quick fire burst of 'Raz-Ama-Naz' styled riffing within.

Wonder Days is the band’s best album since the mellower, musically diverse and unfairly maligned Giving the Game Away sixteen years and five albums ago.

But in terms of sonic energy and musical muscle, Wonder Days is also a twenty-five years on follow-up to the band’s powerhouse brace of releases Backstreet Symphony and Laughing on Judgement Day.

Which proves that lightning can strike not once, or even twice, but three times.
And that's usually followed by the loud sound of Thunder.