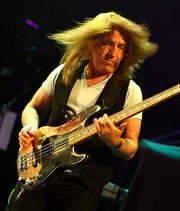 The Hull born musician was quiet, unassuming and even a little shy.
But behind what many perceived (wrongly) to be a grumpy misdemeanour was a very likeable man who, if approached, would happily engage you in conversation.
He simply preferred not to be in the public eye.

Musically, Trevor Bolder was a consummate professional and a lynchpin of one of the shortest lived yet most famous rock bands of the 70’s, the Spiders From Mars (far more than just David Bowie’s backing band).

He was also a mainstay of one of the most enduring hard rock bands in history, Uriah Heep.
Trevor Bolder joined Heep in 1976 and remained part of the band (other than a stint with Wishbone Ash from 1981 to 1983) until early 2013, when he stepped out for health reasons after an operation to combat pancreatic cancer.
He sadly succumbed to the illness on the 21st of May 2013, aged 62.

Such loyalty to one band is another old-school trait but more significantly “Tufty,” as he used to be known (due to the top tuft of hair that was part of his look during the Spiders and early Heep days), would go on to become one of the best rock bassists Britain ever produced.

Yet, sadly, one that remained extremely under-rated.

Trevor Bolder couldn’t help but get into music from an early age – almost the entire family and (quite genuinely) their aunties played instruments, danced or sang.
Bolder initially played brass instrumentation, primarily the trumpet (which made an appearance on David Bowie’s Hunky Dory album), and brass bands or R&B may well have been his future if not for his discovery of rock and roll and the Beatles.

Suddenly trumpets became guitars and, in Trevor Bolder’s case, the four-string variety (both he and his brother decided they wanted to play guitar but his brother didn’t want to play bass).

For all the Beatles were a huge influence on teenage wannabee musicians in the 60’s, Trevor Bolder’s inspiration came from blues rock bassists such as Jack Bruce.
Bolder had a rock edge to his playing from the very start and would develop in to a musician that could play lead bass, produce solid and consistent rhythmic playing or add a melodic groove, each with equal ease.

Trevor Bolder would be later influenced by Jaco Pastorius, a truly brilliant player whose jazz techniques rubbed off a little on Bolder’s blues based rock style.
As Bolder grew in stature and experience he would play more notes in the bass lines but never to the detriment of the song – still clean and precise, never cluttered or ponderous.

Trevor Bolder’s break came when he jumped in to help out guitarist Mick Ronson’s band The Rats, soon to become known as Ronno.
Ronson, another Hull musician, had already played with David Bowie and in 1971 Bolder replaced Tony Visconti in Bowie’s backing band, joining Ronson and drummer Woody Woodmansey.
They first played as a unit on Hunky Dory and one year later Ziggy Stardust and the Spiders From Mars became part of rock and roll history.

Bowie eventually distanced himself from the Spiders and Trevor Bolder went on to work with Mick Ronson (a truly gifted musician lost far too soon in 1993), playing on the guitarist’s acclaimed solo albums Slaughter on 10th Avenue (1974) and Play Don’t Worry (1975).

In 1976 Bolder got the call to audition for Uriah Heep, the recommendation coming from ex-Spider Woody Woodmansey (the pair had put a Spiders From Mars band together the year before and some two decades later were part of Cybernauts, a Bowie/ Spiders cover band formed in tribute to Mick Ronson).

Uriah Heep have had more than their fair share of band members, some of whom lasted a year or less, but Trevor Bolder was a great fit from day one.

Bolder replaced John Wetton but up to that point Gary Thain (a very jazzy player and a member of the band from 1972 to 1974) was still remembered fondly as an integral component of the classic Heep line-up and sound.

But from the first audition and subsequent rehearsals the band knew there was something special developing between Bolder and long-time Heep drummer Lee Kerslake.
Kerslake’s big and beefy drumming matched his physicality and personality and the Bolder-Kerslake tandem would become one of the best rhythm sections in hard rock history.
But, again, a sadly under-rated one. 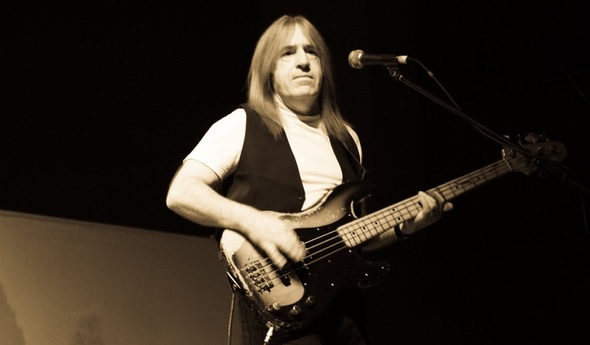 In 1980 Uriah Heep reached their musical nadir.
The turn of the decade had seen further personnel changes and the 1980 Conquest tour and later UK club dates featured a band that was a shadow of its former self.
One of the few redeeming features from that period however were the performances of Trevor Bolder –solid, professional and consistent within a unit that was falling apart around him.

Uriah Heep guitarist, founder member and ever-present Mick Box disbanded the group after the 1980 club tour; the idea was then to reform a new and improved Uriah Heep around Box and Trevor Bolder.
But things didn’t happen quickly enough for the bassist and Bolder decided to pay the bills by joining Wishbone Ash in 1981 (replacing John Wetton in a band for the second time in five years).

However when the opportunity came to rejoin Uriah Heep in 1983 and hook back up with Mick Box and Lee Kerslake (who had become part of the reformed Heep in 1982), Bolder jumped at the chance.

Trevor Bolder would go on to produce for Uriah Heep, wrote or co-wrote a number of songs across most of the albums he appeared on, contributed the occasional lead vocal and helped the band reclaim some of their former glories (1995’s Sea of Light is one of the band’s best ever albums).

But there is no doubt Trevor Bolder’s four-string skills and classic pose, running dexterous fingers across a Fender Precision bass or his signature TB D’Alegria Defender, are his defining musical legacies.

Ziggy played guitar.
But Tufty played rock bass.  And played it better than most.