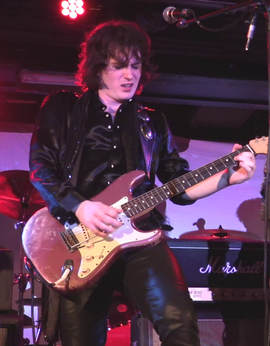 That singer-guitarist Kaleb McKane and his band played a song entitled 'The Great Anti-Climax' could be construed as telling, given that they opened with McKane’s strongest song 'Universe in Reverse,' a big sounding slice of guitar rock and psychedelia (with a hint of 70s space-glam and a soupçon of Lennon, Bolan and Bowie) that was also the lead-off/ title track from the 3-Track EP released earlier this year.

But opening with your strongest song doesn’t necessarily mean a weaker, downhill ride across the ensuing thirty minutes and half-a-dozen numbers – the wide and varying influences on display (everything from little splashes of 70s jazz fusion and funk to edgier New York Dolls riffage and Mott the Hoople-ised choruses), along with Kaleb McKane’s sonically shifting guitar treatments made for a very interesting set of songs, not least 'The Life I Chose Myself.'

The irony to Kaleb McKane supporting Uli Jon Roth now is that back in the mid-70s, when Roth and the Scorpions were first hoisting The Sails of Charon and about to Burn the rock Sky much further afield than Germany, Kaleb McKane's guitar and song stylings would have been a perfect support fit.

Forty plus years on, with Roth’s Scorpions era and later projects repertoire now etched in to the neoclassical and hard rock pantheon and a dedicated hard-core fan base backing him, it’s a harder support nut to crack.
But all credit to Kaleb McKane for being true to himself, having a musical soundscape like very few others out there and progressing toward what should be a very interesting debut album in 2019. 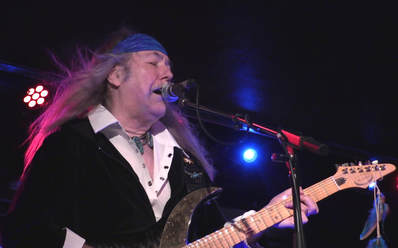 If there was any doubt that this was a 50th Anniversary celebration of Uli Jon Roth’s musical history and not another Roth era Scorpions extravaganza, those doubts were put to musical bed with an outstanding, seventy-five minute first set that featured only one Scorpions number, the Roth penned and decidedly bluesy 'Sun in My Hand' from In Trance.

Many believe Uli Jon Roth’s younger brother produced some of the greatest European hard rock with his band Zeno; it’s hard not to disagree with those thoughts through songs such as 'Eastern Sun' and the ballad 'Don’t Tell the Wind,' the latter featuring a striking and fluid solo from Uli Jon Roth on his "Mahogany Queen" Sky guitar (a necessary change of instrument, the acclaimed guitarist having popped a string while in full fretboard flow on Electric Sun's rock theatre styled number, 'Why?')

Oran Mor witnessed the first ever live outing of the "Mahogany Queen" and fair to say she performed royally. (Roth’s distinct guitar sound, tone and crystal clear high notes are in no small part due to his custom-built Sky guitars, their 35 full or half-step frets and scalloped fretboards; where you might expect the highest frets to produce notes only dogs could hear they are actually akin to the sound of the highest pitch violin strings).
​
Additionally, the unique sound of the Sky guitar complemented and dovetailed with the twin and triple-guitar harmony runs that featured throughout the two sets.​

​Rounding out the first set was Ian Gillan’s 'A Day Late and a Dollar Short' (Uli Jon Roth played on the original studio recording) and ten-minute, set closing highlight 'Enola Gay (Hiroshima Today?').
The Electric Sun song, featuring guest singer Liz Vandall on the opening vocal stanza, is an ever-shifting but hard hitting number that reflects on the never-to-be-forgotten Enola Gay bomb-drop on Hiroshima and Nagasaki in 1945 – the howls and bomb-blasting roars of Uli Jon Roth’s guitar during the ‘Attack’ section were as chilling as they were striking. 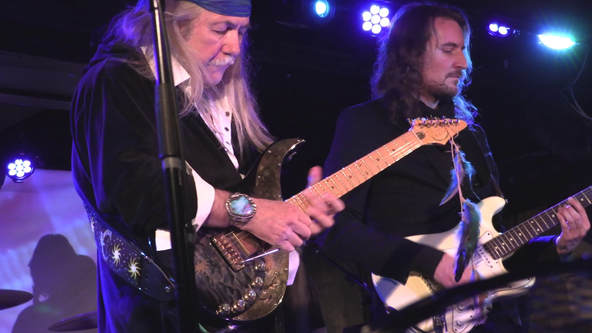 ​The second set started in far more sedate circumstances with Uli Jon Roth performing solo on a newer composition, the instrumental 'Passage to India,' on his electro-acoustic 8-string Sky guitar.

As the band returned to the stage there was a hugely appreciative welcome for not just the rest of the group but for the very guitar Uli Jon Roth played at his first ever gig as a thirteen-year-old fifty years ago, and the song every budding teenage guitarist had to learn as a right of six-string passage back then, The Shadows 'Apache' (the only thing missing was the "Shadows Walk").
It was only then, after the Shadows had disappeared from the stage' that the spot-lit Scorpions showcase began.

The six Scorps’ numbers – 'The Sails of Charon,' 'We'll Burn the Sky,' 'Pictured Life' (the latter pair featuring Liz Vandall), 'In Trance' (with an outstanding, rangy vocal from Niklas Turmann) and deeper Virgin Killer cuts 'Catch Your Train' and 'Yellow Raven' – featured bassist Simon Foster and drummer Michael O’Reily giving it plenty, extra rock and roll crunch from the three guitars (and the keyboard punctuation of Corvin Bahn) and a crowd in full voice.

Final numbers 'All Along the Watchtower' (based on the Hendrix cover, natch) and a near ten-minute 'Little Wing' brought to close a two hour and twenty minute show that, frankly, could have featured only a couple of Scorpions numbers and been no less impacting or impressive.