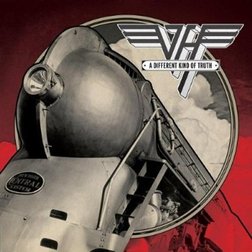 In many ways A Different Kind of Truth is exactly the release you would expect from a long-awaited and highly anticipated Van Halen with Dave Lee Roth recording, the first full-length studio album to feature the band's original singer since the hugely popular 1984 of twenty-eight years ago.

The 2007/ 2008 reunion tour with Roth rather obviously and understandably featured a set-list of the band’s best material from the original and, for many, definitive period of the band’s musical history, 1978 to 1984.

The new album steps even further back, built on a heavy rock-based foundation of some of the best but never released material from Van Halen's pre-debut record years, circa 1975-1977.

And those familiar with the 1977 Warner Brothers Demos or the Zero Recordings of 1976 (produced by Gene Simmons and the pre-debut debut album by any other name) will also be familiar with a number of songs on A Different Kind of Truth.

Even if you weren’t aware of the new album’s old musically history, a couple of ex-Van Halen-ites were only too happy to let you know...

Bass player Michael Anthony was as much a part of Van Halen as the VH brothers themselves until he was told his services were no longer required after the 2004 tour (which featured Sammy Hagar back at the mic after an eight year separation from the band).
Anthony confirmed what many already suspected when he spoke at the start of the year about some of the new songs coming from some of their oldest songs.

Sammy Hagar had made similar comments towards the end of 2011, mentioning he had heard the next Van Halen album would be based on old material.

Those claims were proven when the first single, ‘Tattoo,’ was released a few weeks before the album – the new tune is a reworking of ‘Down in Flames,’ a song that was only ever played live back in 1977.

So, an inspired idea (suggested by Eddie Van Halen’s son and VH bass player Wolfgang) to capture the classic, original Van Halen seventies sound, or an easy way to produce an inevitable Top 5 Billboard album based as much on the hyped-to-the-max pre-release publicity as the music itself?

Heading back to the past in the present to create a future is not new.
In recent years a number of rock bands have intentionally written new material to sound like their classic material, riding the wave of resurgence in both classic rock and their own careers. KISS are a perfect and highly successful example.

In the case of Van Halen, they had the luxury of an abundance of early, unreleased recordings and demos to tap in to for inspiration and the end product confirms loud and clear that this three-and-a-half decade old Van Halen are alive and well in the 21st century.

The aforementioned ‘Tattoo’ is the perfect opener.
Taking its lead from ‘And the Cradle Will Rock’ (in tempo and vibe, not song similarity), Van Halen announce their return with a sassy swagger and the most rock radio friendly tune on the album.

‘She’s the Woman,’ one of the best tracks from the original 1976 demos, follows ‘Tattoo’ and is a song that could have and should have featured on an album like Van Halen II.

‘You and Your Blues’ raunches the roll complete with a hooky, melodic pre-chorus before the band kicks it up a gear or three and Alex Van Halen kicks out the double bass drum beat as they steamroller through ‘China Town.’

Similar to fan favourite ‘Hot for Teacher’ from 1984, ‘China Town’ powers along at the pace of that classic VH track, but ‘Teacher’ is perhaps the best ever example of Van Halen at maximum velocity.
Songs like ‘China Town' have their place but that's a hard act to follow and a further dilution is the fact there are other, similar songs on the album, such as 'Bullethead' (another old song) and the quirkier and better 'As Is.'

Far more interesting is ‘Blood and Fire.’
The song takes its lead (guitar) from an old and rare Eddie Van Halen instrumental piece called ‘Ripley,’ but has been re-written to become a complete band song.
Its mix of the hooky melodic and heavy Van Halen (it would have been a great fit on an album like Diver Down) works extremely well and is one of the  best songs on the album.

‘Honeybabysweetiedoll’ is another interesting track but tries a little too hard to be different.
Incorporating a number of tempo changes behind an almost constant run of guitar riffs, angular lead work and some Roth spoken-word lyrics, it ends up too disjointed and discordant.

‘Stay Frosty’ could have been the stand-out track but strays too close to becoming an ‘Ice Cream Man’ clone with its acoustic introduction and rollicking roll core.
If it had retained its lighter groove and created a vibe similar to ‘Could This Be Magic?’ from Women and Children First it would have produced a nice change of pace and shone even brighter.

Some of the strongest songs are re-workings of numbers that originally appeared on the Zero demo album (and were also recorded for the Warner demos).
The fast and frenetic 'Outta Space' began life as 'Let's Get Rockin' while ‘Big River’ was originally ‘Big Trouble’ before it was rebuilt with new lyrics.
And the big 'n' brash mid-tempo closer 'Beats Workin' has its origins in ‘Put Out the Lights.’

Taking demos or long-forgotten tracks as inspiration for later material is quite commonplace and it's hardly a first for Van Halen. Two notable examples are ‘House of Pain’ (a Zero demo that was reworked and re-recorded for 1984) and ‘Last Night.’ The latter is a 1977 demo that became ‘Hang ‘em High’ five years later, featuring on Diver Down.

As it turns out, basing A Different Kind of Truth on songs gathering dust on a demo tape or early live bootlegs was an inspired idea and makes for a good album.
But not a perfect one.

The majority of reviewers, critical appraisals and Van Halen die-hard fans (both old and new generation) will already be calling this the second coming, one of the band’s best ever albums (if not the best) and citing each and every song as a 5-star effort.

But that’s also A Different Kind of Truth. One seen as the Gospel according to the Van Halen faithful.

But what is unarguable is A Different Kind of Truth proves you can teach an old song new tricks. Actually, a lot of old songs new tricks.

And Eddie Van Halen can still shred on a six-string and throw some serious shapes around the fretboard.


The following audio tracks are presented to accompany the above review and promote the work of the artist/s. No infringement of copyright is intended.