​Is there anybody out there (wanting more)?
Visions of Floyd, National Concert Hall, Dublin, 8th August 2016 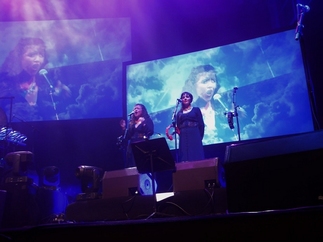 One year after forming, Pink Floyd tribute Visions of Floyd took to the National Concert Hall stage in Dublin to ask "Is there anybody out there?"
The capacity crowd let the band know loudly and clearly that not only were they there, they were with them for every note and visual moment of the band's debut show.

The band played their hearts out throughout a set that included The Dark side of the Moon in its entirety, a number of favourites from Wish You Were Here, The Wall and Division Bell plus a few songs you wouldn’t expect to be played at a Pink Floyd tribute band gig.

Song choice surprises included 'Fearless' from Meddle (which carried the audience up the hill that was not too high to climb) and 'On the Turning Away' from A Momentary Lapse of Reason.
The latter number, a highlight of the show, started low and tentative but built steadily throughout to a splintering guitar and vocal strewn ending.

Visions of Floyd’s visuals were as impressive as their musical performances.
Three screens behind the band displayed unique imagery designed by the illusive Dr D who is reportedly a Canadian scientist in his seventies who creates complex, computerised images as a side line.
Those images not only enhanced each song, they added a unique Irish essence by parodying various iconic Pink Floyd images, such as the power station near Dublin substituting for Battersea Power Station as famously featured on the Animals album cover. 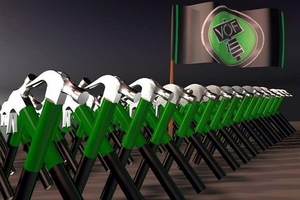 The visuals, combined with a first rate lighting crew who work closely with the band, added to the emotion and intensity of each song; striking imagery included American Civil Rights marches, napalm attacks in Vietnam and lone figures standing in front of tanks at Tiananmen Square.
Live feeds of individual band members were also displayed on the screens throughout the concert.

The pitch perfect vocals of 'The Great Gig in the Sky' just before the break left the audience clearly wanting more, but the big question at any Pink Floyd tribute band concerts is always "will they do Comfortably Numb as the encore and will they be able to carry it off?"

The answer was a resounding "yes!" to both questions, resulting in a standing ovation for Visions of Floyd from an audience that clearly knew every note of this timeless classic (one personal gripe – and it’s a small one – I missed the mirror ball with lights bouncing off of it all around the room…)

From the complex drum patterns of 'Time' and the precise and emotive guitar playing from both guitarists, to the driving bass (including intricate fretless) and pastoral keys on 'Shine On You Crazy Diamond' to the soaring, angst ridden then soothing vocals featured in 'The Great Gig in the Sky,' Visions of Floyd, on this debut performance, sent a message to other, more well-known touring tribute bands that they are a Floydian force to be reckoned with.

"Green Hammers on the March" is the Hash Tag on the Visions of Floyd 12,000+ Facebook site.

Following the blistering inaugural performance at the National Concert Hall in Dublin the Green Hammers are now truly ready to march – and if you are lucky they will be marching your way soon.