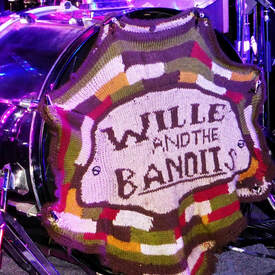 A small basement music venue under a bar-restaurant a few miles out of the city centre on a mid-week evening can be a recipe for disaster these gig-going days.

All the more satisfying then that said venue – the Hug & Pint in Glasgow – was packed for a double dose of genuinely individualist blues rock.

But the question arises of just how good can bands be if they are playing in a small basement music venue under a bar-restaurant... (continued as above).
The answer in this case is excellent and exceptional (in support and headline order), the chosen venue being more to do with tour routing and availability than the clear and obvious talents of the Rainbreakers and Wille & The Bandits.

Such a venue is also an indicator of how hard it is to get the attention, audience numbers and recognition so many bands on the burgeoning (but bloody hard slog) British blues rock circuit deserve.

Shrewsbury based Rainbreakers are a 60s and 70s soul-blues meets R&B (with a little psychedelic and garage thrown in for good measure) "deserve better" case in point.

Even after only two EPs and a debut album the Rainbreakers should be doing far bigger business, primarily because while first EP Blood Not Brass showcased a band with plenty of potential, second offering Rise Up was a psychedelic and soulful shift beyond.
And then there's Face To Face, a seriously tasty offering (cited as one of the blues/rock based albums of 2018 by FabricationsHQ) that sees the band truly hitting their soul-blues stride.

Given the quality of Face to Face it was no surprise the album was the focal point of the Rainbreaker's short but impressive (and vociferously received) half-hour set.

'Heavy Soul' is a bombastic set (and album) opener that swaggers with the soulful depth that has become part of the Rainbreakers signature sound, while vocalist and rhythm guitarist Ben Edwards delivers his personal lyric of good intentions being stifled by the not-talked-about-enough topic of depression and mental health.
"Heavy soul, sinking with a heart of gold!" cries Edwards, with a particularly impassioned final line.

But it’s not all about the Rainbreakers soulful rock weight – 'Get Me Where She Wants' is a funky little number that delivers melody and choppy guitar punch in equal measure while 'Lost With You' is unashamedly a
soul-pop-blues love song that showcases just how good a lead guitarist Charlie Richards is (and that’s very good indeed).

The band’s near ten minute rendition of Gary Clark Jr’s 'When My Train Pulls In' never fails to impress (again featuring Charlie Richards, this time in full blown soul-blues six-string crescendo) while pacey set closer 'Ain’t Nothing Goin' On,' originally from the Blood Not Brass EP, has found an even fuller bodied and feistier home on stage and as part of Face to Face. 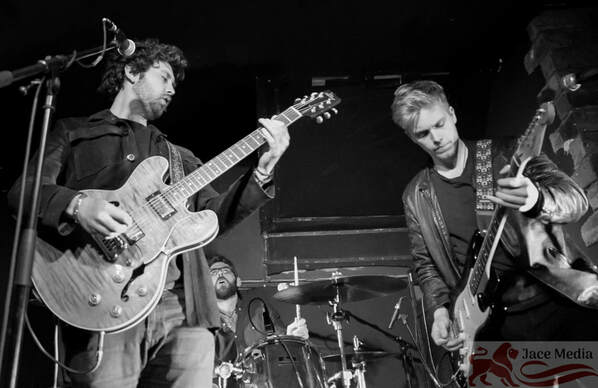 Face to Face with the Rainbreakers; colourful soul-blues R&B psychedelia, even in black and white
​Wille & The Bandits are another band where eyebrows would have been raised at the consummate and multi-styled blues trio playing a small basement venue.

That Paths is by far the Cornwall based band’s most accomplished release to date (and one that manages to capture the band’s live energy) meant starting the set with six Paths songs in the first seven numbers wasn’t so much a brave or bold move as a highly impacting and sensible one.
(that seventh song was an uber-cool version of 'Black Magic Woman,' Wille Edwards shining on lap steel while Matt Brooks brought the six-string bass groove and Andrew Naumann provided the tribal Black Magic via tongue drum percussion).

From the triple salvo opening of 'Victim of the Night' (a bluesy AOR number that has more bite live), the big groove and funky guitar and bass lines of 'Make Love' and 'Find My Way,' which cranked up the fuzzed guitar and blues rock amps, Wille & The Bandits could do no wrong with a set that, over the ensuing ninety minutes, produced well-balanced rise and fall, emotive power and high energy.

The outstanding 'Watch You Grow' (a mellow pop-blues to the joys and trials of parenthood) featured a clever and interesting combination of tongue drum and lap steel over a repeating bass line before 'Judgement Day' (inspired by the TV series The Wire) came calling to emphatically underline why Wille Edwards has the Joe Bonamassa seal of six-string slide approval.

By contrast to the soul blues of 'Judgement Day,' 'Keep it on the Down-low' brought ultra-funky, hip hop rap blues to proceedings. 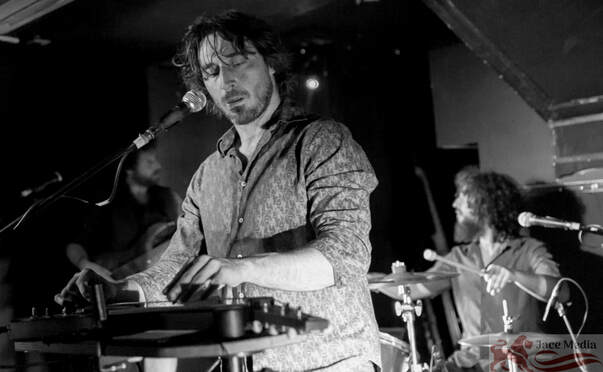 But it was another two songs from Paths that truly made a mark, reinforcing just what as strong album it is.

'One Way,' a foot-stomping slice of bottleneck guitar blues, was extended to feature a good humoured guitar duel, compered by Andrew Naumann.
Each night Naumann, in suitably bellowing demonic voice, ad-libs the insulting introductions – this time around the combatants were announced as "holding the record for the longest time wearing the same pair of pants!" (Mr Edwards) and "the record for length of time wearing a training bra!" (Mr Brooks).

Such fun and loose impromptu moments aside, Wille & The Bandits are as collectively tight-knit as the woollen logo that adorned the bass drum.

They are also one of the most individualistic acts on the blues rock circuit.

Further, the Paths laid by Messrs Edwards, Brooks and Naumann on this tour and on the new album should pave the way to further success.