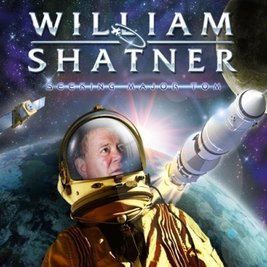 There’s an argument that, with Seeking Major Tom, William Shatner has finally done the album he always should have.

But there’s perhaps an even bigger argument for a galaxy-wide restraining order that prohibits Mr Shatner from being within a light year of any recording studio, especially after his first release some 43 years ago.

The Transformed Man, released in 1968, contained covers of contemporary pop songs and a number of Shakespeare monologues.

Shatner’s over-the-top melodramatic narratives (an exaggerated form of the vocal mannerisms he portrayed as Captain Kirk in Star Trek) didn’t exactly have the true Shakespearean actors shaking in their stage boots, but that’s not what had so many music fans and critics shaking their heads…

Shatner’s cover of 'Lucy in the Sky with Diamonds' made both artist and album infamous in musical circles.
His interpretation of that classic track is generally regarded as not only the worst ever cover of a Beatles tune, but a contender for worst ever cover, period.

In 2004 he fared a lot better.
Has Been, arranged and produced by Ben Folds with most songs based around Shatner’s prose-poems, had a narrative pop style that was fairly well received.
His cover of Pulp’s 'Common People' (featuring Joe Jackson) garnered some deserved critical acclaim.

But that, you would think, would be that for William Shatner’s musical career.

So it was quite a surprise when Shatner himself confirmed early in 2011 he was recording another album.
The now 80 year old Captain Kirk went on to state that not only was he putting together a collection of classic pop, rock and heavy rock space themed covers, the tracks would include an impressive list of guest musicians.

The statement was initially taken with a large amount of space-salt, especially as time went on without any further news, but once the track listing was announced (along with the musicians performing on each track) it was clear Seeking Major Tom would indeed be beaming by download (and released as a 2CD set in the US on Cleopatra Records) to an iPod or CD Player near you.

The biggest surprise however is that Seeking Major Tom has some very listenable Shatner narratives, decent production values, some great musicianship and an interesting music-based science fiction concept threaded throughout the work.

Hence why rather than being disregarded here at FabricationsHQ, it has made it to a featured review page. And therefore one of my favourite albums of the year.

For those still reading or at least not laughing so hard they can’t read the words, the title of the album sums up the conceptual theme.

Shatner, for the most part, is playing the part of Major Tom (the famous character from David Bowie’s 'Space Oddity' and later references) as he drifts through the star-fields and blackness of space, on a journey of narration and music.

The album opens with ‘Major Tom,’ originally written and performed by science fiction synth-pop composer Peter Schilling.
Featuring guitar from Nick Valensi of The Strokes, it’s the perfect musical prologue to the album and segues (via some “Houston Mission Control” dialogue) into ‘Space Oddity.’

Shatner definitely puts his own vocal stamp on the Bowie song (which features lead guitar from Ritchie Blackmore), but therein lies the problem…

Great music and great musicians' aside, this is still a narrative driven concept.
For every listener who can appreciate or at least accept the style, another will see that “stamp on the Bowie song” as stamping all over a classic.

Similarly, Shatner’s take on ‘Bohemian Rhapsody’ will have the Queen aficionado’s running to put their phasers-on-kill.

Yet I find the hard-to-listen-to songs are in the minority because overall song choice, quality of musicianship and the quirky spaced-out themes mean the tracks that work are very listenable. And some of them are actually very good.

Personal favourites are ‘Space Cowboy’ (featuring country rock singer Brad Paisley), ‘Spirit in the Sky’ (with some tasty six-string touches courtesy of Peter Frampton) and ‘Space Truckin.’
The latter sounds like Shatner and guest musicians Ian Paice and Johnny Winter are having way too much fun in this shout-a-long cold night in space cover.
And good on Ian Paice for throwing some new percussive shapes over a heavy rock classic he originally appeared on.

Other notable tunes making an appearance and getting the Shatner touch include ‘Rocket Man,’ ‘Walking on the Moon,’ ‘Silver Machine,’ and ‘Iron Man.’
Shatner actually sings – well, to a degree – on the Black Sabbath classic (with vocal backing and guitar work from Zakk Wylde) and his rough delivery suits the song.

'Planet Earth’ closes out the album and the Duran Duran song works well as a finale, acting as an ending where Major Tom has perhaps found his way home.

Some less well-known but no less great rock tracks also feature, including Golden Earing’s ‘Twilight Zone’ and ‘Empty Glass’ by Canadian rock band The Tea Party (with its lyrical nod to Major Tom and other Bowie tracks).

But it’s not all modern pop or heavy rock. ‘Lost in the Stars’ by Kurt Weill (covered by Frank Sinatra amongst others) features Shatner at his most serious and comes complete with saxophone accompaniment by legendary jazz musician Ernie Watts.

So much for the travels of Major Tom, what about the missus?
That’s covered here too, on the only song not to feature Shatner...

Sheryl Crow takes the role of the worried wife on ‘Mrs. Major Tom,’ a song done originally by electronic music artist K.I.A (writer and producer Kirby Ian Andersen).
Here it works as an interlude or closing statement to what is, in effect, the end of Side One (or CD1) of the album.
It’s a lovely little song and Crow delivers a beautifully sincere vocal.

As much as I have warmed to Seeking Major Tom, it's too long at 90 minutes (some of the numbers have been revisited to enhance the drifting in space theme).

A 60 minute 12 track album would have made more impact than the 90 minutes and 20 tracks we have here – or would have been more sufferable, depending on your musical perspective.

And although I like and enjoy many of the songs, there are some I won’t be revisiting. Top of that list is 'Bohemian Rhapsody,’ which sounds like Shatner took his inspiration from The Muppets version. Which is fine. If you're The Muppets.

Some will find Seeking Major Tom amusing or quirky.
Others will like it while many will absolutely loathe it.
But one thing’s for sure – it is a unique set of covers.

Because the undeniable fact is when Bill Shatner walks into a music studio and the microphone is turned on, he doesn’t sound like any old Major Tom, Dick or Harry.


The following audio tracks are presented to accompany the above review and promote the work of the artist/s. No infringement of copyright is intended