Music is a powerful tool and is certainly good for what ails you.
And proof of that, if proof were needed, came compliments of Wolfstone and support Cherry on the Cream at the Festival Theatre in the lovely town of Pitlochry.

Pitlochry is also one of the few places where I find I can switch off, forget the stresses of real life for a while and completely recharge, so it was no coincidence my wife and I found ourselves there for a short break in September.
At the same time Wolfstone were playing.
And not for the first time.

The beauty of this particular Wolfstone show wasn’t just the unwind and the lovely surroundings (the theatre sits by the side of the River Tummel just outside of town), but the fact the band had given the set an overhaul.
They dusted down some songs not played for fifteen years or more, re-introduced a few old favourites and brought back an acoustic set in the middle of the show.
There was also more of a rock vibe to the gig, due in part to the song selection and performances, even with the acoustic set dropped in the middle.

As regards the musical vibe created it’s also fair to say it didn’t do any harm to have the Skye based group Cherry on the Cream open once again.
A popular and infectious act, the pipes-fiddle-guitar trio performed a short set of reels and tunes that delighted the Festival Theatre audience.

The theatre itself is a beautiful venue, but fully seated, and usually hosts what is best described a traditional theatre audience for traditional theatre shows.
Not exactly perfect for a Wolfstone gig where standing room is usually essential for the mandatory jigging, dancing and general making a fool of oneself.
However on this particular occasion the audience most certainly picked up on the energy and vibe described earlier and there was a lot of movement, even with the limitations seating brings.

‘Quinie fae Rhynie’ opened proceedings as it has done for a couple of years and is a great tune to set the tone, driven by the introductory riffing of guitarist Davie Dunsmuir.
‘Queen of Argyll’ followed, featuring Stuart Eaglesham in fine voice. Eaglesham had been carrying a slight cold but it didn’t show or cause him any vocal problems on the night. The Wolfstone singer and acoustic guitarist also featured prominently during the acoustic set…

That section of the show featured a beautiful rendition of the instrumental ‘Hector the Hero,’ stripped back to a duet showcasing Duncan Chisholm on fiddle accompanied by Eaglesham on guitar.
There are many great fiddle players and many great exponents of traditional Scottish or Celtic airs, but Chisholm truly gives his instrument a voice, right down to the vibrato created at the end of the poignant or emotive notes.
‘Hector’ was a true highlight and crowd favourite of the night.

Stuart Eaglesham then performed ‘No Tie Ups’ solo, with only the crowd for backing vocal support, before being joined by Chisholm, bassist Colin Cunningham and drummer Alyn Cosker for a rendition of ‘Here is Where the Heart is.’
The two songs just mentioned were welcome and interesting additions to the set, having not been heard live for over a decade and originally sung by Ivan Drever during his tenure in the band.
Eaglesham’s lighter lilt brought a fresh vocal perspective to the songs whilst still honouring the originals.

It wasn’t all about the older material, however.
Wolfstone recently recorded two new songs, both of which have featured in recent set lists and the tunes were performed at this show.
'Time for Walking’ sounded tighter and at its most complete, no doubt courtesy of the recent studio workout while ‘Back of Beyond’ (originally recorded by Irish band Gráda) has been fully Wolfstoned, complete with new, trademark Wolfstone intro and outro.
Both songs sit more than comfortably with the classics and should be available for download through the band’s website in the not too distant future.

The rockier edge to the show mentioned earlier was courtesy of set selection, a sharp sound with chunky guitar chords and riffs up front and Alyn Cosker in rock mode, driving the songs along from behind the kit.
Cosker is also the resident drummer with The Scottish National Jazz Orchestra and leads his own Jazz Trio, but on the night didn’t throw as many jazz-orientated shapes around the kit as usual.
Even his drum solo was more rock and roll than playing off the beat, but then this is one very talented drummer, as comfortable playing jazz or funk as he is pop or rock.

The drum solo led onto the set closer ‘Ballavanich,’ truncated to its up-tempo second section due perhaps to time curfews or just to keep that aforementioned rock tempo on the rise.
It certainly got the audience on the rise, who were on their feet by the encore and ‘Gillies.’

‘Gillies’ never fails to disappoint and its introductory lament performed by long-time Wolfstonian and piper Stevie Saint still brings the hairs up on the neck the Scottish blood pumping.
The encore also had the crowd laughing when the band reappeared to perform ‘Gillies’ while wearing hats they had found in amongst the backstage props (well, I did mention this was a proper, traditional theatre). 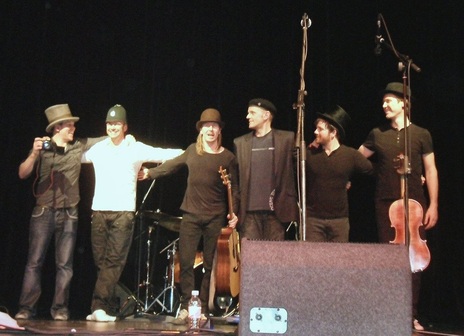 Top hats and bowlers were the preferred choice but Stevie Saint in a policeman’s hat and Duncan Chisholm – who clearly drew the short straw – performing 'Gillies' in a beret, is a sight that the audience, and possibly even the band, are not going to forget in a hurry.

Which all goes to prove Wolfstone wear many hats.
Individually talented and collectively none better when it comes to Celtic folk 'n' roll.
The musical antidote to the stressed-out blues sung lately, and the ability to cure the Writer’s Block I had been carrying for a month.

We sung-a-long, we clapped, we appreciated, we listened, we laughed.
Although I’m pretty sure the latter was down to the hats.
And the beret in particular.