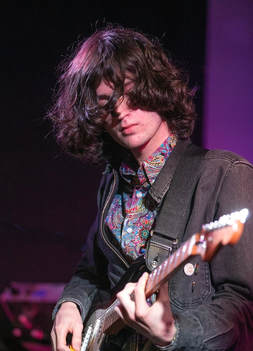 Rigid Soul's Kyle Hood
Considering Rigid Soul were an 11th hour call up as support to Zal Cleminson’s first appearance in the South Ayrshire coastal town of Troon, the young local band (from just down the road in Prestwick, home of FabricationsHQ, don’tcha know) featuring guitarist/ vocalist Kyle Hood and drummer Lewis Ross (the pair are still on the search for a permanent bassist) did a fine job with their short opening set of blues rock.

Messrs Hood and Ross, on the night accompanied by bassist Norrie Dickson, already have a King Tuts performance under their musical belts as well as an EP entitled Head in the Clouds.
​
The title track of that EP, featuring a 60s styled arrangement with melodic blues-pop appeal, was a highlight of their thirty minute set as was the instrumental 'Scott’s Boogie,' which allowed the band to jam out a little while keeping to a tight and funky, fast-fingered groove.

While such tracks were more than worth a listen, there is no question their capably handled cover of Black Sabbath’s 'Fairies Wear Boots' (here more 'Fairies Wear Heavy Blues Boots') unsurprisingly got the biggest applause and the most attention.

As confidence grows, and once a permanent bassist is installed, Rigid Soul might well be a band to keep an eye on in Ayrshire and one that, perhaps next year, gets to appear on the showcase Jagermeister stage at Troon's WinterStorm Rock Weekender.

While Rigid Soul are still virtual unknowns outside of South Ayrshire, Zal Cleminson needs no introduction to any rock fan across all of Scotland and much further afield. 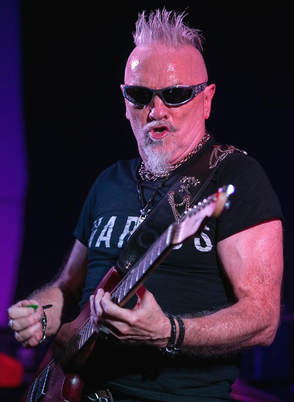 /sin'dogs/ pack leader Zal Cleminson
One of Scotland’s greatest rock and roll sons and forever associated with the Sensational Alex Harvey Band (and later, shorter stint with Nazareth), Zal Cleminson recently reappeared on the rock and roll radar (after a ten year hiatus from music) in the most bristling of rock metal forms with new band /Sin’Dogs/, 2017's self-titled EP and now debut studio album, Vol 1.

The sheer weight and intensity of the /Sin’Dogs/ however is truly heard – make that felt – in the live environment; something that caught out those in the audience not familiar with the new material or who were expecting (or hoping for) a collection of SAHB numbers and a sway-a-long to 'Hearts Grown Cold' (the highly impacting ballad Zal Cleminson wrote for, and while with, Nazareth).

Not only are the /Sin’Dogs/ a very different beast from anything Zal Cleminson has done before (ranging from his progressive rock days with Tear Gas to recording and touring with Elkie Brooks) the band’s contemporary, guitar-led rock-metal is so heavyweight their amps don’t go up to 11, they start at 11.
That wall of sound was in evidence right from opening (and brand new) number 'Pray to the Darkness,' featuring a vocal from Cleminson that was one sound board slider shift away from full distortion.

But while the /Sin’Dogs/ howl with sonic vibrancy there is far more subtlety within their rock-metal framework than may be first perceived or appreciated.
​
Bassist Nelson McFarlane and drummer Scott Cowie (who was playing his last gig with the band) provided a rock solid foundation upon which Zal Cleminson delivered his super-heavyweight, but far from one dimensional, songs, accompanied by William McGonagle on guitars (no slouch on firing off a tasty lead break himself) and the textures and atmospheres created by keyboardist David Cowan (the latter traits featuring strongly on the other new song performed, 'Devil’s Dream' and EP number 'Hungry Heart,' which mixes rock, metal and soundtrack). 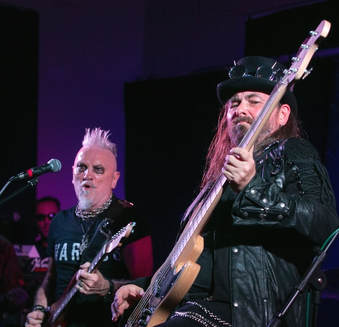 Three sinning dogs swing... David Cowan (background), Zal Cleminson, Nelson McFarlane
Vol 1 highlights included 'Evolution Road' (a heavy metal thumbs up for Darwinists) and 'Guns of God.'
The latter featured some suitably fiery lead work from Zal Cleminson and spat both musical and vocal venom (a guitarist first and a singer a distant second, Cleminson’s harsh vocals however fit the /Sin'Dogs/ material down to the earthy and forthright lyrical ground).

Album cuts 'Euphoria' and 'Stick Man' (which, title fittingly, benefited from big, crisp beats from Scott Cowie) also got an airing.
Weighty without ever being stand-out tracks on the album, live both absolutely rocked – to the point of damn near shaking the upstairs Sessions room of the Troon Concert Hall right down and on to the adjacent beach.

For those still hoping for a SAHB song or two, Zal Cleminson obliged by way of fully sin’dog’d takes
of 'Isobel Goudie' (the theatrical style and slightly unsettling mood of the song is perfect for this band) and 'Faith Healer,' which closed out the seventy minute set in full "Let me put my hands on you!" crescendo, all five /sin'dogs/ unleashed.

However those looking for any 'play the hits' shenanigans or expecting any dance-stepping choreography were very much at the wrong gig
and put firmly in their place – the cheeky shout for 'Delilah' was met by Zal Cleminson’s matter of fact "Eh… no." followed by the far more forthright
"Fuck. Right. Off."

But then that retort might well sum up the /Sin’Dogs/ musical modus operandi as well as any of their songs.

The /Sin’Dogs/ and their pack leader (with a darker eyed stage persona than the white-faced mime clown of SAHB 40 years prior) make for a howlingly good band.

And, as confirmed at Troon, a bloody loud one.


Zal Cleminson's /Sin'Dogs/ will return to Troon in November to play the 2018 WinterStorm Rock Weekender.