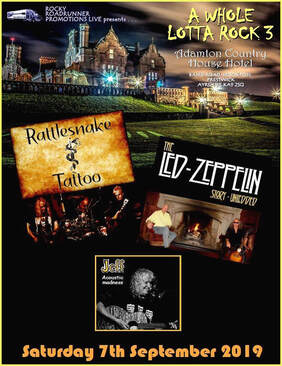 But for all the political un-correctness (the rapid-fire jibes at the expense of The Donald and Blond Boris were both numerous and deserved) Jeff Jeffrey still achieved his primary goal – to deliver a fun little acoustic covers set that warmed up the audience that had turned out for an intimate, unledded Zep showcase and an introducing new material set from Rattlesnake Tattoo.

Said audience also go to warm up their vocal chords on the sing-a-long to 'Delilah' (based on the SAHB version, natch; Jeff Jeffrey has such a strong Scottish vocality/ delivery that Alex Harvey is an obvious comparison).

Jeff Jeffery’s quirkiness in vocality also allowed him to deliver favourable takes of the likes of Bowie’s 'Space Oddity' and Bolan’s 'Get It On' but we shouldn’t forget that, in among the too-many-to-mention sessions with many a Scottish artist, hides an underrated songwriter – the self-penned 'Those Eyes' was a particularly nice addition to the set, albeit on hastily plugged in electric, having broken a string on his acoustic as he hit the first chord ("I just broke my G string!"… cue another two minutes of off-the-cuff banter). 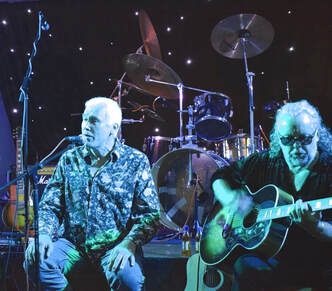 Pow as Robert Plant, and Nimmo as Jimmy Page, have got themselves an intimate but highly engaging piece of the Custard Pie (yep; they did that one; not many they can’t take on).
More importantly, they are exceptionally good at it.

Their strengths, other than having one of the greatest ever rock catalogues to pick from, is their skills with their chosen instruments.
​
Jack Nimmo’s six-string abilities, from nifty finger picking to big power chords (and a thickening of the sound via flanger and similar effects) means he can play the part of an acoustic Page confidentially and comfortably, but there’s no question the ear-catching double-take comes from hearing Alex Pow’s instrument – his voice.

Alex Pow has a timbre and tonality so close to Robert Plant you’d be forgiven for thinking it’s a recorded lift from Plant recordings of the early to late 70s Led Zeppelin; the results are a voice that can take on and deliver anything and everything from 'Ramble On,' 'Tangerine' and 'Four Sticks' to 'Houses of the Holy,' 'Kashmir' and 'Rock and Roll.'

A number of the songs were segued with medley snippets of other Zeppelin numbers or, as within the breakdown of 'Whole Lotta Love,' interjections of non Zep tunes (something Page & Plant employed in their mid-90s performances); in this Unledded instance 'Hey Joe' and a snippet of 'The Hunter'.
It was a clever change-up trick and one that worked extremely well, meaning Messrs Pow and Nimmo's Unledded sets are as good as anyone else’s Premium performances. 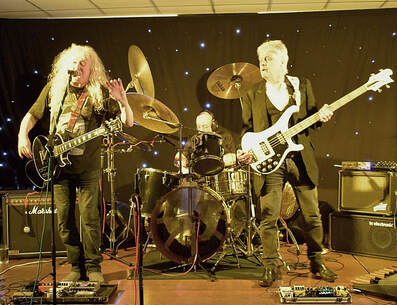 New Rattlesnake rock from Jeff Jeffrey, Dave Watson and Ronnie Garrity
Rattlesnake Tattoo have come a long way from their support set at A Whole Lotta Rock 2 back in February    when they opened a three band event that featured Lizzy rockin’ headliner’s Brian Downey’s Alive And Dangerous.

With Dave Watson now firmly back in the drum stool saddle (prior to his first gig with Rattlesnake Tattoo he hadn’t played for a couple of years) the trio – Watson, Jeff Jeffrey and sinewy styled bassist Ronnie Garrity (Henry Gorman Band, Eric Bell, Joe Elliot's Down 'n' Outz, The Heavy Metal Kids) – have since got a clutch of live shows under their belts and are now a tight and tidy band who have moved, in only six months, from being an effective rock covers trio to a fully fleshed out, all-new material rock-blues outfit with theatrical and progressive traits.

The reason for those unusual in blues rock traits were showcased on the night via close to an album’s worth of new material, most of which are musically shifting, lyrical scene setters that tell tales and stories of the West of Scotland and earlier Scottish history, given theatrical weight by Jeff Jeffrey’s vocal style (and some weighty six-string work).

That vocal and the band’s theatrical-prog leanings were to the fore on the intentional SAHB homage 'Anthony (the Bigamist)' and 'When Buffalo Bill Came to Glasgow,' the latter sitting atop Dave Watson’s tribal drum pattern. In short, Rattlesnake Tattoo are power-trio rock-blues in SAHB clothing.

​​Other notable, new numbers included the darker 'Don’t Talk to Strangers' (based on the infamous and never  identified serial killer Bible John), 'Blockade Runners' (telling the tale of the Clyde shipbuilding industry’s part in the American Civil War), the warrior-rock cry of 'The Celts Are Coming' and a change of atmospheric pace by way of 'Mother Earth,' featuring Ronnie Garrity on acoustic guitar (Garrity also strapped on an 8-String bass for another song, adding to the Rattlesnake instrumentation and song diversity).

Having showcased the new material (the first time it had been aired fully in front of an audience), from which a studio EP will shortly appear, Rattlesnake Tattoo closed out their set with a handful of rock covers including SAHB’s 'Midnight Moses,' Rory Gallagher’s 'Shadowplay' and Joe Walsh’s big-riffed power chord classic, 'Rocky Mountain Way.'

If there is to be a Whole Lotta Rock 4 it may well have to move from Adamton Country House Hotel to a more centrally located venue in South Ayrshire (that said the Cellar Room as used this time around lends itself perfectly, in size and acoustics, for more intimate, "Introducing" or singer-songwriter styled shows) but Whole Lotta Rock 3 was a whole lotta acoustically covered, superbly unledded and Rattlesnake rockin’ fun.