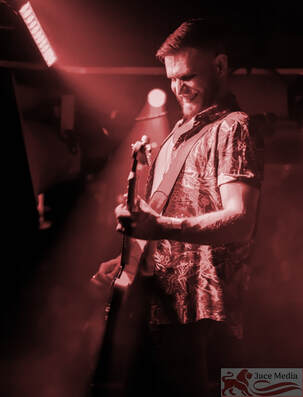 FabricationsHQ’s review of Ben Poole’s Trio /// Live ’19 album, released at the end of January, stated that "there’s an ongoing argument that Ben Poole, primarily because of his huskier and at times softer singing style and predilection for dipping in to soulful pop blues, doesn’t carry the same weight as many of his blues rock contemporaries."

Trio /// Live ’19 and this reviewer beg to differ.
​
Indeed the live album pretty much puts that "not weighty enough" notion to bed once and for all, as did Ben Poole and his band in quite emphatic style at the relatively new basement club venue Room 2 on a chilly and blustery February night in Glasgow.

The gig, slap bang in the middle of the Celtic Connections festivities (best of luck finding a music venue in and around Glasgow that didn’t have some band or other playing) was near the top of a run of UK dates supporting and promoting the live album.

The dates also provided an opportunity for Ben Poole to showcase his exemplary yet still under-appreciated (in the UK) six-string credentials in the company of his latest rhythmic partnership, the tight and tidy pairing of bassist Steve Amadeo and drummer Martin Deering (while Amadeo features on the live album Deering had stepped in for the initial run of 2020 dates due to the unavailability of Wayne Proctor). 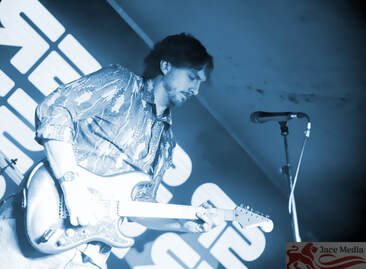 "Big Fraser" McKain of the blues hued Full Fat.
At Glasgow’s Room 2 it was actually a double trio showing, with Scottish three-piece Full Fat delivering a concise but multi-faceted 35 minute set that went down extremely well with the crowd (but then Aberdeen’s Full Fat are no strangers to Glasgow, having played a well-received show or three there in the recent past).

Fronted by the two Frasers – "Big Fraser" McKain (lead vocals, guitar) and "Wee Fraser" Urquhart (bass, backing vocals) – and with a solid sound locked down by drummer Simon Rattray, Full Fat are a band that’s nigh on impossible to pigeonhole (which, no doubt, musically satisfies them no end).

From uber-funky opener 'Maybe Break Up' to closing and best known track, the slightly ZZ Top-ified 'Temper Temper,' Full Fat displayed a blues hue at all times but one that constantly changed colour, from rockabilly tinged 'Dr. Longhair' and their cover of John Lee Hooker’s 'Boom Boom' to the dialled down and slower 'Come Break My Heart' (but even it diversifies from your standard blues norm, what with Fraser McKain’s Elvis Presley-styled vocal and intermittent wolf howls).

In summary, this was another strong outing from one of Scotland’s most individualistic rock/ blues bands.  ​

​On the night Ben Poole, Steve Amadeo and Martin Deering were not for mucking about – those weightier tones, as showcased on Live /// ’19, were immediately to the fore via the dirty big riff-motif that set up opening number 'Take it No More.' 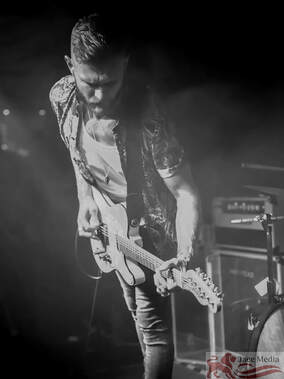 Ben Poole - serious muscle (and guitar) tone.
The latter also featured a seriously muscly solo from Ben Poole before the band hit their stride, and groove, on shuffle number 'Win You Over.'

Messrs Amadeo and Deering also played their parts to the full.
Steve Amadeo is not just a good bass player, he’s a very good bass player; one that brings a nice fat sound to proceedings yet never oversteps the musical mark of what a song needs (an art in itself).
​
Martin’s Deering's relatively under-stated style (albeit with a razor sharp, on-point snare beat that’s become such a part of the Ben Poole sound) was the perfect rhythmic complement, although he also produced a flourishing fill or three as a given song warranted or when Ben Poole raised the tempo of his own playing, primarily on his favoured Telecaster of choice.

But it wasn't all six-string Tele textures; Ben Poole also pulled out his Les Paul for those bigger solo moments, none more so than on Poole’s superb interpretation of the Freddie King classic 'Have You Ever Loved a Woman.'

In Glasgow, I’m delighted to be able to report, a genuinely vociferous crowd were so respectful during the number that you would indeed have heard that pin drop during the "pick-ups off" part of the opening solo
(it should also be noted that Ben Poole’s off-mic vocal was as inspired as his on-mic deliveries).
Poole’s mid-song solo was so heightened and heated it damn near blistered the paint off the Room 2 walls.

Another non-original winner was Jude Cole's 'Start the Car,' a song that’s a great fit for Ben Poole and the excellent Anytime You Need Me album, where the studio version resides.

Final song, an extended take of the funky 'n' chunky 'Anytime You Need Me' (featuring an equally funky bass solo from Steve Amadeo) brought to close a precise ninety minutes and done by 10pm set (ah, the old live curfew to allow set up for a nightclub routine) that was by far the best Glasgow showing yet seen and heard from Ben Poole and his band.

To repeat from FabricationsHQ’s review of Trio /// Live ‘19... Ben Poole, not weighty enough?
Do me a favour. The man’s got more muscle than Popeye after a tin of spinach.