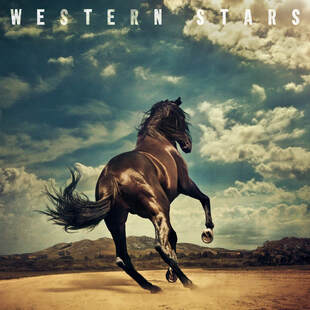 Music writers/ reviewers are a touchy bunch (guilty as charged); we don’t like to think of anything we wax lyrical about falling on deaf ears (or rather uninterested eyes). But there are moments of review-redundancy, where you accept that writing anything on a given artist or album is simply not required or an unnecessary exercise.

Bruce Springsteen is one such case in keyboard written ball-point.

Given his legend in his own lifetime achievement awards status The Boss is assured of global success and almost mandatory No. 1 chart positions for any new studio album, no matter what the critics say or write (2009’s Working on a Dream shifted more than three million copies worldwide but received incredibly wide-ranging review appraisal from excellent to decidedly iffy).

Western Stars shouldn’t be (and isn’t) any different in review-redundancy terms but this is a new/ previously unheard Bruce Springsteen musically and, on a few of the numbers, vocally (lyrically, it's a welcome return to the character-driven every man story telling Springsteen absolutely excels at).

It’s also an album so cinematic in scope (with beautifully scored orchestral arrangements) and songwriting influenced by late 60s to early 70s California pop (the Glen Campbell/ Jimmy Webb and Burt Bacharach country crossover and crooner-pop models, not the Beach Boys) you are almost duty bound to write about what is, frankly, a 13 song soundtrack to the greatest American West road movie never yet made (although the hinted at "Recording Of" documentary will surely become a reality).

The first line of understated opener 'Hitch Hikin'' ("Thumb stuck out as I go, I’m just travelling up the road") sets the story-telling tone of Western Stars before the orchestration adds cinematic sweep and atmosphere.

Following number 'The Wayfarer' is the first of many songs that do indeed sound as if they have been lifted from the Californian pop songbook of the 70s (finger clickin’ rhythm and punctuated orchestration) but it’s others such as 'Tucson Train' where you can almost hear Glen Campbell’s rich crossover crooning voice replacing Springsteen’s dustier Heartland deliveries.
It’s also interesting to note the rhythmic cadence of 'Hello Sunshine,' a song that could be a homage to the John Hartford penned and Campbell sung classic, 'Gentle On My Mind.'

Similarly 'Sundown' might well be the best song the late and lamented Mr Campbell never sang and the best song that Jimmy Webb never wrote.
'Sundown' also features a mighty fine vocal from Bruce Springsteen, as does 'There Goes My Miracle,' where The Boss gives it some big voiced croon and a couple of lovely note lifts.

The title track is a beautifully scored number for the cowboy in his twilight years although, like another reflective number, 'Drive Fast (the Stuntman),' the characters of the songs clearly lived their working lives in the movie world.
That trademark Springsteen balladeering weaves through the Western Stars tapestry (there are half-a-dozen on offer including vignette piece 'Somewhere North of Nashville') but there’s a jaunty change of pace over at 'Sleepy Joe’s Café,' which sounds like a great place to go given the Cajun and country-swing band that play there.

Complemented by a beautiful sounding production from Ron Aniello (who co-produced on Springsteen’s two previous studio albums, Wrecking Ball and High Hopes) Western Stars is Bruce Springsteen as you have never heard him before and coming of, and acting (other older rock stars take note), his 70 years young in September age.

The greater compliment?
You would never previously have thought to compare Bruce Springsteen to the likes of the aforementioned Campbell, Webb or Bacharach.