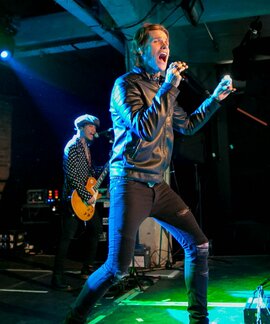 Buckcherry's Josh Todd vocally revels in the best sound of the night
What does a rock music fan do on a cold, mid-week February night in Glasgow?

Well, if you notice that not one but three American bands are playing at the new-ish SWG3 venue which sits next to the Clydeside Expressway and doesn’t charge an arm and a leg for tickets (unlike the two more notable venues on the other side of the Expressway) the choice is clearly made.
​And for £25 you can’t go wrong, right?

Unfortunately it was both an early (6.30pm kick off) and unpromising start from opening four-piece Adelita’s Way.

This wasn’t down to the band or their material, however, but rather the frankly appalling sound – the PA audio was unbelievably bad and consisted of extremely loud kick drum, snare drum and vocals, rendering both guitar and bass down to almost inaudible levels.

Adelita’s Way are a quintessential vocal-guitar-bass-drums rock band and the guitar should have been snarling rather than whimpering in the corner. Your reviewer actually enquired at the sound desk as to where the guitar was (in not so many words), resulting in two Americans staring back blankly and looking either guilty or unable to work out the accent (probably both).

What was heard of Adelita’s Way was a set of songs that places them in the poppier end of rock (think Nickelback territory) and, considering they are now on their fifth album and been going for some thirteen years, a band that deserved a lot more respect from the sound techs.
The small, still early in the evening crowd at SWG3 thankfully gave them a more respectful reception.

Adelita's Way didn't get the sound they deserved, but deserved their respectful audience reception 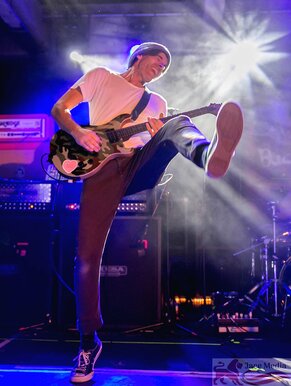 Hoobastank's Dan Estrin kicks out another razor sharp riff
Next up were Hoobastank and suddenly the guitar was far more audible, which was about as surprising as Prince Philip not being prosecuted for dangerous driving (I really don’t understand this unwritten hierarchy of sound quality when support bands are involved; it does nothing but cheat the paying public).

Hoobastank’s sound was certainly better than the openers, but still not perfect – singer Doug Robb’s vocal, for example, didn’t sit at the top of the mix as it should have.

The front man quickly got the crowd on his side but it's guitarist Dan Estrin who holds the ace card for Hoobastank.

Estrin’s razor sharp riffs on a string of PRS guitars through Mesa Boogie half stacks cut through the opening salvo of 'Pieces,' 'Crawling in the Dark' and 'Remember Me.'
All three numbers served up full helpings of rock with a side order of grunge and stadium anthems.

Hoobastank has been going since 1994, released seven albums, toured the world and sold ten million albums.
So you might ask "why were they a support band?"
The answer may be time, circumstance and / or material.
The band have the stagecraft and when they hit the mark they certainly have the songs, but maybe it’s simply that the early part of the noughties was their time (nor can every
act or artist convert to being a household name).

Hoobastank entertained the Glasgow crowd with a set that included songs from throughout their career, up to and including 2018 album Push Pull, but the song which went down particularly well was, unsurprisingly, their biggest success 'The Reason,' which included an impromptu
singalong from the increasingly vocal locals.

This was a performance worthy of a headline spot but for Hoobastank it may be a case of woulda, coulda, shoulda. 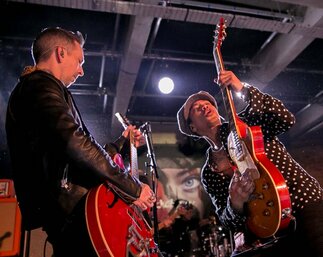 The Buckcherry red guitars of Kevin Roentgen and Stevie D
Headliners Buckcherry came on to a rapturous reception and a filled-out crowd. Unsurprisingly the sound improved again (and lighting increased), the visceral twin guitar attack of Stevie D and Kevin Roentgen meshing in the mix with the vocals of charismatic (and heavily tattooed) front man Josh Todd.

Sett wise the band majored on soon-to be released album Warpaint.
Opener 'Head Like a Hole' (a Nine Inch Nails cover) set the template for the evening with 'Broken Glass,' 'Out of Line' and 'Too Drunk' emerging as further set highlights.
The closer was, predictably, the band’s best known song 'Crazy Bitch.'

Buckcherry went down well, pogo’d at all the right places and came over as an American AC/DC with a bit of latter-day ‘Faces’ chutzpah but while they, like many bands, have a certain "bad ass" sound and style it was just a bit too samey and formulaic.
​
Buckcherry are very good at what they do and have a loyal fan base unconcerned at any lack of variation; but on the night there just weren’t enough dynamics or thought evident in the way those traits are achieved by other bands – such as Hoobastank.

As regards the venue, the SWG3 is now inheriting a number of gigs which would have been held at the sadly lamented city centre venue, the 02 ABC, victim of recent and extensive fire damage; the to-be-demolished upshot is a dearth of venues in Glasgow with circa 1000 to 1500 capacity.
​
SWG3 tries hard but doesn’t have the charm of the 02 ABC or as impressive a stage area – it's basically a converted warehouse with some very obtrusive pillars, which interrupt the sight line of a fair few punters (the placing of the disabled viewpoint could do with a pillar related revamp).

All in all this triple bill was a reasonable but not top-drawer gig – sound value for sure, but with sound issues.
And, in Hoobastank, a band that stole the night from the headliners.

Save the Glasgow 02 ABC Petition: www.change.org/p/glasgow-city-council-save-the-o2-abc