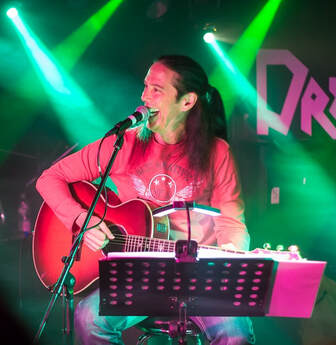 It's smiles better at the DreadnoughtRock with Danny Vaughn
Given his many sightings and appearances at the DreadnoughtRock (primarily with hard melodic rock trio The King Lot) Scottish singer and rather handy songwriter Jason Sweeny could be seen and  heard as something of a resident at the famous music venue.

While The King Lot have, across the last few years and two studio albums, been Jason Sweeney’s primary vocal and bass playing platform an upcoming band hiatus means more time for his other musical love, that of the more intimate acoustic setting.
Such a forty-five minute set at the DreadnoughtRock was the perfect support partner to Danny Vaughn’s featured Solo Acoustic performance.

Jason Sweeney’s headier material, certainly vocally (Sweeney isn’t a good singer, he’s an exceptionally good singer) has a home within The King Lot but his heart lies in melodic and modern country, evident
from the get-go on opening number 'Without Love' (with a fuller sound and a Nashville arrangement it's the sort of song that wouldn’t be out of place on the Billboard Country charts). 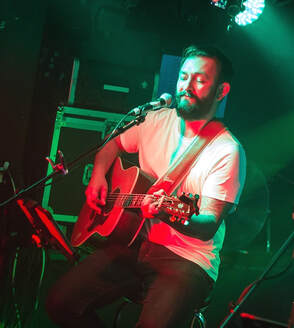 Jason Sweeney; a 'king lot more country than you might think
​Following numbers, the particularly notable 'Love by the Hour' and 'Love Hurts' led to thoughts of a four letter word theme emerging, but a cover of 'Here I Go Again' (guaranteeing a full voiced ‘Nought sing-a-long in an otherwise unknown set of all-new material) along with other new songs such as the more robust and Bryan Adams-ish 'Drinking for the Weekend' and the personal themed 'I Run the Line' put paid to any such Book of Love (songs) concerns.

The aforementioned 'I Run the Line' and final number 'Watch This Grow' were set highlights with the latter, as confirmed by Jason Sweeney, the first song he will record if he goes ahead with his idea of releasing an acoustic EP before the end of the year.
​
On this showing, it would be a country influenced shame if he doesn’t.

​​While he got one, leading to a thunderous welcoming applause from a sold out DreadnoughtRock, Danny Vaughn certainly doesn’t need any introduction to rock fans.

The voice of American hard melodic rock outfit Tyketto, Danny Vaughn has also made a vocal and songwriting mark via a clutch of VAUGHN and solo releases (including latest, across the years collection Myths, Legends & Lies) and a number of other band projects such as his pre-Tyketto stint as front man with British based rock band Waysted, featuring Pete Way.

That all the above featured in some musical shape or anecdotal form (just about every song included a story or introduction; Danny Vaughn is as comfortable as a raconteur as he is a singer) is a testament to the across the boards quality of Vaughn’s previous and present work.
As significantly, much of the singer’s solo material matches the Tyketto big hitters – early set highlights such as the countrified 'Last Ride of the Sunset Men' (with darker, spoken passage) from Myths, Legends & Lies and the higher voiced 'Haunted' from VAUGHN album Fearless being two cases in high quality point. 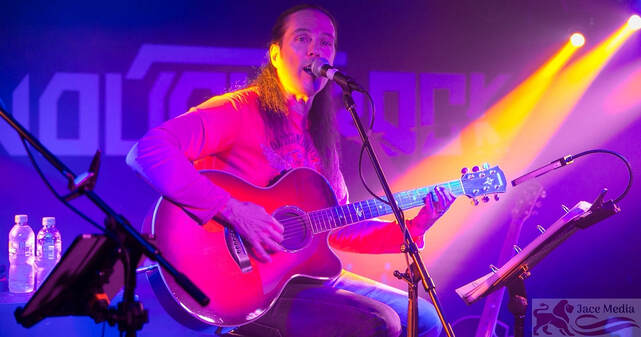 Danny Vaughn, in the pink and on fine Solo Acoustic form for his first ever appearance at the DreadnoughtRock 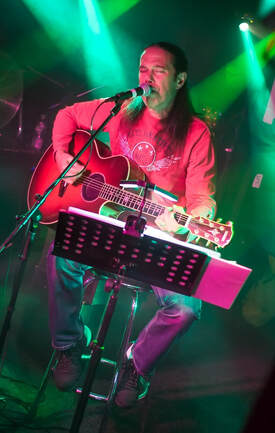 With such a large, welcoming crowd and Danny Vaughn both comfortable and very much at home in the DreadnoughtRock environment, the set soon left the scripted far behind and headed straight to "let’s try this one" / winging it territory, with Vaughn pulling out both deeper cuts (lovely little reflective number 'Remember When' from his Standing Alone EP) and the decidedly quirky, in the shape of 'I Wanna Get to Know You,' the hidden track from first VAUGHN/ solo album Soldiers & Sailors on Riverside.
Give it everything (in more ways than one) number 'Is That All There Is?' from Soldiers & Sailors... also got a well-received airing.

A blast from Danny Vaughn’s past came by way of the Vaughn written 'Black and Blue' from his Waysted days (leading to the quip "It's interesting Pete Way thinks he wrote the lyrics to this... I know for a fact he has trouble writing") before Tyketto order was restored through 'Here’s Hoping it Hurts' (when forgive and forget just isn’t an option) and the band's acoustic number 'The Last Sunset.'

It was no surprise that ballad 'Standing Alone,' the Tyketto song that has travelled further and touched more fans than any other, featured, with a strong and heartfelt vocal from a singer who is still in fine, rangy voice.
This time around however it was followed, somewhat disconcertingly, by glass shattering squeals of sonically high-pitched delight at song’s end from one right up front fan (leading to Danny Vaughn’s genuinely startled "she just went to a register I’ve never heard before!")

'Standing Alone' was also the main set closer, followed by an "encore" and return to the stage of Jason Sweeney to accompany in harmony, and share lead vocals with, Danny Vaughn on 'Kelly’s Gone' and Tyketto’s ear-wormery classic 'Wings' (Danny Vaughn is also quite the mimic; Sweeney’s delay in reaching the stage was noted by Vaughn who reacted with, in perfect Sweeney "he’s busy takin’ a self-ee!").

Or rather that all should have been the set closing finale, but with the crowd so into the show (other than the contingent at the bar at the back who talked so loudly it could be heard right up front; 'cheers,' boys) and Danny Vaughn having the time of his Dreadnought rocking life, he kept going – for another half hour.

Extended show highlights included 'In the Shadow of King John' (a Guinness raised high, Celtic folk rockin’ nod to Danny Vaughn's Irish roots and time spent in the Emerald Isle), traditional Scots-Irish folk song 'Wild Mountain Thyme' (performed in memory of his mother, who passed in December of last year), the emotive 'Seven Bells' (a sea faring song influenced by a visit to Liverpool Cathedral) and a funkily acoustic take of Tyketto's 'Lay Your Body Down.'

It was an unexpected but highly appreciated extension to a fine, fine set from a man who will almost certainly return (bar leaners and talkers need not apply), probably in the company of his buddy (and lover of the DreadnoughtRock) Dan Reed, when Messrs Vaughn & Reed return to Snake Oil and Harmony touring next year on the back of a forthcoming album.