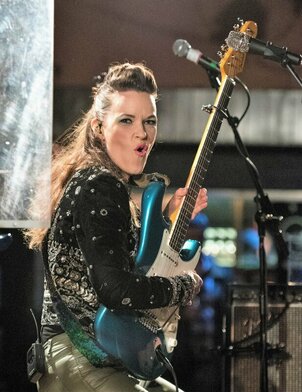 There was an interesting juxta-positional charm to attending a rock gig on a sunny, Scottish Sunday afternoon in Kinross-shire.

Finnish blues guitar songstress Erja Lyytinen’s current UK and European tour in promotion of new album Another World (released in April, click here for FabricationsHQ's review) took her north of the border to, first, Glasgow (for a more typical city centre Saturday slide guitar and melodically rocking blues night at a well-attended Nice N Sleazy) before heading the next day for a matinee performance at Backstage at the Green, the intimate and friendly live music room that sits at the back of the Green Hotel in the lovely town of Kinross.

The early kick off was also the instigator to the first humorous quip of the day (of which there were many, Miss Lyytinen is as funny and engaging as she is a gifted guitarist and now stronger singer, having grown in vocal stature since her appearances on the Finnish TV music show Stars Stars).

Having walked on stage with her highly talented band, ex Von Hertzen Brothers keyboardist Juha Kuoppala, bassist Tatu Back and drummer Iiro Laitinen (if he had been on guitar and not behind the kit you’d have sworn it was Johnny Depp) she made the point about how strange it was to be playing an afternoon show only to immediately follow up, quite unintentionally but automatically, with "how are you all doing this evening!"

The answer to that was very well indeed thank you very much, courtesy of enjoying an excellent and well-honed set from Lyytinen and her band, which put the focus squarely on Another World.

Given Erja Lyytinen’s earlier back catalogue, a mix of well-crafted soul-pop, jump and slide blues, showcasing an as yet unreleased melodic blue srock album could be seen and heard as a brave decision but Erja Lyytinen continues to grow and expand as a songwriter, player and artist – 2015’s Live in London superbly documents the end of one musical chapter while last offering, Stolen Hearts, coupled with Another World, clearly heralds the start and continuation of another, one that encompasses all of Lyttinen’s songwriting and storytelling traits.

Those multi-styled traits were underlined by the set’s opening two numbers, both from Stolen Hearts – the melodic shuffle 'Lover’s Novels' (built upon a seriously funky five-string bass groove, interjected with some cool keyboard splashes and even cooler slide remarks) and the seven minute, Deep Purple meets melodic progressive blues of 'Black Ocean.'

As strong and musically stretching as 'Black Ocean' is, following number 'Cherry Overdrive', from Another World, is its six-minute, souped-up, car driving superior; it builds from bluesy, almost psychedelic lower gears to a dreamy, freeway cruising section, complete with expressive and beautifully melodic guitar solo.

The mixing and matching of Another World and Stolen Hearts material continued, respectively, with the first official live outing for the slide-fest boogie of 'Wedding Day' and the dark, you-hurt-me blues of 'Slowly Burning.'
The latter emphatically proved that the girl from Helsinki can still play the pained blues as well as she can melodically rock (her song closing, off-mic A cappella vocals were an impassioned outlet for the personal pain depicted across the lyric and a sign of that new found Stars Stars confidence).

Penultimate set number, the semi ad-libbed 'Delta Blues Mix,' allowed Erja Lyytinen to show why she has been dubbed "Queen of the Slide" as she impressively mimicked the style of a number of blues greats (Muddy Waters, Son House, Robert Johnson).

Set closer, the slide rockin’ (natch) 'Rocking Chair' was extended to feature crowd participation (how many shows can you go to where you can be part of an audience that gets to count in a song in Finnish – and for a count of seven at that) and an intense yet enthralling, never took his foot of the percussive gas, jazz-swing meets rock drum solo from Iiro Laitinen.

If the "good evening" line brought the first smiles of the Backstage day the last was provided by the band coming off stage and shutting the door to the adjacent annex room behind them while awaiting the applause and shouts for an encore.
Which would all have been fine if not for the fact the door was a Fire Door and had to be opened from the music room side by a discerning individual who had recognised the locked door dilemma.

Cue the return of an embarrassed but still laughing quartet for encore cover number 'People Get Ready,' a perfect choice for a seated (but very vocal and highly appreciative) Sunday afternoon audience.

Ladies and gentlemen, Erja Lyytinen – a smile on her face, a slide in her hand, on top of her performance game and on top of Another melodically rocking, blues infused World.