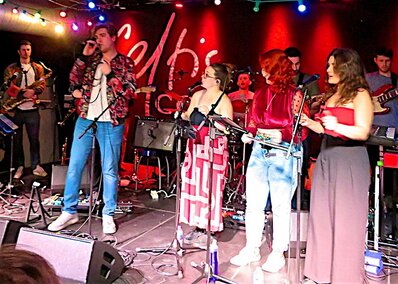 Fat Suit were appearing at the Drygate venue in Glasgow as part of the Celtic Connections festival; it was also a perfect showcase to promote latest album Waifs & Strays, which was give Feature Review status by FabricationsHQ on its release.

Fat Suit describe themselves as follows, and this was writ large at the sell-out gig in Drygate: "Fat Suit take influence from the sounds of the Brownswood recordings, the UK underground jazz scene, and the broad soundscapes of Scottish folk. Within the collective are multi-disciplined musicians of jazz, folk, rock, and electronic worlds."

Although this was effectively a home gig, the band went for a novel approach in their Celtic Connections guise.
The band eschewed the more predictable songs from the latest album plus a selection from previous releases format to present, in a support form, "a specially-curated selection of emerging Scottish singer/songwriters including Zoe Graham, Kitti, Angus Munro, Tim Kwant (Tounges) and Beth Malcom."

The first half of the gig comprised the aforementioned performing with Fat Suit as their band; this worked very well indeed and helped showcase said talent.

All the performers were very accomplished with the highlights being Kitti evoking memories of Amy Winehouse and the ridiculously talented Angus Munro, who has previously collaborated with Fat Suit.
Whilst this is not a review of an Angus Munro gig, do yourself a favour and go and see / hear one of the best voices on the Scottish music scene.

The final number of the first set, 'Religion' by Tim Kwant, also merits mention for the passionate delivery and being a definitive ear-worm.

The majority of Waifs & Strays was played and each player got an opportunity to stretch out at one point. Opening number ‘Rumblings’ came over as a far more muscular number than the album version and is a great example of the growing maturity and confidence of the band.
The horn section was on point from the off and the wall of sound that the help to reproduce is impressive in the live setting.

The second number on the album, 'Keo,' also benefited from its live outing; the main riff conjured up 70s cop show themes via, dare I say it, Snarky Puppy. 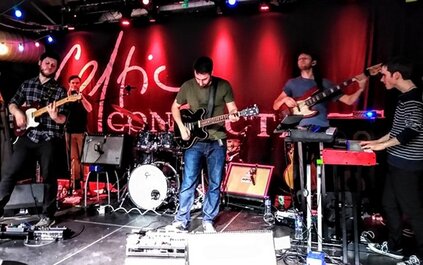 ​​In fact let’s address the elephant in the room – the very nature of Fat Suit and their flexible line-up sizes will inevitably draw comparisons with Snarky Puppy (they are clearly an influence) this is increasingly a band in its own right.
For example there is little or no Celtic/ trad. influence in Snarky Puppy but those traits bubble under the surface of the Fat Suit compositions.

'Keo' also included a stellar sax solo; it then returned to the opening riff with precision and feeling after a feature spot for Mark Scobbie on drums.

Band leader and guitarist Dorian Cloudsley jokingly introduced mid-set number 'Countryside Quiet' as the one number for those expecting Celtic music rather than jazz-fusion.
Again, this number benefited from the live setting and the introduction of guest player and song composer Rachel Clemente on harp. This atmospheric number turned out to be one of the unexpected highlights.

A true highlight among many on Waifs and Strays, 'Mombasa,' written by bass player Gus Stirrat was up next. This song contains some great slabs of funk with another of those wall-of-sound horn sections and features a guitar solo in the breakdown section.
On the album the solo is provided by the stunning David Dunsmuir (currently guitarist with Billy Cobham, among others) but at the gig the unsung hero of the band, Fraser Jackson, provided the solo.
Jackson, a very tasteful guitarist who provides razor sharp rhythm work, excelled in this solo and others on the night.

'Brum doing a Wheelie' is prime, up-tempo Fat Suit with a memorable melody and featuring a top-notch solo by Alan Benzie on keys.
A few words here also for rhythm section Mark Scobbie and Gus Stirrat – rock solid yet inventive.

‘Caretaker' brought the tempo down with a reflective mood which then morphs into another funk monster riff led off by Gus Stirrat. The band are really on form here and, again, a top-notch live version (a live album would be a good fit for this Fat sounding Suit).
A stunning trumpet solo elevated the number further before the keyboard-led crescendo ending.

'Uh-oh' introduced a bit of salsa via Frank Zappa (if you can imagine that) before a couple of older Fat Suit favourites rounded off the set.
All in all, a great gig by a group of musicians of whom Scotland can be extremely proud.