Once Around the It Bites World
Francis Dunnery’s It Bites - St Luke’s, Glasgow, 16th January 2020 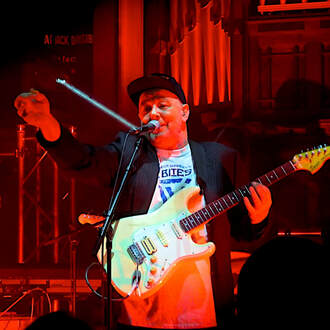 To the casual observer the career of Francis Dunnery began and ended with the 1986 It Bites single 'Calling all the Heroes.'

However, on the 16th January 2020 at the St Luke’s venue in Glasgow, there was a sold-out show celebrating the lengthy career of a master guitarist and multi-faceted songwriter.

Nor does it hurt that Francis Dunnery connects very well with a Glasgow audience with his earthy, Cumbrian between-song patter (additionally, Dunnery's dad was a Glaswegian).

For the uninitiated, It Bites have been previously described as having "a strong art-rock tendency" and "one of the more curious cases of the progressive rock world."

That curious case comes from the fact the band were, certainly initially, more of a melodic pop band, but a pop band doing what no pop band had the right to do – successfully mixing catchy tunes and hook choruses with highly complex musicianship within a distinctly progressive framework.

Since leaving the band in 1990 Francis Dunnery has had some success in the USA, a plethora of solo albums and a co-existence with the various post-Dunnery forms of It Bites (there was a very brief reunion of the original line up but it was destined to have zero longevity).

The St Lukes gig started with a triumvirate of 'Kiss Like Judas' ("so glad you could make it!"), 'Black December' and 'Yellow Christian' – all cornerstone staples of prime era It Bites.
The combination of these favourites, a stellar band and an augmented light show at the usually dimly lit venue including (ironically, given it was about the only It Bites classic not performed) being bathed All in Red, meant a rapturous reception from the Glasgow crowd.
That said with only four dates on this particular UK tour it was obvious from the accents in the bar that many a fan had travelled a fair distance to witness this gig.

Francis Dunnery then ramped up the good-natured banter with the crowd before launching into rarer It Bites number 'Staring at the Whitewash' and punchy 'n' funky 'Heroes' B-Side 'Strange But True,' both of which (like their predecessors) were delivered with serious gusto and panache.

Whilst Dunnery is an outstanding guitarist, singer and songwriter his supporting band are all very competent musicians, none more so than keyboard player Peter Jones.
Jones’ delivered sympathetic support to the songs along with flashes of dexterity and virtuosity as highlighted in his solo section, which was much appreciated by the audience (it’s also worth noting this was from someone with a visual impairment).

The intensity was raised with crowd pleaser 'Underneath Your Pillow' from the last Francis Dunnery fronted It Bites album Eat Me In St Louis (that 1989 album is a good starting point for those unaware of the output or quality of It Bites or Dunnery).
The live version as heard at St Luke’s did the song justice and then some, aided and abetted by the superior lighting and FX (a word at this point regarding the sound / mix, and that word is… exemplary; a pleasant change from some gigs).

There was the inevitable breather section in the show where Francis Dunnery highlighted some of his acoustic numbers, and the aforementioned keys solo, but at no point did the show flag, partly due to Dunnery’s connection with the crowd while wondering whether some of the audience might have noticed that he was less of hair but larger in size before pointing out the height of his "fame" was "thirty years ago," adding "look at the state of you lot!"
Touche, Mr Dunnery.

The closing section of the set included a very welcome surprise version of Zappa’s 'Black Napkins' that was, frankly, worth the entrance fee alone.
With the audience well on-side Dunnery guided the band to the finishing line with more crowd favourites including 'Midnight,' 'Still Too Young to Remember,' the progtastic 'Once Around the World' and, inevitably, a  stirring  'Calling all the Heroes.'

The results of which were everyone went home happy (albeit in hoarse voice) after a night of great music delivered in a good-humoured way by excellent musicians bolstered by great sound and lighting.
If only all gigs could be like this.