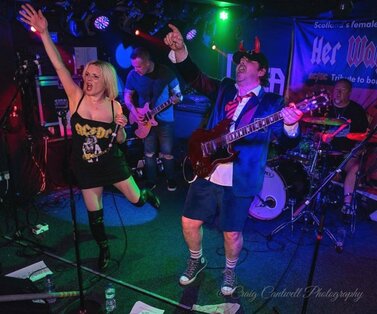 The "Oi!"s have it. Her Way to Hell brought their T.N.T. packed AC/DC tribute to the DreadnoughtRock in 2018 and again in 2019
List the rock bands with the most tribute acts associated with their name and Led Zeppelin, Thin Lizzy and AC/DC are going to show up in the Top 10, perhaps even Top 5, every sound-a-like day of the in homage to week.

With their legendary and greatest ever status in the annals of rock, the plethora of Led Zeppelin tributes is no surprise.
Nor Thin Lizzy, who boast a large number of tributes.
Lizzy are also a band who, like Zeppelin and AC/DC, through rock and roll life and death, could never again perform in their original form (the one-man-band link where the Black Star Riders become the boys who are back in town for a classic Lizzy number or ten is as tenuous as it gets).

Given the reverence in which AC/DC are held (another who sit at the greatest ever debate table) it's no surprise there are also a vast number of AC/DC tributes, but taking a slightly different angle from the more common all boys act with both Bon Scott and Brian Johnson eras covered are Scottish band Her Way to Hell.

As the name suggests, this particular AC/DC tribute deliver High Voltage AC/DC rock and roll from the original (and for many never bettered) Bon Scott era of the band, fronted by a female vocalist – the petit in physicality, but big in never standing still stage presence, Laura McFettridge.

​The Bonnie Scott of the tribute world gives the band a different vocal dynamic – one that provides vocal contrast and front woman foil to what is, in terms of instrumentation and delivery, a sound that's pretty close to the original, as was witnessed by a healthy sized, sing-and-air-guitar-a-long crowd at the DreadnoughtRock in Bathgate (the band were making a welcome return to the venue having played the famous Scottish rock club in 2018). 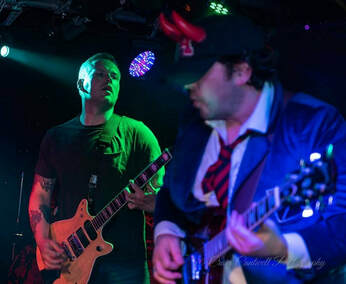 A Gibson SG will always be in the AC/DC foreground but Stephen Johnston puts Malcolm Young's contributions firmly in focus
While lead guitarist Derek Waters, fittingly attired in devil horned baseball cap and schoolboy outfit, delivered the classic Angus Young Gibson SG sound 'n' solos with some serious aplomb (he also has the 'dipping bird' move and one leg planted other leg rockin' mechanics down pat), Stephen Johnston is the unheralded champion of the band, having done his homework on Malcolm Young’s sound and set up (a bigger part of the classic AC/DC sound than the late and great rhythm guitarist was ever given credit for).

By contrast Laura McFettridge couldn’t be more unlike Bon Scott in physicality, vocality and, rather noticeably, gender, but it does provide for that interesting contrast mentioned earlier.

Highly animated (more bounce than Zebedee… in more ways than one, although the quip is for those that remember The Magic Roundabout – and let’s be honest that’s most of us) Laura McFettridge is not adverse to joining the crowd for a dance during the instrumental sections or when Derek/Angus goes off on one; she also has plenty of stage sass (think Lulu doing adult stand-up), to the degree that 'Live Wire' could have been written for her.

​Add to that an engine room of Craig Brennan (foot to the floor beats and a drummer who works the toms as much as the snare) and the pumping bass lines of Gerry McDade and you have a band who can produce the goods from BONa fide classics 'High Voltage,' 'If You Want Blood,' 'T.N.T.' and 'It’s a Long Way to the Top' (sans bagpipes sadly) through to the band call and crowd answer of 'Dirty Deeds (Done Dirt Cheap),' 'Let There Be Rock,' 'Problem Child' and 'Rock and Roll Damnation.'

But there was also room, across two one-hour sets, for deeper cuts including 'Love at First Feel' and 'Dog Eat Dog,' raucous renditions of 'Rocker' and 'Riff Raff' and a bluesy brace in the shape of a gritty 'Down Payment Blues' and the more spacious 'The Jack' (cue more crowd participation).

​And it wouldn't be an AC/DC show without the full band and crowd backed belt of 'Highway to Hell' and 'Whole Lotta Rosie,' two songs that, if not in an AC/DC tribute act's set, would see said act shown the backstage door quicker than you could say "42, 39, 56." 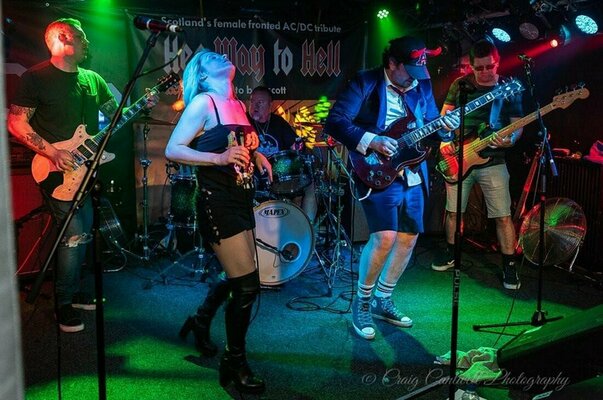 In summary, Her Way to Hell Ain’t a Bad Place to Be for any AC/DC fan looking for a High Voltage fix of the band’s original, legacy forming era – and BonFest 2019 won’t be a bad place to be for the band when they return to the festival to play Kirriemuir Town Hall as part of a three day event that celebrates the life of the Scottish born rock singer whose Bad Boy Boogie ended far too soon.

BonFest 2019 will take place in Kirriemuir over the weekend of May 3rd to 5th.
The event will feature more than thirty bands including headliners Back 'N' Black, BS/RS (Bon Scott Revival Show) and Live/Wire.
The Town Hall will also host a number of bands including Brainshake (Friday 3rd), Her Way to Hell (Saturday 4th) and Burnt Out Wreck (Sunday 5th).
https://www.bonfest.com/