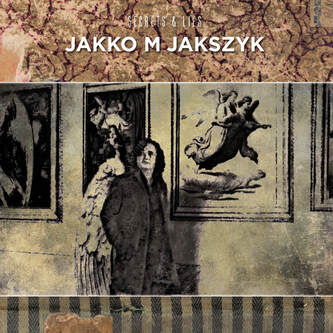 An accomplished guitarist, multi-instrumentalist, singer, songwriter, producer and actor, Jakszyk has been a member of a number of bands (including 64 Spoons and Level 42) and involved in many a collaboration.

Opener 'Before I Met You' sets the standard for the album’s extremely high songcraft and production values.
A rhythm section of Gavin Harrison and Mark King provide the impressive platform for a number lyrically inspired by novelist Julian Barnes’ 1982 black comedy about sexual jealousy.

It’s clear a great deal of thought has gone into every aspect of the cross-genre number (prog-rock meets commercial rock); the vocal lines and harmonies are particularly well-constructed while JJ’s lead guitar parts conjure up memories of some of the late Allan Holdsworth’s complex legato lines.
Featuring great vocals, melodies and lyrics, 'Before I Met You' is well-produced and brilliantly played.

Following number, 'The Trouble With Angels,' is a beautifully constructed ballad enhanced by Tony Levin’s sinewy, fretless bass parts and an outstanding, memorable chorus.
With a lyric partly influenced by the comforting words of a passing stranger, JJ turns in a great emotional vocal performance on a number that, should it have been a George Michael song in a different musical time and space, would be known and celebrated world-wide.

'Fools Mandate,' which carries an Arabic vibe, is a justified criticism of politicians’ failure to learn from mistakes of the past (it seems JJ co-wrote this as a contemplation of the Balfour declaration of 1917, which is generally considered a principal cause of the ongoing Israeli / Palestinian conflict).

As can be noted from the song content being described, these are not thrown together lyrics; they have real depth and include, one suspects, subject matter that is very personal and important to Jakko M Jakszyk.

'The Rotters Club Is Closing Down' is a moving tribute to JJ’s late friend, drummer Pip Pyle.
The song, another masterclass in vocal arrangement and production, carries an emotional vocal delivery that helps the ballad connect with the listener.

The King Crimson connection comes calling on 'Uncertain Times.'
One of three numbers that originated in KC writing sessions, the track is highly reminiscent of the legendary progressive ensemble though its use of dissonant chords, a repeating guitar figure and background strings/mellotron.
JJ revisits criticism of politicians within the lyrical theme of the song while also offering up another outstanding Holdsworthian solo.

'It Would All Make Sense,' one of the rockier and less contemplative numbers on the album, returns to the theme of relationship difficulties.
Another memorable chorus on the subject of betrayal, great guitar work and a wonderful performance by veteran John Giblin on bass make this yet another album highlight.
There are also echoes of Porcupine Tree in this number as well as some funk elements (another reference point, for the verse sections, is Thomas Dolby).
Another song that started life in KC sessions, the atmospheric 'Under Lock & Key' (co-written with Robert Fripp and featuring a complex drum part), manages to escape the King Crimson comparison by being far more reminiscent of Nik Kershaw, of all people. But then this is a very varied album (and all the better for it).

​Instrumental number 'Secrets, Lies & Stolen Memories' features JJ soloing over the top of an orchestral arrangement that rises, falls and rises again with some military style drumming during the crescendo.
It may be unexpected, but it’s an absolute winner.

Similarly unexpected is A capella number 'The Borders We Traded,' which showcases JJ’s vocals and production abilities. This is a lovingly constructed three-minute piece of vocal music.

Another wonderful didn’t-hear-that-coming moment (the album could have been entitled Secrets, Lies & Surprises) is the beautifully emotive Celtic instrumental 'Trading Borders;' this is a song that wouldn’t be out of place on an album by Scottish trad. / melodic folk band, Capercaillie.
The perfect on-repeat soundtrack for a journey through the north of Scotland (or any other scenic part of the world), 'Trading Borders' is another outstanding moment on an outstanding album.

Given what has gone before, the decidedly Crimson-esque closing number 'Separation' could be seen and heard as an anti-climax.
While many will hail it as the best song King Crimson never did it comes across more as King Crimson by Numbers, but the latter is part skewed be the originality, variation and excellence of the previous tracks.

Whichever way you approach, or hear, the progressively Kingly closing number, this is a highly engaging, masterful and all-encompassing work from Jakko M Jakszyk.

The secret is out, this is a contender for rock (prog or otherwise) album of the year.
And that’s no lie.