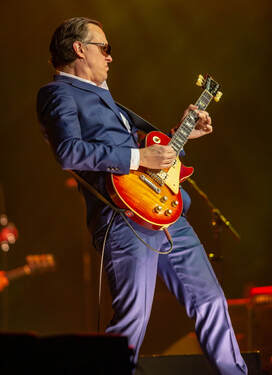 For the uninitiated, should there still be any blues rock aficionado on the planet unfamiliar with the name Joe Bonamassa, said artist is the highly acclaimed blues guitarist with an incredibly prolific output.
At last count his solo catalogue consisted of thirteen studio albums, more than that in live releases, successful side project Black Country Communion and collaborative get togethers with Beth Hart and jazz & funk outfit Rock Candy Funk Party (three studio albums apiece).

Which begs the question when does this guy ever relax, or find himself anywhere other than on a stage or in a studio?

Joe Bonamassa has played Glasgow a number of times and has ramped up the ante in world class band personnel, venue size and ticket price each and every time.

The first time your reviewer saw the American guitar slinger was back in 2006, in trio format, at the Ferry in Glasgow on a £10 ticket (and what a great gig it was).
​
Thirteen years later a Joe Bonamassa eight-piece band was at the ever-so-slightly larger SEC Armadillo.
The fact the show was close to a sell-out, on a Monday night, with ticket prices averaging out at three figures is testament to Bonamassa’s stratospheric rise in reputation, fame and pulling power.

Included in Joe Bonamassa’s current touring band are such luminaries as drummer Anton Fig who was / is a fixture on The Letterman Show and always, absolutely, on the percussive money.
Also meriting special mention is Nashville keyboardist Reese Wynans (an alumni of Stevie Ray Vaughan’s band no less), who is the perfect foil for Bonamassa.

Bass player Michael Rhodes is no slouch either (nailing the bottom end throughout the evening) while the horn section of Paul Cerra (saxophone) and Lee Thornburg (trumpet) were also as tight as the proverbial (on the night however they should have been slightly higher in the mix).
Backing vocalists Mahalia Barnes and Jade MacRae add to the Deep South/ delta blues authenticity of some the numbers, with both singers given the opportunity to flex their vocal chops.

Opening brace 'Tiger in Your Tank' (a Muddy Waters cover) and 'King Bee Shakedown' (from latest studio album Redemption) were delivered politely without too much fire in the blues belly but third song, 'Evil Mama,' a stand-out Redemption track, was Joe Bonamassa at his most convincing and passionate (which seem so be the case when he veers into the more riff driven and rockier blues numbers).

Driving home that rock-edged point was following number 'Just 'Cos You Can Don't Mean You Should,' featuring an extended solo from a guitarist genuinely enjoying himself (sections of the solo were shadowed by the ghost of Gary Moore, helped in no small part by the use of a Les Paul gold-top). 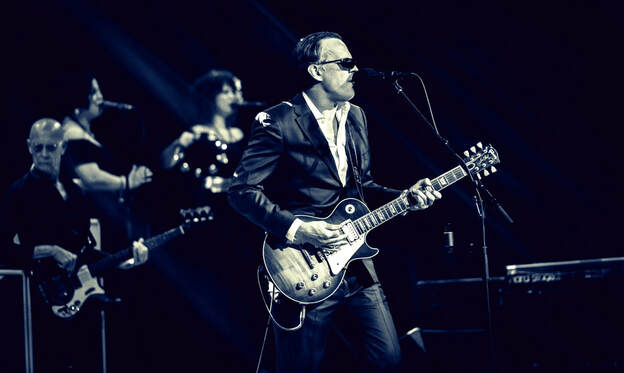 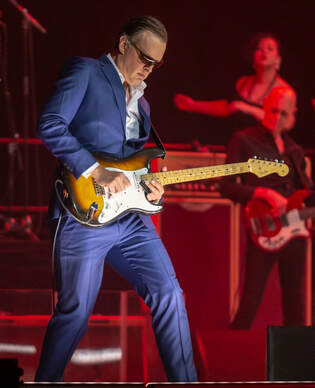 Blue shades in the blues shade​; Joe Bonamassa has come a long way since his Glasgow 'Ferry' trip.

​The set then took an unexpected turn with 'Self-Inflicted Wounds' or, if you prefer, Pink Floyd does the blues (an impression reinforced by the outro section featuring Jade MacRae riffing over the chord sequence in the same manner as 'Great Gig in the Sky').

The standard blues fare then returned in the shape of the pacey 'This Train' and the Zeppelin-esque 'Blues of Desperation' before 'How Deep This River Runs,' with its infectious chorus, saw an upturn in delivery and reception.

'Sloe Gin,' the Tim Curry song that has become a Bonamassa classic, was delivered with panache, not a little elan and a tour-de-force guitar solo that got the crowd fully onside.
It was only after 'Sloe Gin' – nine numbers into the set – that Joe Bonamassa spoke to the audience.
Whilst he is one of a number of musicians who lets their music do the talking a rapport could have been built sooner, especially given that when Bonamassa does address an audience he comes over as personable and humorous individual.

Following a Bluesbreakin’ rendition of 'Little Girl' the show headed toward its climax with an extended and full on 'Last Kiss' followed by an encore brace of solo acoustic showcase 'Woke Up Dreaming' and the once just another album track, now slowed down monster blues ballad. 'Mountain Time' (culminating in a standing ovation).

Said two-and-a-quarter-hour show was professionally delivered and featured an array of stellar musicians led by star attraction Joe Bonamassa who, when playing from the heart, is almost untouchable in the field of blues-rock.

But there's also an argument to be had that JoBo's theatre evenings are now more akin to West End productions than blues gigs – performance polish and production values over impromptu musicality and club sweat and blues tears.

Where there is no argument, however, is the fact that Joe Bonamassa is a great guitarist and great songwriter; it’s just a pity he no longer gets down and dirty in the manner of that Ferry gig back in 2006.

But at the end of the live performance day you pays yer money and takes yer blues gig or big production show of choice.