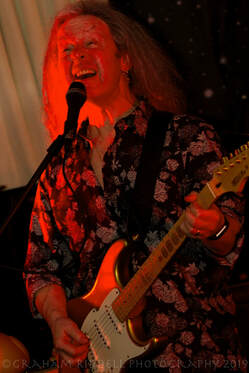 I’ve driven through the small Borders town of Innerleithen a fair few times but, for my sins, have to admit never having spent any time there – until now.

And I’m very glad I did; not only is it one of the friendliest little places I’ve yet encountered within my own bonnie lands it has the relatively new, but very welcoming, Borders Blues Club, the town’s social club transformed in to a live, blues based music venue every last Friday of the month.

This time around the club hosted the John Verity Band, who were making the first of their annual across the border, blues rocking raids as part of their 2019 touring schedule.

Innerleithen’s hospitable blues club has not been going long (this was only the fifth such event) but it has already picked up a reputation beyond its own Borders (geographical pun intended).
​
And you have to applaud the passion and dedication of the organisers, led by Paul and Cathy Burnett, that has led to the creation of a successful, non-profit making endeavour that relies on the help of locals, raffles and the like to be able to host live events at knock down ticket price (every penny of every ticket sale goes directly to the artists who have popped in to town to play). 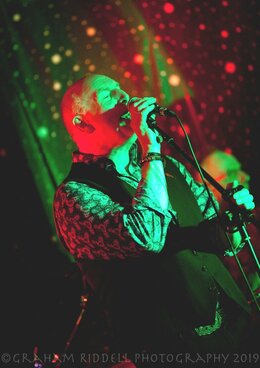 Unfinished Business have a very simple but effective musical modus operandi – to deliver good time, up-tempo, up on your feet for a dance, rhythm and (rocking) blues – the perfect antidote to the more staid or sit back and settle in audiences that frequent the tables, chairs and bar of many a music club but never the front of the stage.

With vocal assistance from Suzanne Taylor Little, who guested on a song or three in both lead and duet roles with Paul Burnett (a vocal blend that worked well) Unfinished Business ran through a gamut of well-known numbers including set opener 'Walking By Myself' (based on Gary Moore’s version) a rattlin' rendition of Fleetwood Mac's 'Oh Well' and Bad Company’s 'Can’t Get Enough.'
The results were a performance that was as much blues sing-a-long as it was blues standards.

Given the audience, a packed crowd of predominately (but not all) local music fans who were there as supporters of live music and not necessarily au fait with John Verity's material, it did no harm that the aforementioned Mr Verity and his band – drummer Liam James Gray (a young man with an old-school music head on his shoulders) and the blues solid bass lines of John Gordon – included a healthy selection of notable covers in the set.
John Verity’s love of so many, wide ranging classics of rock and blues (from the band’s power trio take of 'Hold Your Head Up' and 'God Gave Rock and Roll To You' (nods to John Verity’s Argent past) to 'Cocaine' and a fully blues’d up 'I Put a Spell On You') guaranteed sing-a-long song recognition for those not so familiar with the noted guitarist’s current work (which happens to be some of his best – Verity's last two studio releases, My Religion and Blues to my Soul, are his strongest back-to-back blues based offerings to date).

And while John Verity is still in mighty fine voice (strong deliveries with a deceptively high upper range) it’s his prowess with beloved Fret-King Corona "JV" signature guitar, that truly does the talking, as heard on numbers such as the expressive and autobiographical 'Hope For the Best' and the weightier, pulsating blues rock of  'Blues in Heaven' (the latter written for a good friend now sadly passed).

Bang on about Joe Bonamassa all you want but in the smaller but no less rich arena of blues clubs and blues festivals, John Verity, for tone and touch, is your player of choice. 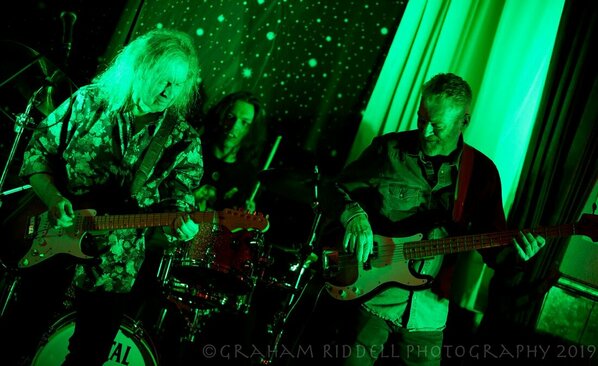 Tone hound John Verity, Liam James Gray and John Gordon - in the green hued blues groove
​John Verity can also crank it up and pedal board it out, as exemplified on the closing brace of 'Star Spangled Banner' and 'Purple Haze,' a fully fuzzed and howling rock guitar bombast played in homage and tribute to Hendrix’s famous Woodstock performance.

But there’s also some fun to be had between the sublime blues and ridiculously accomplished rock guitar moments – the rhythm and bluesy 'Too Hot To Hug' for example allows the band to loosen up in the semi-improvised middle section; Liam James Gray and John Gordon getting rhythmically jazzy or funky depending on where John Verity decides to take the song.

Innerleithen isn’t exactly the rock and roll capital of Scotland; nor do all blues roads lead to the Peeblesshire town; but it’s equally fair to say FabricationsHQ will be stopping by, and not passing through, more often in the future.

I'd invite Scottish and across the border blues fans, supporters of live music and those that enjoy the atmosphere of friendly and welcoming blues clubs, to do the same.