Under the spotlight and passing the baton
King King (with Sari Schorr) – 02 Academy, Glasgow, 17th February 2019 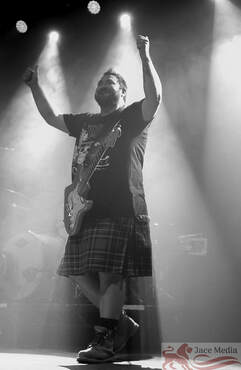 Given that King King’s final show of their 2019 UK tour was a home gig for Alan Nimmo (and in a more embracing way the band, who have long since been adopted as "oor ane"), a celebration of ten years of King King and a farewell to departing co-founder and bassist Lindsay Coulson, this was always going to be a lot more than just another gig.

There was a packed 02 Academy floor and a tangible atmosphere of expectation well before King King took to the stage, all of which benefited Sari Schorr and her band as they delivered a forty-five minute set that concentrated on the New York Blues Hall of Fame inductee's 2018 album Never Say Never.

Sari Schorr's debut album Force of Nature was a statement album and served set lists well across Schorr’s first couple of tours with her original band The Engine Room.

But that was then; this is the Never Say Never now in the company of bassist Mat Beable and drummer Roy Martin (who have cemented themselves as a blues rock solid rhythm section), keyboardist Stevie Watts (replacing Bob Fridzema on this tour) and new kid on the six-string blues rock block, Ash Wilson
(a very different player to previous guitarist Innes Sibun but Wilson is no less capable – and the perfect, feisty foil to Sari Schorr’s on stage sass and vocal prowess). 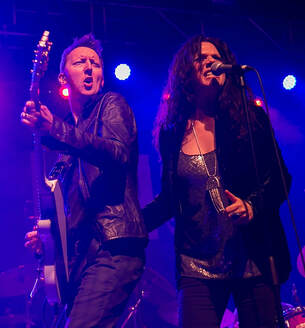 If you have Ash Wilson on your blues team you're pretty much on to a Schorr thing.
Opening with the rock swagger and bluesy roll of 'The New Revolution,' Sari Schorr and band smoothly segued to the one Force of Nature song to feature, the mid-tempo sway and pulse of 'Damn the Reason.'

The song’s musical and lyrical weight (the harrowing but all too prevalent subject of domestic violence) was reinforced by the fact it’s the chosen Force of Nature number for shortened/ support sets as opposed to Schorr’s signature number, her powerful "channelling"
re-interpretation of 'Black Betty.'

Other highlights included the double covers of Bad Company’s 'Ready For Love' (with tasteful piano remarks from Stevie Watts) and Ian McLagen’s ballad 'Never Say Never' and the full belt Sari Schorr vocality and vibrato  showcased on the rockin' 'Valentina' and the bluesier but no less impacting ode to blues legend Robert Johnson, 'The King of Rock and Roll.'

It’s fair to say Miss Schorr made a lot of new friends on the night and across the entire tour, which should equate to an even healthier following when she returns to the UK in March for her fourteen date headline tour.

From the 'Highway to Hell' intro opening sing-a-long (conducted by an air punching, mandatory kilted and wide-grinning Alan Nimmo) to a truly emotional and spirited show closing rendition of Clapton’s blues-de-force 'Old Love,' this was King King’s night, Lindsay Coulson’s day and a celebration of a band at the top of their ten-years-on game featuring the talents of Messrs Nimmo and Coulson, keyboardist Jonny Dyke and King (King) of the blues groove drummers, Wayne Proctor. 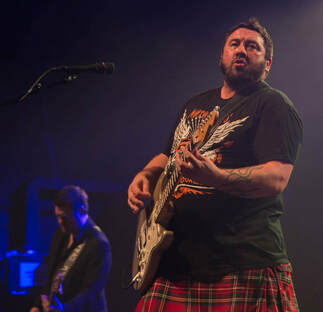 Alan Nimmo and his (stage) right hand man these last ten years, Lindsay Coulson
​A reworked set enhanced things further, from the opening salvo of 'Broken' (Alan Nimmo, over some great Hammond organ from Jonny Dyke, singing the blues for the state of the world) and a kick-ass rendition of 'Lose Control' through to the radio friendly 'Coming Home' from second album Standing in the Shadows.

Dedicated on the night to the recent and unexpected passing of Scottish drumming legend Ted McKenna, the "rest your eyes, I’m coming home" chorus line took on extra poignancy and significance.

​The soulful, heavy blues rock of 'Rush Hour' and epic 'Stranger to Love' (which FabricationsHQ has described as "nothing less than 21st century blues rock's Mistreated") were roar or approval highlights of a band in full sync and full flow, only to be matched by a rawkin' rendition of '(She Don’t) Gimme No Lovin'' (the best song Thunder never wrote) and a ridiculously grooving version of 'Crazy.'

As an aside, Lindsay Coulson and Jonny Dyke funked so much bejesus out of their instruments on 'Crazy' I swear said bejesus jumped off the stage, exited the venue and boogied on down Eglinton Street.

Lindsay Coulson’s final fling with King King included a passing of the bass baton to  Zander Greenshields.
A "well kent" bass playing face around these here parts and further afield, the well respected musician played with Alan Nimmo in the pre-King King past and, more lately, Stevie Nimmo.

The "new boy" was introduced on to the stage and invited to play on a fun cover of Whitesnake’s 'Don’t Break My Heart Again' (the big bass note and beat that drives the number made for a perfect break-him-in-gently introduction or, as Alan Nimmo so eloquently put it just before kicking in to the song, "try no' to fuck it up!"

Zander Greenshields then showed just what a great fit he is, and will be, on the slow melodic blues gem from Reaching For the Light, 'Take a Look.' 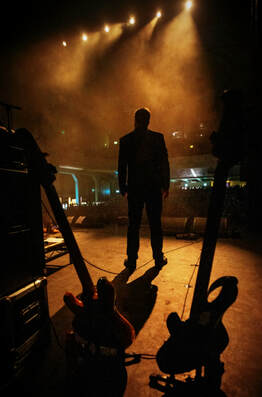 Lindsay Coulson returned to the fold one last time for a final quartet of numbers that included 'You Stopped the Rain' (written by Alan Nimmo for his big brother Stevie, who was in the wings but wouldn’t appear even in the face of serious audience encouragement – brotherly love of respect to the fact this was King King and Lindsay Coulson’s night and no-one else’s) and final number 'Old Love,' which hearkened back to the band’s earliest days.

For once, Alan Nimmo didn’t dial the solo down to amps off level on the Clapton classic; instead he played a beautifully understated solo that was soaked with feel before cranking up to a final, closing solo that was, frankly, the most inspired, joyous and emotively phrased I have yet heard Alan Nimmo play.
But given the emotion of the night and saying his musical goodbyes to his right-hand man (in more ways than one) of these last ten years, that’s perhaps no surprise.

With King King on the potential cusp of even bigger and better things (the band have signed a management deal with Siren Artist Management Inc of Los Angeles) this performance marked the end of one chapter and the start of another.

It was also a reminder that while Alan Nimmo has worked his kilted arse off to put King King where they are now, he couldn’t have done it without his pal – who may have stood under the band’s stage spotlights for the last time but will always be a member of the King King family.