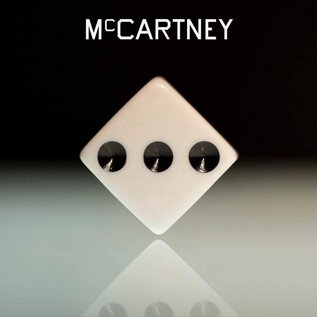 Let me put my cards on the table from the off and admit that I’m biased. I’m a Beatle nut and have been since I was six years old.

As a professional musician you could make a strong case that, outside of my family and friends, Paul McCartney has been the biggest single influence on my life.
Most of what he has released as a solo artist has entertained me but all of it fascinates me, especially his McCartney and McCartney II albums – famously insular records made up of songs, half songs, instrumentals, sketches and ditties on which, more often than not, he plays all instruments.

This is key, as musicians as untrained but instinctively musical as Paul McCartney approach various instruments with a distinctive individuality that sets the music apart from the slick studio session-player shine that can sanitise even the best songs.

And now, from the very murky depths of the COVID-19 lockdown comes McCartney III, the third instalment in his 78-year-old Royal Beatleness’s triptych of home-grown records and the follow-up to 2018’s Egypt Station, an occasionally fine album that featured long-standing sidekicks such as Rusty Anderson and Abe Laboriel Jnr, among a host of other hired hands.

Egypt Station was sixty-six percent good album, running out of steam ten of the exhausting sixteen tracks in; but whereas that album was over-egged in both personnel and song selection, the appeal of McCartney I and II was their lean economy, both in sound and spirit.
From such rural isolation and his own dogged "I’ll do it my way" mindset came two of his most appealing, unfettered and interesting albums.

McCartney III is also produced by the man himself with very little outside help.
It’s possibly the closest we will get to a genuine "lockdown" album from a major act – not for Macca the full band reunion of Bruce & The E-Street Band, or the indie-mainstream mash up of Taylor Swift and The National for her Folklore album.
This is Sir Paul, sailing his ship alone, charting his own course and, very possibly, even tuning his own guitars.

The very news of the album’s imminent release was itself a comforting dispatch, seemingly from a time when people bought records from Woolworths, rented televisions from Rumbelows and social distancing was something gentlemen did respectfully in public when wanting to break wind.
The public agreed with me, buying it in busloads and giving Paul McCartney his first number one album in over thirty years, since 1989’s Flowers In The Dirt.

But, I hear you ask, is it any good and can a self-confessed Beatle Baby, be impartial and objective?
Well, I will endeavour to answer the first question, which by its very nature, may or may not answer the second.

The album opens with 'Long Tailed Winter Bird,' an overlong acoustic guitar-led jam.
The track bodes ill for our journey with Paul as it comes off as more self-indulgent than playful or spontaneous.
The songs start with the second track 'Find My Way,' which is far more familiar territory for McCartney fans – a solid melody, admittedly fairly bland lyrics, but full of fun and interesting instrumentation – exactly the kind of thing we bought the ticket for.

'Pretty Boys' is the first of three lovely solo acoustic tracks that pepper the album, the 'Kiss of Venus' and the genuinely sweet 'When Winter Comes' being the others.
Macca’s trademark acoustic rhythms are all present and correct, the most pleasant surprise being the tone of his voice – the subject of much derision in recent years, but on these tracks you can close your eyes and imagine it’s the mid 1970s all over again. Well, it has to better than 2020 was, doesn’t it?
'Women and Wives' is a superb piano ballad, darker and lower vocally in tone than we are used to hearing Paul McCartney sing.
Without the kitchen sink of an expensive full band production, it’s easy to hear how he could, at one moment, be sitting at the piano toying with this chord sequence and in the blink of an eye it’s on tape as a song.
It’s exactly those insights that make McCartney III such an engrossing journey and another insight into the working methods of possibly the most natural, instinctive and gifted songwriter of them all.

Not everything on here is as interesting – the throwaway grub-rock of 'Lavatory Lil' and 'Slidin’' may not have passed a trusted committee meeting – but oddly neither are they out of place on an album of curios.
Those throwaway rockers sit seemingly comfortably aside another highlight; the eight-minute hypnotic vibe of 'Deep Deep Feeling,' which a few minutes in breaks into a sublime piano motif that spirits us into the sweet spot of a superior melodicist let loose in a studio full of musical toys to tinker with.

There’s a nod to his former employees on the likeable, Beatlesy stomp of 'Seize The Day,' which leads to the most crucial point of all.
This is a Paul McCartney album – arguably the greatest single songwriter in the history of music.
That’s a big claim, but you have to admit he’s up there and in the running.

When preliminary Picasso sketches and doodles are fetching millions in auction, we should be thrilled that Paul McCartney so obligingly lets us peer behind the green curtain to see the Heath-Robinson like machinery of his musical mind at work.
There may be Pro-Tools, Logic and bit rate files involved, but it all still feels very nuts, bolts, hot air balloons and steam engines… perhaps that’s the rudimentary nature of his drumming at play, or the creaky musical segue-ways it feels he is tape-splicing together on the ambitious 'Deep Deep Feeling,' but it’s incredibly human, and there’s nothing I like more in my music than a human touch.

If you are interested to hear what a musician and songwriter of Paul McCartney’s calibre does in his downtime, then McCartney III is an absorbing album that gets better on every listen.

If you prefer his mega budget, fully arranged big band productions then perhaps it’s not for you, and you’d be advised to keep your social distance.

Adam Norsworthy is a singer-songwriter with a number of acclaimed solo albums under his belt including Rainbird and The Circus Moon  https://www.adamnorsworthy.co.uk/home
He is also frontman and primary songwriter of melodic blues rock band The Mustangs and part of R&B/rock quartet The Milk Men  https://www.themustangs.co.uk/   http://www.themilkmenmusic.com/index.html