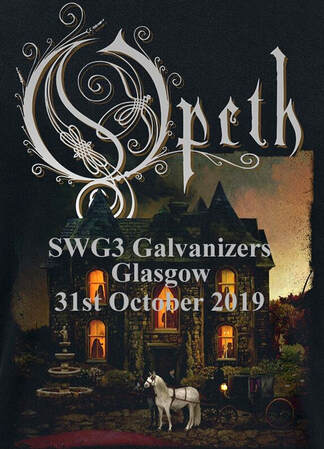 Opeth returned to Glasgow on Halloween night with a tour promoting their new (and thirteenth) album In Cauda Venenum (a Latin phrase which roughly translates as "unwanted surprise at the end").

For the uninitiated, Opeth is a Swedish band formed in 1989 that are generally referred to as progressive metal. Although the band has had several personnel changes, ever-present Mikael Åkerfeldt has been the lead singer/ guitarist/ front man and driving force of the band since 1992.

Opeth’s music draws on many diverse influences including progressive rock, folk, blues, jazz and death metal (there are not many bands which include a light acoustic guitar section followed by a full-on metal assault with death growls in one song).
There is also a clear influence of early prog-rock with the use of mellotrons and ornate keyboard parts.

An increasing feature of Opeth live shows is the attention to detail of the stage set and lighting effects, something that was very much to the fore at the SWG3 Galvanizers venue.
​
Galvanizers is a new-ish part of the SWG3 complex and a veritable barn of a place with a potential standing audience of 1250.
That Opeth had sold it out tells you that 1) there is clearly a hard-core following for Opeth (some of whom had travelled a fair distance for this gig) and 2) are a band vying for promotion to the premier arena league of progressive metal.

Opening act, Icelandic trio The Vintage Caravan, were far better than their frankly awful moniker would suggest.
They were enthusiastic, high-energy and had some strong songs in their set, including the punchy 'Reset' and the blusier, chorus catchy 'On the Run,' both from most recent album, Gateways.
The whole Vintage Caravan vibe is reminiscent of 1972 and given their sound and style that’s not necessarily a bad thing.

The band’s vocalist and guitarist Óskar Logi Ágústsson looked like a star in the making but, as per usual, the sound quality for the support was, to keep it polite, less than optimal.
As this reviewer and many others have said before this happens far too often to be a coincidence and, with increasing gig prices for the bigger bands/ shows, the public are being sonically cheated.

Opeth showcased four songs from In Cauda Venenum with atmospheric opener 'Garden of Earthly Delights' setting the live show scene (Gregorian chants, coupled with some Tangerine Dream/ Pink Floyd type sequencers and a mellotron) as the band walked on stage.

As it does on the album 'Dignity' (which is as far from the Deacon Blue number as you could imagine) then kicked in, as did the extremely impressive and choreographed light show.

It is difficult to convey in words quite how impressive this stage show, built around a massive projection screen and large-scale video screens around the three keyboard/drum/bass risers, actually was.
The simultaneous effect of videos projected on all four of these screens plus other state of the art lighting is a full-scale assault on the senses.
The soundtrack to all of this visual mayhem is highly impressive but also ominous sounding. 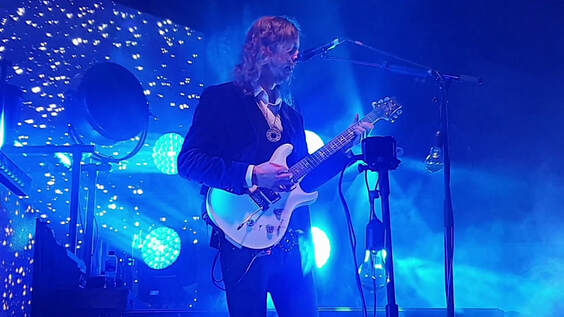 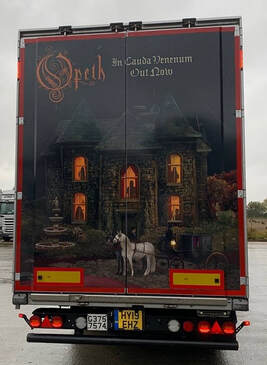 One of the band’s heaviest numbers, 'The Leper Affinity,' was then followed by 'Heart in Hand.'
The latter is probably the best number on the new album and encapsulates Opeth at their best – a menacing opening riff, a strong melody and then a diversion into another riff before driving towards a guitar solo in epic fashion. There is so much packed into this song that it stands repeated listens.
There is also, of course, the Opeth staple of the breakdown to an acoustic section (a gorgeous melody in its own right) before the number drifted to its sonorous end.
Great stuff, and all accompanied by fantastic lighting and video projection.

​The Glasgow crowd were fully on-side by now with the mosh-pit/wall of death breaking out down the front
(an unusual, curious and humorous sight when the acoustic sections are being played).

The fans are then delighted to hear an older number 'Reverie/Harlequin Forest' from 2005 album Ghost Reveries.
At a little over eleven minutes, there is no respite from the visual and sonic assault but the level of intensity is admirable; this older number also ticks all the boxes of riffing/ death growls/ acoustic interludes.

Some respite is offered however with 'Nepenthe' from the Heritage album; it's a song that amply illustrates some of the band’s jazz and folk influences.
A special mention here for lead guitarist Fredrik Åkesson; not only is he an extremely good player he also knows when to take a back-seat, never over-staying his welcome in the solo sections.

Opeth continued to deliver a few other, older, crowd-pleasers before ending their main set with the closing number from In Cauda Venenum, 'All Things Will Pass,' all of which received a great reception.
Encore numbers, crowd and fan favourites 'Sorceress' and 'Deliverance,' were played with ferocity and lapped up by the Glasgow audience.

There’s no doubting the musicality of this band but the only lightness to the over-bearing shade is the charm of Mikael    Åkerfeldt's banter with the audience.
And if I had to be critical it’s that Opeth’s compositions, even live, are a bit of a one trick pony (there are only so many times you can listen to portentous riffing and a death growl here and there before dropping to the whimsical folk section and then back to the brutal riffs).

Overall however this was a very enjoyable gig from a band who are actually more than a five-piece live, because you have to include the stage lighting engineers’ responsible for the videos and lighting effects.

On this form, and with In Cauda Venenum, Opeth are on a roll and could well be heading, in their own fleet of Opeth trucks, for your local enormo-drome next time around as they look to establish themselves in that aforementioned premier arena league of album and performance bands.