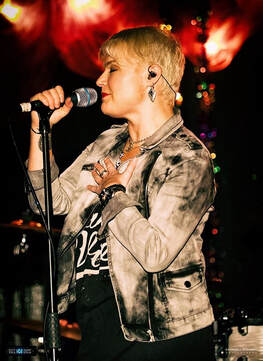 For any artist, there is an obvious downside to playing a new venue.

And that of course, in this case at The Ice Box in Glasgow (a just-turned-a-year-old charity shop, music & arts centre that is still trying to establish itself alongside more well-known club venues in the city) is guaranteeing an audience.

That concern is doubled when it’s a Sunday, and an extremely wet and cold one at that (February in Scotland; what’s new there other than even more extreme Atlantic weather patterns).

But, blues ladies and rock gentlemen, a relatively small but highly appreciative audience for Rebecca Downes and her band, coupled with a very healthy sized crowd the night before in Edinburgh (a Saturday night gig in the capital hosted by the established and well-regarded Edinburgh Blues Club? What’s not to like?) is the very Yin and Yang of Rebecca Downes’ career thus far.

Which is all the more of a mystery given this is a redoubtable vocalist & accomplished performer who, even in a crapshoot musical world where money and bought Social Media followers talks and the more honest and hard-working act walks (to their next gig with gear in hand from the car park) should be playing to theatre sized audiences and consistently offered top-line support slots (the Rebecca Downes Band’s support to Magnum in 2018 being a case in highly respected by their peers point).

​The collective talents of the band were highlighted at The Ice Box right from the get-go and blues tinged, melodically rocking opener 'Take Me Higher,' which also opens current album More Sinner Than Saint.
The song also raises the bar in terms of Downes and guitarist Steve Birkett’s songwriting partnership and just how musically impacting both band and album (which garnered critical praise across the boards) are.

The weight and sonic energy of the newer songs also came across extremely well live, from southern-tinged blues rocker 'Wave Them Goodbye' (featuring Steve Birkett duetting and harmonising with Rebecca Downes), out and out rocker 'Hurt' and the upbeat 'Big Sky' through to Adele shaped brace 'More Sinner Than Saint' and 'Stand On My Feet.'
The latter, the fulcrum song of More Sinner Than Saint, is Rebeca Downes’ musical and lyrical calling card. 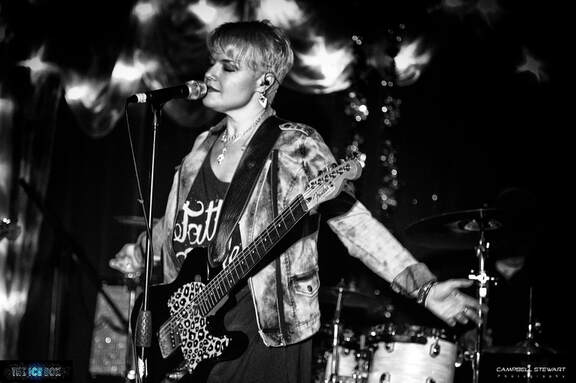 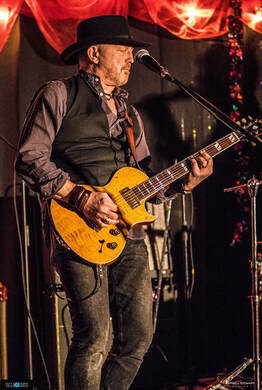 sharp-dressed guitar slinger Steve Birkett
Not that the previous two albums were posted missing – 'Fever in the Night' (from debut release Back to the Start) remains a funky little jazz-blues highlight of any set it features in while 'Sailing on a Pool of Tears' (from Believe) is a melodic blues tour-de-force that features some beautifully complementary six-string remarks from Steve Birkett (a master of giving the song just what it needs for maximum effect).

The other Believe songs played, rhythmic soul-blues number 'Night Train' and the album’s title track (which builds and increases in tempo to become a southern slide rockin’ belter of a song) remain two of the strongest songs in the entire repertoire.

Songs such as 'Sailing…,' 'Believe' and 'Stand On My Feet' also vocally reinforce why Rebecca Downes is the best British female singer currently performing and recording in the rock-blues scene.

Miss Downes has the range and emotional quotient but she also has vocal intelligence in spades and impeccable phrasing.
The latter two traits are crucial assets in being a 'complete' singer and why others with incredible ranges come up as Major Fails (take a five octaves all in one line bow, Miss Carey).

Other set highlights included a feisty cover of Led Zeppelin's 'Rock and Roll,' encore number 'With a Little Help From My Friends,' 'Breathe Out' (driven by a funky little drum pattern) and the "Woah-oh-yeah!" muscle of 'If I Go To Sleep.'

The More Sinner Than Saint studio versions of the latter pair feature guest guitarists Tony Clarkin and Alan Nimmo, respectively, but Steve Birkett took on those solos admirably, the latter all the more challenging given the King King main man was in the audience (leading to Birkett’s shout of "awkward!"). 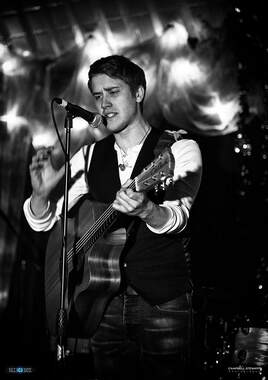 Stoney Broke (aka Jake Scott)
Rebecca Downes and Steve Birkett are the vocal and six-string (with some tasty slide) focal points of the band but Nigel Darvill (keys), Neil Ablard (drums) and Vince Yarrington (bass) are no slouches.

Nigel Darvill had the unenviable task of replacing extremely accomplished keyboardsman Rick Benton (that he was grabbed by Tony Clarkin almost as soon as Mark Stanway left Magnum tells a talented tale) but more than holds his own, especially when creating atmospheres around the more spacious numbers.

Neil Ablard and Vince Yarrington are a tight and tidy rhythm section upon which everything else is built.
Ablard deserves a nod for powering on through flu but special mention has to go to Yarrington, who threaded tasty bass lines between Rebecca Downes and Steve Birkett’s own interplay.
He also has the knack of knowing just where and when to add four-string punctuation or leave space for the song to breathe.

Prior to Rebecca Downes bringing warmth to a cold Glasgow night Stoney Broke (aka Jake Scott) delivered a 30 minute acoustic support slot that once again proved the young Dumfries based performer has his head above the singer-songwriter crowd (but, like so many other genuine talents, struggles to get the attention he deserves).

Songs such as the punchy 'Nothin’ But the Truth' and the more delicate 'Southern Cross to Glasgow Central' (both from his If it Ain’t Broke EP) dovetailed nicely with newer "break-up" songs such as 'What About the Flowers,' all cleverly arranged around looped acoustic sequences that allowed for some well phrased electro-acoustic solos over the musician’s own backing.

The Ice Box’s time as a venue will Cometh (its charitable operation and efforts under the guidance of Jamie McDermid and his team should be applauded as loudly as any band that plays there) as it will, surely, for Rebecca Downes and her band.

Anything else would be highly unSaintly and a musical Sin.