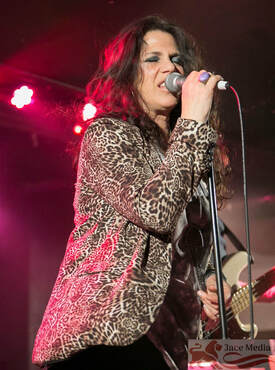 There was a touch of very welcome déjà blues as Sari Schorr and band swung in to old Glasgow town as part of her headline UK tour in promotion of latest album Never Say Never.

Only three weeks before the powerhouse New York vocalist had been in Glasgow as Special Guest to King King on the final show of the celebrated British blues rocker’s 10th Anniversary UK tour and last gig with departing co-founder Lindsay Coulson (and, as it would turn out, long-serving drummer Wayne Proctor).

It was also Sari Schorr’s fourth appearance in Glasgow in two years, first with original band The Engine Room, followed by her debut Oran Mor appearance with then new but equally well fitting set of musicians Ash Wilson (guitars, vocals), Mat Beable (bass, vocals) and Roy Martin (drums).
​
By a twist of elsewhere fate and other duties circumstances however keyboardist Bob Fridzema has yet to be spotted in Glasgow as a member of Sari Schorr’s band; her first Oran Mor gig featured the capable talents of Adrian Gautrey while the shows with King King and March dates of this tour have keyboardsman of British blues rock note, Stevie Watts, delivering the tasty piano lines and throaty, Hammond-esque swirls.

Before Sari Schorr and band hit the Oran Mor stage at a ridiculously early time (yes folks, the dreaded curfew again, this time so a disco could swing in to action at 10pm) Aberdeenshire trio Full Fat entertained around half the eventual audience (the majority still finishing dinner at home) with a predominately mellow, rhythm and soul blues sounding half hour set.

For rhythm and soul blues this band be, formed around the very distinct musical stylings of Fraser McKain (lead vocals, guitar), Fraser Urquhart (bass, vocals) and Simon Rattray (drums); the firm and funky bass lines from "Wee Fras" take the lead over the guitar of "Big Fras" (who is more about digging the rhythm with occasional splashes of soloing) while Simon Rattray adds the beat, groove or blues-swing (the latter to the fore on 50s throwback rockabilly lite number 'Doctor Longhair' from latest release, In the Dark EP. 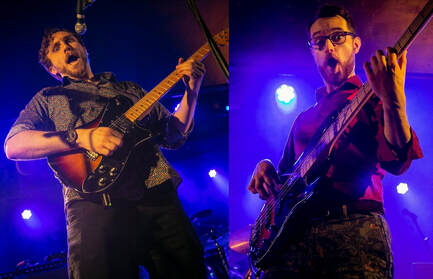 Full Fat's "Big Fras" and "Wee Fras" give it the Full Face for the camera
The collective results are a band that are a little left of centre in blues terms but that’s a refreshing change (up) from the blues rock norm and something that hasn’t gone unnoticed in their native north east as a clutch of nods and nominations (including finalists of the One to Watch Music - Pride of Aberdeen Awards) underline.

Even when Full Fat do play the blues, as on 'Come Break My Heart,' they refuse to follow slow blues fashion; the song comes off as Elvis Presley sings the blues with Fraser McKain’s added howls coming not from his guitar but his throat.

Set closer 'Temper Temper,' the song and clever video that has been garnering the band attention of late, is a chunky slice of big beat rhythm and blues rock, but still very much on Full Fat’s own terms.

Bu the danger of having such a distinct, almost alt-blues sound is having to ply that trade in a blues rock club world where the audiences tend to like their blues cryin’ and their rock, well, rockin’.
A better weighted set, or another cover added (their version of 'I Put a Spell On You' was moody enough to be a good Full Fat fit) might well stand them in better stead for future support slots.
​​
Sari Schorr and her band most definitely do that blues crying and rock rockin’ thang, but they do it as well as any on the circuit, fronted by one of the best (and strongest) voices in blues rock, on either side of the pond.

Examples? The depth of vocal (in both senses) on Sari Schorr’s highly impacting cover of Lead Belly's 'Black Betty' and strength of songwriting as carried on numbers such as 'The King of Rock and Roll' (a nod to the soul-selling tale of Robert Johnson via suitably atmospheric opening) and 'Thank You,' a feisty 'n' fiery, sarcastically clothed thanks-for-nothin’ piece of blues rockin’ venom that has Schorr and band firing on all five cylinders.

But changes of pace and different blues coloured textures are also part of the live show.
Sari Schorr’s cover of the Mick Ralphs penned 'Ready For Love' (with purposeful but never over-reaching vocal and tasteful piano remarks from Stevie Watts) suits the life trials and relationship tribulations theme of the Never Say Never album perfectly; the other Never Say Never cover, the late and great Ian McLagen’s ballad of that same name, is Schorr’s soulful offering of comfort and healing to love lost.

The surprise cover package came by way of the band’s highly rhythmic (take a groove pumpin' bow, Mat Beable and Roy Martin) take of 'I Just Wanna Make Love to You.'
The surprise wasn't the song (it’s flitted in and out of the set these last two years); it was the introduction of Alan Nimmo to lead the six-string charge and blues out on the extended bars of soloing (and it’s not every guitarist Ash Wilson would hand his beloved weapon of choice over to).

The guest player rendition of 'I Just Wanna Make Love to You' was all the more impressive given that, to let you in to the secret behind the appearance, Alan Nimmo’s only cue to how the song was played was at soundcheck while watching Messrs Martin, Beable and Wilson instrumentally run through the number. 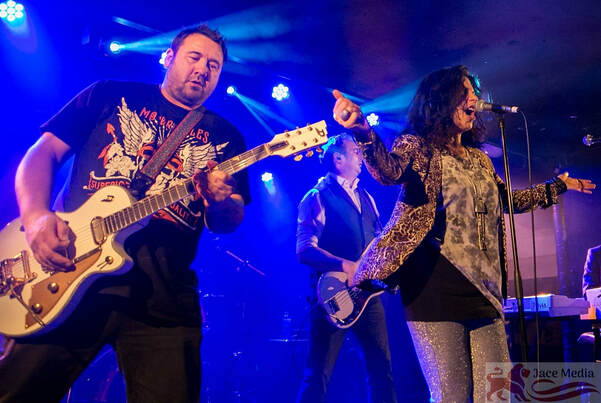 Wait, is that (half) the Nimmo Brothers or Sari Schorr and her band? For five guest appearance minutes or so, both.
But Sari Schorr’s own material is the equal of the covers and, in many places, far weightier.
Set opener, the slower, rock ‘n’ bluesy roll of band composition 'The New Revolution' is a slick and vocally sassy nod to Martin Luther King Jr. and a driven statement of how we need to be taking heed of his message now more than ever… 'Valentina' (Sari Schorr’s alter ego) rocked like the proverbial, as did Schorr’s vocal… 'Freedom' (written with composer-musician-producer Steve Wright) is a volatile gun shot of a number in plea to have that very sound removed from Schorr’s US homeland… 'Back to LA' (the band doing a fine job live of what is a fuller sounding, Nashville styled number on album) closed out the evening in impressive, radio friendly style.

Nor was the Force of Nature album forgotten. Beyond the showcase statement that is 'Black Betty' three other songs from the debut featured including the sassy blues sway of 'Demolition Man,' complete with equally sassy and full bodied solo from Ash Wilson (make no mistake, this man is a serious player on the British blues rock scene).

There’s an argument that Sari Schorr should be on her way to attaining the album sales stature and ticket selling heights of the likes of Beth Hart, but the hard facts of the hard slog that is the blues rock circuit is fate, timing, circumstance and luck now play as much a part as talent, ability, passion and work ethic.
​
But on this showing from the blues gal from Brooklyn? Never Say Never.