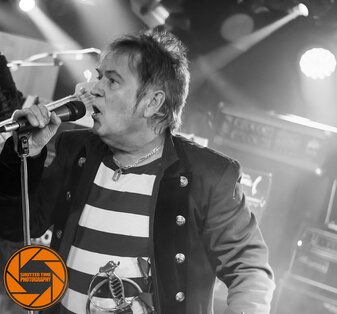 On 30th November 2018 SAHE entertained the ‘Nought rock troops on St Andrew’s night, making for a SAHB-a-long celebration of one of Scotland’s most revered rock and roll sons, the Auld Country’s official Saint and his national day, all in one rock and roll go.

Given that a lot more people were commiserating than celebrating north of the border, SAHE were a great tonic for the Brexit blues, from an opening triple salvo of 'Faith Healer,' 'Midnight Moses' and a rollicking
'St. Anthony' through to that party sing-a-long finale that included 'Buff’s Bar Blues,' 'Gang Bang' and 'There’s No Lights on the Christmas Tree Mother' (everybody: "they’re burning big Louie tonight!"). 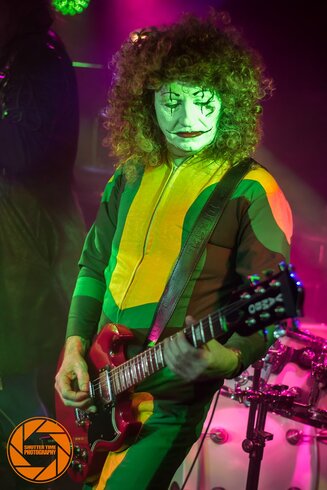 But it wasn’t just about the theatrical prog, rock and pop gravitas of the SAHB songs, this is a band that can play their respective parts, individually and collectively, to deliver that Sensational Alex Harvey band experience (hence the name).

Andy Massie (who has a second alter ego in Andy Brilleaux, fronting another seriously good Scottish tribute, Dr Feelguid) plays the role of Alex Harvey admirably, without ever trying to emulate or vocally mimic the great man (which would be a mistake on so many levels).

From spray painting Vambo Rools on the brick wall poster to his trench coat’ed 'Man in the Jar' persona, Andy Massie plays his part to the full while Brian Cartwright acts as the perfect six-string foil in full Zal Cleminson Pierrot/ mime regalia.
More importantly, Cartwright has those big, thick Zal Cleminson chords and riffs down pat while also having the ability to produce some wicked little solos.

On the night Brian Cartwright also ‘died’ on stage while flat on his back, still playing and kicking his legs in the air (in time) after being ‘shot’ by Harvey-Massie during 'Gambling Bar Room Blues.'

As a SAHE related aside, it’s interesting to musically note a case of tribute life imitating original artist...
Previous SAHE guitarist Willie McGonagle recently joined forces with Zal Cleminson to write material and possibly put a new band together from the ashes of the sadly short-lived Sin'Dogs, with whom Nelson McFarlane (a multi-genre player who makes all five of his bass strings count) and David Cowan (whose 70s Hugh McKenna 'hair and shades' look complemented his excellent McKenna-esque keyboard work) also played.

Not to be outdone and in a clearly intentional Sin’ful nod, Messrs McFarlane, Cowan and their SAHE amigos performed a heavyweight, rock-metal take of 'Isobel Goudie' that was a straight lift from the Sin'Dogs arrangement of the SAHB classic (nice touch, boys). 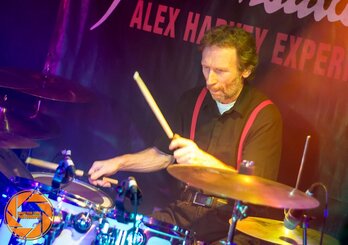 ​Ted McKenna was one of Scotland’s greatest ever musicians, let alone drummers, so John McAvoy has a role to play that many would not envy.

However McAvoy is no slouch behind a kit, as was particularly evident on a noteworthy and extremely well received drum solo (he had been reluctant to do one pre-show and only acquiesced through continued band cajoling) that held a fast-paced, high percussive tempo throughout (not dissimilar to the 'Hot City-Vambo' rhythmic beat).

From the swampy and gritty guitar stomp of 'Amos Moses' and the trippy pop of 'River of Love' through to the "Yoh-Hoh-Hoh" cries of 'Tomahawk Kid' and on to the vaudevillian 'Next' (Andy Massie nailing the narrative vocal phrasing of Alex Harvey), SAHE delivered both the SAHB hits and the humour.

The latter was perhaps most notable during 'Framed' when Andy Massie delivered the classic Harvey line "ah never did nothin’!" only for Brian Cartwright to reply with the accusatory retort "Aye you did… did you no' shag my sister?" (a paraphrased nod to the now legendary shout from an audience member at a Glasgow Apollo gig all those SAHBtastic years ago).