Skintrade – The Show Must Go On 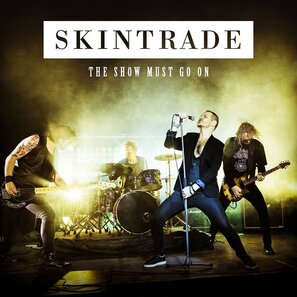 Swedish quartet Skintrade might still be best known for their critically acclaimed, self-titled rock-metal debut of 1993, an album the band, unfortunately, failed to build on with the decidedly mixed bag of 1995’s Roach Powder.

The group subsequently disbanded but reunited some sixteen years later for Past And Present, an 'old and new' compilation.
There then followed the seriously weighty Refueled in 2014 and, a year later, Scarred for Life.

Those albums helped reinstate Skintrade in the ears and concert going eyes of rock fans in Sweden and other parts of Europe but, like so many other solid rock acts out there, they don’t have the name or numbers they deserve.

Kudos to the band then for not just delivering on fan demanded new material but, with The Show Must Go On, their best album (more accurately a mini-album of 8 tracks and 29 minutes) to date.

While the last two releases were edgier, riff-led affairs The Show Must Go On finds Skintrade in a more classic rock orientated setting.
It’s a setting that fits their 21st century sonic profile extremely well, especially the voice of front man Matti Alfonzetti (some may recall or know Alfonzetti from his short time with Jagged Edge or Red, White & Blues, who both featured guitarist Myke Gray).

Opening number 'Woman' catches that classic rock sound perfectly.
A heady blend of Zeppelin meets blues rock with a little organ keyboard employed to fill out the sound, 'Woman' is an out and out winner.

Following number 'Chosen Ones,' a lyrical cry for a better life and bit of land to call one's own, is a swaggering and muscly slice of blues rock that, if Matti Alfonzetti was a vocal key higher, you would be forgiven for thinking was a Glenn Hughes number (there’s also similarity in the vocal phrasing here).

But it’s not all about Skintrade’s rock riffage – the title track is a strings accompanied rock ballad that lyrically tells the tale of so many bands out there who play for the love of it and for the fans that continue to come out to support those acts (the current Covid-19 curtailment of live events notwithstanding).

'Show Must Go On' also highlights, in fine style, that Skintrade are a multi-faceted outfit who have showcased all their strengths in one fell, eight song, half hour swoop.
The harder edged melodic rock of 'Falling Down' for example is the album’s rock airplay song of choice while the slower paced 'Tower' flits from quieter passages to full-blown blues rock crescendo choruses, big backing vocal cries and a great solo from guitarist Stefan Bergström.

Other Skintrade shades come in the shape of the contemporary sounding, piano-led ballad 'Other Side' and chain-gang styled, carry your sorrows on your shoulders blues number, 'Ain’t Me.'
The latter is rhythmically built on Hasse Sjölander’s drum pattern and Håkan Calmroth’s underpinning bass, enhanced by a great vocal from Matti Alfonzetti and complementary six-string remarks from Stefan Bergström.

As touched on at the top of this review, Skintrade deserve to be a bigger name on the rock circuit, but that doesn’t stop The Show Must Go On from being one of the best rock albums of 2020.