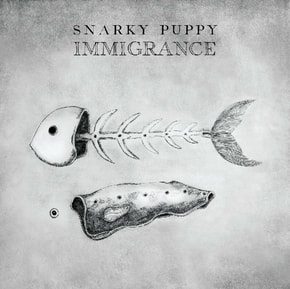 Immigrance, the thirteenth album from Brooklyn-based collective Snarky Puppy, continues and develops their tradition of producing intricate yet funky and rocky instrumental pieces within the setting of a fifteen piece band (an ensemble number that can be less or more on tours).

Bandleader and bassist Michael League (a prolific musician who even finds time for numerous side-projects) once described Snarky Puppy as "a pop band that improvises a lot, without vocals" but there’s a lot more to them than that, as regular world tours to growing audiences testify to.

And while the Michael League leading fusion ensemble was originally in the vanguard of bands following a new model in the music industry of producing and selling product outwith the usual channels, when the band won a second Grammy (the count is now three) they were signed by Universal Music Group (their own label, GroundUP, continues to go from strength to strength).

Opening number 'Chonks' makes for a very strong start; it majors on a big funk groove and features a solo by Mark Lettieri, who has the rockiest style of the featured guitarists.
​
Following track 'Bigly Strictures' is reminiscent of Sylva era Snarky (recorded with the Metropole Orchestra); it features a razor sharp horn section arrangement (of which the Brecker brothers would be proud) and ends with a killer Moog solo.

'Coven' is a slow burner with a very atmospheric (almost cinematic) opening, Middle Eastern undertones and a side order of Pat Metheny.
It's also one of the few tracks not written by Michael League; the Coven contribution comes from guitarist Chris McQueen, a welcome addition to the Snarky Puppy canon.

Another non-League written number, 'Bling Bling' (penned by saxophonist Chris Bullock) features one of the Snarky Puppy traditions, that of unusual time signatures and intricate rhythm parts (it’s a track that requires a few more listens however as it doesn’t immediately appeal in the same way as the first three numbers).

'Xavi' by contrast is an absolute winner, all nine-and-a-half-minutes of it.
The melody lines and driving rhythm are an example of Snarky Puppy at their collective best on a track that the press release described as being inspired by "Moroccan Chaabi groove" (one of the melody lines evokes a US Cop show theme more than Morocco for this listener and reviewer however).
A number destined to be in the live set for a long time, 'Xavi' also features a couple of killer solos by Zach Brock (violin) and Bobby Sparks (Moog).

By contrast 'While We’re Young' carries a stripped-back, relaxed late night jazz vibe with some interesting production ideas.
The number would probably not work in a live context but it’s an interesting inclusion and demonstrates the versatility of the band (at under three minutes it’s also probably the shortest number they have ever written).

'Bad Kids to the Back' is the stand-out track on Immigrance.
Clever ideas abound here not least of which is the swapping of melody lines and rhythm parts between the guitars and horn section whilst still holding the attention.
The whole number sits on a bed of funk with more stellar playing by all concerned; some of the three drummer percussive parts are absolutely outstanding.
Another Snarky Puppy trademark is featured on this track, where a repetitive figure is played and the drummers play around with the time signature, contributing ever more impressive fills towards the end.

Closing track 'Even Us' is a reflective piece that features a trumpet solo and manages to combine elements of Spanish and Chinese music.
It’s an unusual number to finish the album on, however, as it meanders toward the end – in summary, a track that starts promisingly but falls at the final hurdle.

Criticism of the final track aside this is another very good album from a collective that features some of the best musicians on the planet.
If you have never heard Snarky Puppy before this is as good a place as any to start – and do yourself a favour and catch them now before they start playing in enormo-dromes.

This is the new jazz, this is world music, this is funk, this is rock – this is Snarky Puppy.