One for the (ticket) money, two (bands) for the show
Stray, Del Bromham’s Blues Devils – Backstage at the Green, Kinross, 10th October 2019 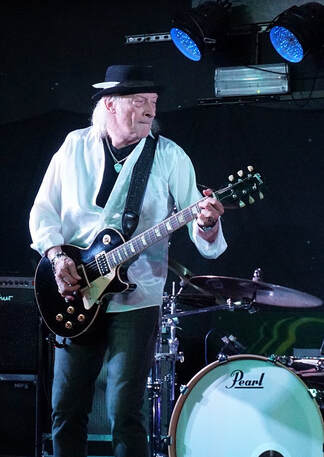 Two for the price of one – how can you refuse such a bargain, ladies and gentlemen?

Sounds the sort of thing Del boy would say, doesn’t it? That’s because he did.
No, not the three wheeled wheeler and dealer from Peckham, the rocker and roller from Acton.

Yes indeed, that one for the ticket money, two bands for the show offer came courtesy of Del Bromham of Stray (both in their should-have-made-it-big original 70s run and retooled for the 21st century guises) and his Blues Devils band who, as the name suggests, are the vehicle for Bromham’s blues orientated material (and his now three album solo catalogue).

With the Stray set more of a classic rock/ nostalgia trip (providing another chance for those in attendance including this fan, reviewer and music writer, to scratch their collective heads as to why Stray never made it to the big leagues) the Blues Devils was a celebration of current and recent Del Bromham musical events.

Opening with funky soul-rock number 'Let’s Get This Show Started' (featuring bright bursts of soulful blues guitar from Del Bromham) and the hard-pop meets Stray rock of 'Genevieve' (both from Bromham’s latest solo album, White Feather, his most personal and musically eclectic work to date) the Blues Devils presented a tight and tasty forty minutes of material that pulled out choice cuts from Bromham’s earlier solo offerings, Devil’s Highway and Nine Yards.
Highlights from those two albums included groovin’ blues brace 'House of Love' and 'Words' (Simon Rinaldo’s organ keyboard grooving with equal measure on the latter) and the southern affected, heavy-pop blues of 'The Ballad of JD.'

Stray’s heyday strengths were also their weaknesses.
The band could deliver psychedelically and progressively tinged heavyweight rock or blues rock one album only to change it up to string and horn arranged material or melodic pop-rock the next, but not being able to pigeonhole a band was an issue for many a label, management or music critic (a ridiculous, blinkered attitude that continues to this day).

More than four decades on from the band’s original split, through concert and festival performances, the occasional reunion gig and this vibrant, sonically bristling Backstage performance (which also benefited from a great sound), the 21st century Stray reminded of just what the upper echelons of rock music missed first time around.
They also proved they still have a lot to say via songs from 2010’s Valhalla; the gritty rocker 'Double Six' and the slow-build but weighty (musically and lyrically) '1600 Pennsylvania Avenue' were particularly powerful Valhalla moments.

The set opened with 'Come On Over' (from 1973’s rock, strings and horns album Mudanzas), with Pete Dyer and Colin Kempster particularly strong on the harmony vocals.
Kempster, accompanied by his four string Fender’d friend for the Blues Devils material, used a 1977 Rickenbacker for the Stray set to capture that punchy and trebly bass sound as delivered by original Stray bassist Gary Giles (nice and very much appreciated touch, Mr Kempster).

Following number 'Jericho' became a Jericho jam as the five-piece Stray got to stretch (Karl Randall’s marching beat supporting Del Bromham’s guitar licks) while the uplifting, heavyweight ballad 'I Believe It' (another Mudanzas gem) was a real highlight. 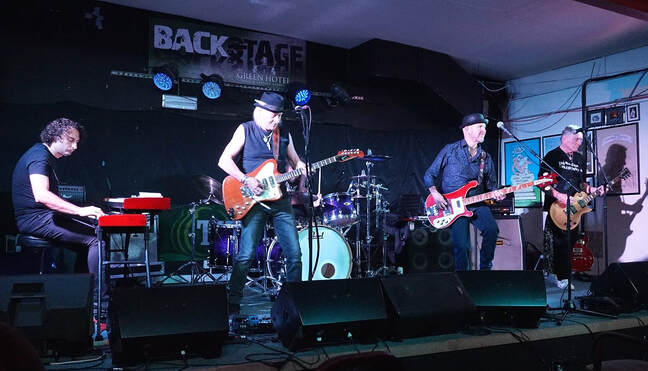 The rhythmic pulse that drove 'For The People' (that Stray were always a band of, and for, the people is evident across many of their song titles and lyrics) backed some fine twin-guitar harmonies from Del Bromham and Pete Dyer, as did One Night in Texas, which featured Dyer on lead vocals.

Pete Dyer also shared lead vocal lines with Bromham on riff-driven blues rocker 'Houdini,' from the album of the same name.
The airing of 'Houdini' immediately led to two thoughts – if the Houdini album was to appear now, every critic and his Aunty would be banging on about it as a blues rock belter; yet close your eyes during the band’s almost note for beefy note rendition and it’s 1976 again.

Stray’s set closed out on a three song salvo from the bands early 70s repertoire.

'After The Storm' rocked like the proverbial on the back of Del Bromham’s wicked riff and the rapid-fire drumming from Karl Randall (who positively monstered his kit throughout, leading to a cleanly snapped-in-two drum stick).
The rawer 'Suicide' (a very angry, and sadly still necessary, shout against racism) followed before the psychedelic rock-rollercoaster ride that is 'All in Your Mind' closed out the set.

The jaw dropping, there’s a new sound in town, nine-and-a-half minute opener from Stray’s 1970 self-titled debut album was extended further to allow Del Bromham to play around with his searing solo, at one point playing air guitar while controlling his now prone on the stage instrument via his pedal board.
Such flamboyancy aside it shouldn’t go unmentioned that Bromham is an exceptionally good lead/ rock guitar player, with a finer touch and feel than he’s probably given credit for.

The only downside to an evening full of musical upsides was a lower than expected attendance, but that simply reinforced how unpredictable club touring can be, especially school nights in the later months of the year.

Here’s to a packed house when Stray and the Blues Devil’s pass this way again in 2020.