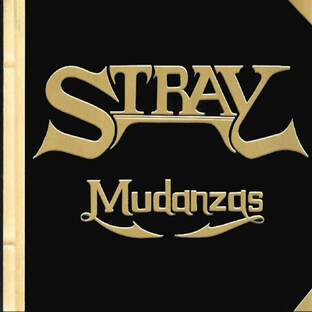 Stray, as had been said many times, have a rock and roll solid case for putting themselves forward as the best little British rock band of the 1970s never to make it big.

But that failure of major success doesn't detract from an acclaimed back catalogue, primary songwriter and lead guitarist Del Bromham’s later incarnations of the band or the sold-out reunion shows enjoyed by the original line-up of Bromham, Steve Gadd (lead vocals), Gary Giles (bass) and Richie Cole (drums).

One of the reasons for never breaking big was their strength in musical diversity (from psychedelically themed hard rock debut Stray to the blues rock of Houdini and the lighter songcraft of Stand Up and Be Counted) was also their weakness. Stray’s adventurism was ahead of its (wrong place wrong) time.

That diversification was never more apparent than on fourth album Mudanzas, originally released in 1973 and given a newly remastered re-issue via Talking Elephant Records.

Now, for the first time, how such an album came about is told by the original band via interviews conducted by Paul Newcomb, Stray’s back-in-the-day roadie and a man who is still close to the individual members.
(Paul also runs Monstrous Child, an artist management & representation, merchandising and tour booking/ promotion company that many a band or act looking for such services would do well to check out).

Del Bromham: "When we were signed up by Wilf Pine of Worldwide Artists, his decision was to take us off of the road for a while as we'd been constantly gigging for years.
He thought coming back after a period of absence with a new sound and look could be what was needed.
One criticism we'd experienced, mainly from the press at that time, was that we were too young to be musically competent, so we had to have the stage show, i.e. lights and pyrotechnics, in order to distract from the music. So now music was going to be the top priority.
I remember when Wilf heard the new material for Mudanzas he said: 'I thought I'd signed the new Black Sabbath, but I think I’ve found the Beatles instead!’"

Richie Cole: "It seemed like ages that we were off the road – it was three months or more.
We hadn’t taken a break from gigging before because we were a working band and people needed paying, even our road crew. So for us to take such a long break was both good and possibly needed at the time."

Steve Gadd: "I don’t think that we approached this album any differently from the previous ones, not consciously at least. Obviously we were a bit more experienced. We went into the studio with what we felt was the best material we had"

Bromham: "Initially we spent about a week at Escape Studios in Kent and in retrospect we got up to all sorts of nonsense, recording into the early hours of the morning.
A young Tony Taverner, who went on to work with Duran Duran, had the misfortune to be the house engineer. We would finish a session and then carry on jamming through the night on speed or LSD.
Poor Tony was slumped over the desk as we just carried on! I wish the tapes had still been rolling those nights; I remember one night in particular my tinkering away on a Hammond C3 organ.
I never knew the reason why, but we didn’t use anything we recorded in Kent, with the possible exception of the backing track for Soon As You've Grown.
It’s quite possible that Wilf effectively refused to pay the bill and we went to Olympic Studios instead."
Gary Giles: "The recording sessions for what was to become the Mudanzas album were approached with a great sense of excitement and energy. We felt that after years on the road at last we had the chance to show that Stray were not just another heavy rock band.
We had never considered ourselves as heavy rock anyway, it just seemed to be a pigeonhole that some of the music press put us into."

Cole: "We went into Escape Studios for a week and we were pretty excited and a bit nervous.
There were lots of changes going on behind the scenes and the new management was very much unlike the cozy, almost family relationship, that we had grown up with; it was Wilf Pine of Worldwide Artists.
The rehearsals went well and were very constructive. We jammed lot late into the early hours and the mood was very positive."

Gadd: "We all wanted more mainstream success and of course a hit. We thought that Wilf would be able to achieve that for us. I think we were tired from constantly gigging and needed a bit of a lift.
When I listen back to the track The Gambler, which I wrote, I can hear the negativity and remember the no win situation that I was in. Maybe that was creeping in." (Gadd would leave the band following their next album).

Bromham: "We found ourselves in Olympic Studios, Barnes, London with Alan O’Duffy as engineer and Wilf Pine as the producer and we started recording the whole album again.
However, this time Wilf wanted to make the sound bigger and more sophisticated with the use of strings and brass. Wilf suggested a new arranger on the scene at that time, Andrew Powell.
He arranged the strings etc and, also in 1973, went on to become rather famous working with Cockney Rebel and, later on, Kate Bush and David Gilmour, among others."

Giles: “This was a chance to really expand our music and show what we could do.
Mudanzas was on another level to our previous three albums and it felt like a natural progression; Mudanzas album was another part of that journey."

Cole: "During the recording we knew that this album was going to be different; we looked forward to the change and our playing was very good. We were eager to show what we could do.
I was a little skeptical I guess as to how it would be received but, as we know, it really was special and the majority of fans liked it.
It was change in style but it still worked in the live shows, which was very important to us."

Gadd: "I was keen to hear how it was coming on after we had put the basic tracks down. Wilf obviously had big ideas but I am not sure that we realised how big the difference was.
I went to mixing session one evening and surprised by how much had been added. We had no control whatsoever this process and I was a bit nervous. Wilf had not been a musician or what we thought was musically minded. We took him on because we thought he could get us places.
His taking over of the music was a bit of a shock I suppose but Wilf wasn’t the kind of manager that you sat down and talked to like that."

Cole: "After our actual recording I wandered into Olympic on a day that Andrew Powell was arranging the strings. To see a full orchestra sitting there playing along to our songs was special – for me it was like 'wow!'"

​Gadd: "Everyone said that the album was full of strings and brass, but it really wasn’t; listening to it now it is about 50/50.
I can’t say that it was my favourite Stray album; I always liked the end result of Saturday Morning Pictures."

​Bromham: "Wilf came up with the album title. Loosely translated from Spanish to English, Mudanzas means to move on, or to change. He thought that was appropriate because the feeling at the time was Stray were doing exactly that.
The album received mixed reviews from the press and the public and Stray even performed some shows with a brass section and backing vocalists, but no pyros!
Some journalists’ commented: 'Well, they’re not so good without the pyros!' You can't win 'em all, can you!"

​So, Mudanzas, a once misunderstood release that's since become an acknowledged nugget of 70s rock? Believe it.
Paul Newcomb & Ross Muir
FabricationsHQ