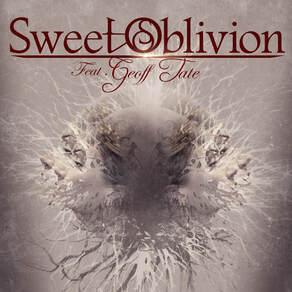 The pre-release press for Sweet Oblivion along with comment from the main protagonists – guitarist-songwriter (and bassist on the album) Simone Mularoni (of Italian prog-metal giants DGM) and renowned rock and metal vocalist Geoff Tate – made no bones about this being a collaboration formed around songs conceived, written and performed to carry that classic mid 80s to early 90s Queensrÿche vibe (albeit within a contemporary rock setting).

In short, an opportunity for Geoff Tate to return to the musical soundscapes he made famous with Queensrÿche in that celebrated era.

Further, given the content of, and finished article that is, Sweet Oblivion Feat. Geoff Tate (the line-up is completed by drummer Paolo Caridi and DGM keyboardist Emanuele Casali), Tate’s comment "I believe a lot of the fans who dig the old Queensrÿche sound will enjoy this!" is about as accurate a musical summation of this album as you will read, see or hear.

Indeed the only Queensrÿche (and wider rock-metal) fans who won’t like this are likely to be the fraternity who only ever champion the name on the tin or refuse to get behind anything that Geoff Tate has done post-split. (The not exactly amicable parting of the ways in 2012 ended up in Who Gets What Court two years later).

Which is doubly self-damning to any of that mind-set because as a set of songs Sweet Oblivion is, arguably, and with not a little musical irony, a weightier proposition than anything Queensrÿche have done post-Tate.

It might be less progressive in theme or lacking the occasional longer-form track length that was part of the classic Queensrÿche era fabric (only two songs slip past the five minute mark) but the album is no less progressive in how it delivers dynamic light and shade through its metallic sheened and melodically shod songs (and the occasional spoken word passage; a Tate trait).

The title track, where melody and metal meet in atmospheric, mid-tempo harmony, and slow-build metal ballad 'Disconnect,' are two of a handful of numbers that will have you believing the band have pulled out and dusted down older, previously unreleased Queensrÿche songs that inexplicably didn’t make it on to an album such as Empire.
Similarly, many a Queensrÿche fan will be picking out the little guitar licks or short passages that nod in past homage (to return to the title track, compare its chorus to that of 'I Don’t Believe in Love').

But Sweet Oblivion Feat. Geoff Tate is far from Queensrÿche pastiche.
The creation of darker, atmospheric passages (as used on 'My Last Story') and Simone Mularoni’s guitar stylings (melodically phrased, song serving solos with no unnecessary shredding) mean Sweet Oblivion stands strong as a contemporary offering and not just the best Queensrÿche album Geoff Tate never did.
The angular verses and melodic choruses of metal ballad 'Behind Your Eyes' and the pacey, melodic rock-metal brace of 'A Recess From My Fate' and 'The Deceiver' are contemporary-edged cases in point.

As excellent as Sweet Oblivion is however, it does lead to the following, and perhaps obvious, observation.
Geoff Tate is so revered for, and associated with, the success and sound of classic Queensrÿche that projects such as this and "classic albums performed live" (the excellent, semi-theatrical Operation : Mindcrime shows; confirmation of Empire Live in 2020) are his future, and not offerings such as the conceptual and musically adventurous trilogy of albums delivered between 2015 and 2017.
Which is a shame because The Key, the first offering of that trilogy, was an outstanding and atmospheric mix of Bowie soundscapes, darker jazz-tinted passages, rock and metal. But that's not what the fans want to hear.

Either way, Sweet Oblivion is a big, dynamic, melodic-metal shaped offering with excellent musicianship (and a huge drum sound) that showcases the Empire (re)building voice of Geoff Tate.