Back to their roots…
The Blind Lemon Gators – Tolbooth, Stirling, 20th July 2019 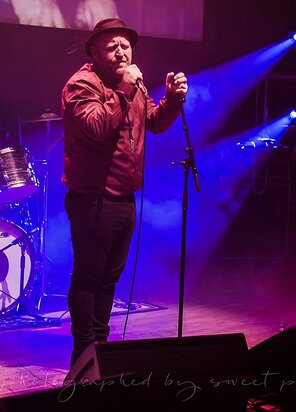 That Scottish blues styled vocalist Greig Taylor has a passion for the rootsier, soul baring side of the blues is not in doubt.
It's also the focal point of The Blind Lemon Gators, an acoustic, pre-war Delta blues influenced combo that started life as the duo of Taylor and his brother in Delta roots arms, slide guitarist Iain Donald (the pair also worked together briefly in Taylor’s first group, GT’s Boos Band).

The ‘Gators however have since grown to be a full-blown electro-acoustic unit that includes drummer Dave Cantwell;
the Taylor - Donald - Cantwell trio feature on forthcoming debut album, Gatorville, the best thing Taylor has yet done in an evolving career that includes the full electric Greig Taylor Blues Combo, solo-covers album #Songbook1 and four-piece A Cappella performances with noted American gospel and blues singer Earl Thomas.

Gatorville was also the reason for the sold-out show at the Tolbooth Theatre where the Stirling based band (a quartet on the night with the addition of Redfish bassist Rod Mackay) previewed the album by way of a pre-launch show.
​
​Rod Mackay’s fat, low-end notes, in tandem with Dave Cantwell’s train track rhythms and snare-sharp, military precision beats, were the perfect canvas for Greig Taylor and Iain Donald to vocally and notationally paint over – many of Taylor’s lyrics on Gatorville are deeply personal, forthright or soul-baring while Donald’s slide work is, frankly, some of the most emotive and expressive you will hear this side of the deep, bluesy Atlantic pond.

​Opener 'Blues Man’s Shoes' (which followed immediately after a seven-minute introductory film tracing not so much the social backgrounds as the social bluesgrounds of Greig Taylor and Iain Donald) encapsulated in four minutes what these rootsy, country-blues ‘Gators are all about.

Iain Donald’s introductory blues notes, followed by the down the bumpy railroad tracks rhythm from Dave Cantwell (and a pumping, complimentary bass line from Rod Mackay) captured the musical essence of the Blind Lemon Gators while Greig Taylors’ forthright declaration of "how can you even sing the blues if you’ve never even walked in a blue man’s shoes!" was a lyrical rebuttal to those who think they just need to sing about a boy child’s comin’ or play a B.B. King tune on a vintage Gibson to call themselves blues players. 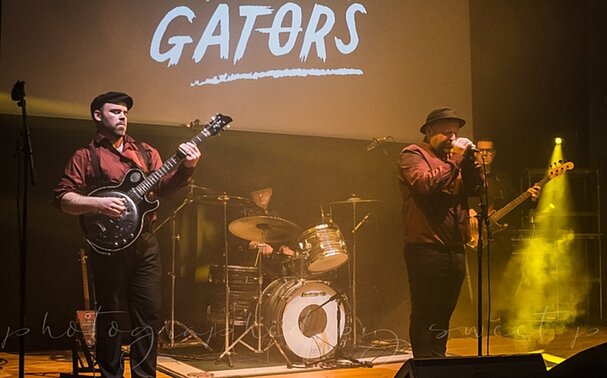 As has always been the case with Greig Taylor, in any band or solo incarnation, a number of choice covers featured to add some blues based familiarity (there's also the fact he just loves to sing them; and it shows).
Here the covers included a blues to the core take of Muddy Waters’ 'Champagne and Reefer' (if ever a song was made for Greig Taylor to sing...), a delightfully Delta arranged take of Black Crowes number 'She Talks to Angels,' ‘Gator biting renditions of 'Death Letter' and 'Rollin’ and Tumblin’' and the one non-original recorded for Gatorville, 'Goodnight Irene.'

The famous and oft-covered Lead Belly number was recorded for Gatorville in dedication to Iain Donald’s mother, Karen Ann Donald, who sadly passed in 2018.
That each performance of the song is also played in her memory is musically and visually evident – Iain Donald can’t get through either of his two beautifully phrased and emotionally charged solos without having to take a quick, wipe-the-tears pause (something I doubt will ever change).
The spacious vocal-and-slide interpretation of the folk-blues classic was a particularly poignant highlight of the set. 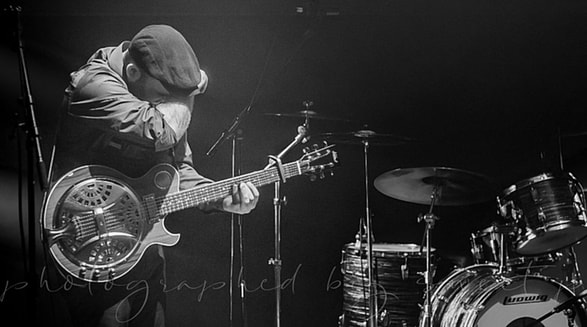 'Gators don't shed crocodile tears; what you see is what you get; genuine, expressive emotion

There was also some well-crafted rockin’ blues and gospel influences on display via, respectively, the swingin’ and rhythm-driven version of the GT’s Boos Band’s 'Seven Questions' (Greig Taylor effectively covering himself, ‘Gators style) and the slave-chain, slow march rhythm of 'Better Land' (a song Taylor considered writing for Earl Thomas but wisely kept for the Blind Lemon Gators and Gatorville).
​
Other Gatorville highlights included the Cajun tinted 'A Little Death' (Greig Taylor’s most lyrically personal moment, preceded by an introductory story about being a single parent to two daughters), the simply arranged but highly effective Sam Cooke homage 'All I Ever Wanted,' the short and sharp 'Wicked Charm,' throwback blues number 'I Ain’t Got You' (a song straight out of the Chess Records/ 50s blues canon) and 'Gravy Train,' which rattled down the blues tracks at a fair old pace.

The latter brace were two of a handful of numbers to feature guest harmonica player, Dave Ivens, who also features on Gatorville.
Ivens intuitive call-and-answer interplay with Iain Donald (each giving the other space to roam on their respective instruments) was another expressive blues highlight of the show.

An encore of Chris Stapleton’s 'Tennessee Whiskey' (another great 'Gators fit) brought the impressive and not a little emotional ninety minute set to a close and the unarguable conclusion that The Blind Lemon Gators are one seriously snappy band.


Click here for FabricationsHQ's Q&A Interview with Greig Taylor and here for the Feature Review of Gatorville.