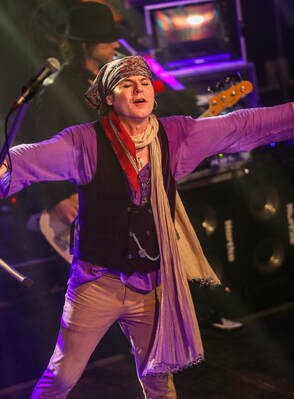 Spike lead the Quireboys and girls on another chorus
Four band bills including a double headliner showcase sounds like a pretty good bang for your buck (or ever diminishing value of your pound).

But when you are heading for a Monday night gig at a venue that usually has a curfew that means a start so early there’s every chance the first band (and possibly even the second) are playing to only their crews and the bar staff.

There’s also the worry, as previous reviewing experience can testify to – that quantity does not necessarily mean quality.

Fortunately the reputation and decades of musical pedigree carried by raucous rollers The Quireboys and melodic AOR exponents FM, plus the live credentials (and noteworthy studio output) of southern tinged blues rockers Bad Touch and the hard-edged melodic rock of VEGA alleviated any concerns as regards quality.

The early start, however, did VEGA no favours (an issue that could have been avoided, as touched on later).
​Hitting the stage a full 15 minutes before the confirmed band-on times (your reviewers therefore missing the first two songs, the rockin’ positivity of 'Let’s Have Fun Tonight' and the fast paced Euro-rock styled 'Explode') VEGA delivered a quick-fire half hour set to a still filling venue, but one that was enthusiastically received by VEGA fans and newbies alike.

VEGA are from the Def Leppard / Bon Jovi School of Rock (with more than a hint of the still criminally under-rated Dan Reed Network, sans the funk) – to wit, big sing-a-long choruses, air punching anthems and strategically placed "woah-ohs" that encourage audience participation.

Which is all melodically fine and rockingly dandy because VEGA are very good at ploughing that particular furrow – guitarists Marcus Thurston and Mikey Kew are very adept six-stringers (a prerequisite for the melodically expressive genre) while singer-front man Nick Workman deserves special mention for his high-energy stage presence and a great vocal performance.

'Let’s Have Fun Tonight' and set closers 'White Flag' and 'Saving Grace' also underlined and reinforced this is a band whose more recent material outshines what has come before – VEGA are on an upward trajectory and with more consistent (and less Jovi-esque) song writing they could easily reach the heights FM have worked so hard to achieve and retain.

It’s also worth mentioning that while VEGA were benefactors of a reasonable light show, the sound detracted from their performance (through no fault of the band); this is guitar-rock so why were those particular instruments so low in the mix? 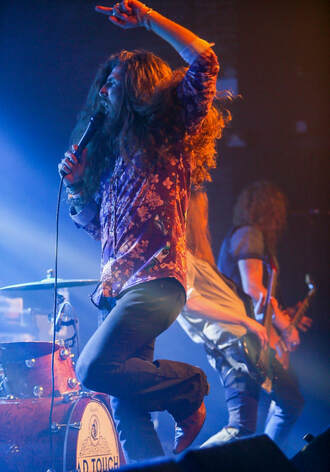 Bad Touch's Stevie Westwood, dressed to flowery shirted kill
The self-same sound issues afflicted Bad Touch but mysteriously, or unsurprisingly (depending on how cynical your are about the pecking-order art of full sound checking and quick line checking) the sound balance and mix improved the further up the bill we went – having a mixing hierarchy on multi-band bills cheats the paying public.

Bad Touch don’t look like they come from Norfolk; this quintet of guys look and sound like a southern rock band from the 70s rock (with big riffs and choruses that invoke the spirit of Zeppelin via Lynyrd Skynyrd) and a side of contemporary blues. All of which is no bad thing.

Front man Stevie Westwood made an impression from the outset and not just because of his colourful shirt of choice for the evening (mandatory stage attire for the singer); he worked the crowd so well that by set’s end half an hour later the Weegie roar of approval came from the entire audience and not just the Bad Touch fan brigade (roars of job done approval were then reciprocated by the flowery shirted Mr Westwood as he and his band mates left the stage).

Bad Touch are currently touring in support of newest album Shake a Leg.
It was therefore a smart move and not unsurprising that the first six numbers of their seven song set came from that album with party styled opener 'Lift Your Head Up' (a tribute and nod to the gig-going fans), the big blues rock beat of 'Too Many Times' and the damn near danceable 'Dressed to Kill' creating particularly good impressions.
Ending with the infectious Planet Rock airplay hit '99%' left the crowd wanting more – always a good sign.

Bad Touch are not going to change the world but three albums down there’s no question they should already be bigger; if you like southern-tinged, good-time, down ‘n’ dirty blues rock then these guys are well worth a listen and deserving of your support. 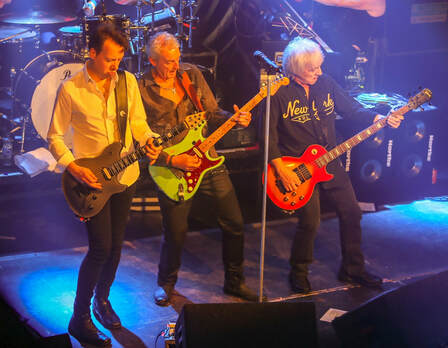 FM's Jim Kilpatrick, Steve Overland and Merv Goldsworthy melodically rock the joint
​On the face of it The Quireboys and FM would seem disparate gig-fellows.
The Quireboys, led by the glass and sand vocal rasp of the ever enigmatic and ever smiling Jonathan "Spike" Gray are, even thirty years on from highly impacting debut album A Little Bit of What You Fancy, swaggering Faces meets the Stones raucous roll personified; FM are Melodic rock with a capital M as opposed to melodic Rock with a capital R and as such are not ashamed, nor adverse, to schmaltzing it up.

There are also similarities however.
Each band has a front man of note (melodically soulful FM singer Steve Overland is singing as well as he ever did) and their decades of longevity has made both bands respected members of British rock and stalwarts of their respective genres.
The vast majority of the crowd therefore applauded, championed and sung-a-long to both bands "best of" styled sets equally (although the decibel level rose noticeably for The Quireboys).

How each band went about their stage business did however show those aforementioned differences.

FM brought the whole light show and shebang to their hour long set, including more multi-pot pink-lit smoke explosions than you could count and a lights down, darkened stage, 'Breath Fire' PA intro to create an atmosphere (headlining the Wembley Arena you could see the heighten the anticipation point; penultimate band at the Glasgow Garage in front of a now packed and impatient Weegie crowd (including a 30 minutes wait between Bad Touch and FM, making the early starts for the supports all the more of a nonsense)?
​Not so much.

But once the muscly 'Breath Fire' kicked in proper and the FM hits started rolling (obligatory outings and sing-a-longs for 80s successes 'That Girl' and 'I Belong to The Night,' that FM schmaltz in the shape of 'The Dream That Died'), FM did what FM do so very, very well.
Which is to melodically rock the joint with songs such as the heavy AOR of 'Life is a Highway' and the Foreigner-esque 'Over You,' which  was preceded by the instrumental 'Metropolis' from guitarist of the night, Jim Kilpatrick (you don’t work with the likes of Bernie Marsden unless you know what you’re doing on a six-string).

Closing with euro-rock styled 'Tough it Out' and big chorused rocker 'Killed by Love' (the latter from latest studio album Atomic Generation), FM delivered the melodic rock appetiser before the main rock and roll course appeared.

The Quireboys are embraced by rock and roll fans the country over but there is no question Glasgow loves the band and The Quireboys love Glasgow.

Walking on, plugging in and cranking up to a deafening roar and the now expected and shouted along to "for one night only... ladies and gentlemen… The Quireboys!" the band, over the next hour and encore, proceeded to prove why they are the greatest British rock and roll band not called the Rolling Stones.

Following honky tonk blues opener 'I Love This Dirty Town' Spike led the Weegie congregation through a little bit of what they fancied from the acclaimed debut (seven songs in all; the band’s first offering remains The Quireboys album all others aspire to).
Little Bit... highlights included the slow slide 'n' swagger of 'There She Goes Again,' 'I Don’t Love You Anymore' (the best ballad Rod & The Faces never did) and the Weegie chorus in full vocal cry for 'Hey You' and '7 O'Clock' (the best rock 'n' roll number Rod & The Faces never did).

​​Not that it was all about the oldies but goldies; new album Amazing Disgrace provided two choice cuts in the shape of the funkily riffed rock-blues 'Seven Deadly Sins' and the rock 'n' swing of 'The Original Black Eyed Son,' helping to prove these Quireboys can still rock their roll on album.

But it wouldn’t a Quireboys gig without some later era, softer touch classics – 'Mona Lisa Smiled' and 'Hello' are, simply, two of the best songs they have ever written (and songs Rod Stewart and Frankie Miller would have souled their vocal souls to own thirty years earlier). 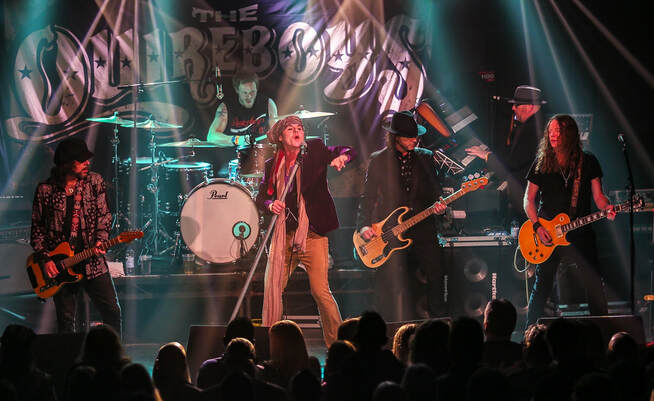 The Quireboys, the greatest British rock and roll band not called the Rolling Stones
The raucous side of The Quireboys is never far away however and 'This Is Rock 'N' Roll' (dedicated each night to the recent and sad passing of Bernie Tormé) proved exactly that, bolstered by some tasty blues slide and feisty solo work from Guy Griffin who, like Spike, goes back to the Quireboys original but short-lived 90s era.
(There’s a healthy argument to be made that along with keyboardist and pianist Keith Weir, guitarist Paul Guerin, drummer Dave McCluskey and the quietest man in the band, bassist Nick Mailing (put a microphone near him and he’s likely to break in to a rash) you have the best Quireboys line-up since those 90s days).

Equally raucous was encore number 'Sex Party,' proving categorically this was The Quireboys and not FM closing the show.
The irony of such a song / title however was that with the crowd being "of an age" most of the audience would be having a unwind drink or post-gig night-cap before heading home, relatively early (bloody curfews) to their own beds.

Yep, for those of us where a late night gig is not getting home until after 11pm Rock and Roll is certainly not what it used to be, but Rock and Roll is The Quireboys, still amazingly disgraceful after all these years.