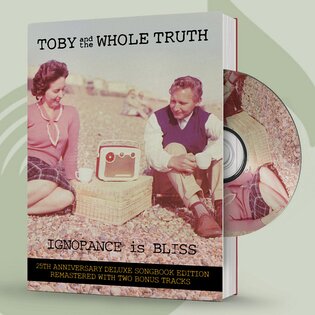 Toby Jepson’s extensive CV as a singer/ songwriter/ producer/ engineer includes time fronting Fastway and Gun, performing with Dio’s Disciples, producing The Virginmarys and the reformed Chrome Molly, and co-producing for Saxon on their back-to-their-roots album Call to Arms.

But we’re 25 years ahead of ourselves…

In 1995 Toby Jepson released his first solo album Ignorance is Bliss, under the name Toby and the Whole Truth.
It came a year after one of the most successful rock bands of their time, the Jepson fronted Little Angels, bowed out after a seven year run with a show at the Royal Albert Hall (a prestigious gig end to a group that were now fracturing amidst lack of label support and changing musical times).

The self-engineered Ignorance is Bliss was the reflective result of where Toby Jepson was at the time; an eleven-song collection of multi-styled, almost alt-rock and roll, but with elements of anger and pathos.

Opener 'Some People Are More Equal Than Others' is a slow-paced rocker with an anthemic chorus; that the lyrics are delivered through a purposeful vocal (with an almost venomous slant) clearly indicates young Mr Jepson had some issues to get off his chest.

Following number 'Better Off Without Me,' which is slightly reminiscent of the Faces, features another great vocal performance of lyrical conviction.

'Slipping Through Your Fingers' is a slow burner that builds to a memorable chorus while 'Haven’t Got Your Strength' demonstrates both Toby Jepson’s strong songwriting abilities and mastery of dynamics (a finely crafted song with light, shade and a memorable chorus).

The contrasting, almost bluesy swagger of 'The Wind Blows Hard' is redolent of later era Lynyrd Skynyrd (without the extended guitar solos); as such it comes across as a weightier proposition than the following acoustic led number 'All Heal in Time,' which acts more as a reflective interlude piece.

'I Won’t Be With You' is one of many highlights on Ignorance is Bliss.
Another number delivered with musical and vocal conviction, the lyrics of betrayal demonstrate the songwriter certainly bore some grudges back then (it also has great performances all round – supporting Toby Jepson on the album were drummer Pete Thomas, guitarist Russ Godwin and bassist Roger Davis).
​​'Save Me From Myself,' featuring one of Toby Jepson’s now trademark big choruses, develops into a more hopeful song of redemption; foot tapping, finger picking contrast is then provided by low-key acoustic number 'Out of Sight, Out of Mind,' which follows.

The closing brace of songs up the rockin' ante.
'Harder All the Time' has an almost funky driven intro that develops into quite the feisty rocker (sporting more than a nod toward the Red Hot Chilli Peppers); the heavy psychedelia of 'Open Your Mind,' which merges a strong riff with a walking bass line and overlaid vocal melodies, is yet another album highlight.

But 'Open Your Mind' isn’t quite the end for Ignorance is Bliss 25 years on – the fully remastered re-release includes two previously unreleased songs, the funky and choppy 'Get Your Feet On the Ground' and the electro-acoustic 'Spiritually Bankrupt.'
The Deluxe Songbook Edition of the album also comes complete with a 36 page booklet featuring production notes, illustrations (by Toby Jepson’s youngest daughter Evelyn), lyrics, song explanations and a foreword by David Gailbraith (Kerrang! magazine).

Since announcing the 25th Anniversary re-release of Ignorance Is Bliss, Toby Jepson, who is also a Planet Rock presenter, has launched a Patreon membership site and a podcast series.
The Toby and The Whole Truth podcasts, which have featured such artists as Ricky Warwick and Biff Byford, seek "to uncover the reality of what it means to live and work as a successful person in the real entertainment business."

Nor is the shift in mood of experiences from 25 years ago to now lost on Toby Jepson:
"If the lockdown has proved one thing to me - with regard to how to move forward in what is now an unknown, unprecedented situation in the music business - it’s about engaging directly with those that really care… For so long far too much time has been spent ‘selling’ and not enough ‘giving back’ so that’s where my focus is: throw my creative arms around my friends and audience and give them something of real value."

And that’s just what Toby Jepson is doing – not just through current activities but this fully remastered, 25th Anniversary Songbook Edition of Ignorance is Bliss.
Because a quarter of a century removed from the situation and circumstances that created the rawest and most lyrically honest album of Toby Jepson’s career, the songs within still have "real value," delivered by a consummate singer-songwriter who should be a far bigger name than he already is.

And that’s the Whole Truth of the matter.