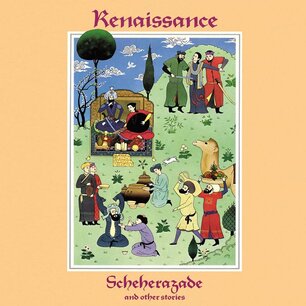 The main reason for such an accolade is the twenty-five minute orchestrated opus 'Song of Scheherazade,' which spanned all of Side Two on the original record.
A nine-part storytelling suite based on One Thousand and One (Arabian) Nights, 'Song of Scheherazade' is one of the finest (if not the finest) and earliest examples of classical and rock producing a masterwork that fuses both genres (interestingly, as documented in the accompanying 20 page booklet, the band believe it could have been even better than it was).

Not that the three song Side One was along just for the 33rpm ride.
Near eleven-minute opener 'Trip to the Fair,' a song that blended classical (through John Tout’s piano led introduction), carnival-styled music and jazzier folk-rock, is a whimsically arranged highlight.
Destined to become a Renaissance classic and live staple is Side One closer 'Ocean Gypsy,' a beautiful seven-minute, classically set ballad with equally beautiful, high-floating vocal from Annie Haslam.
Sitting between the two is 'The Vultures Fly High,' a short, pacey piece of pop-rock that takes aim at the critics who, for reasons best known to themselves, continued to belittle the band and their music.

The concept behind 'Song of Scheherazade' came from an idea Michael Dunford had a few years earlier, including a possible musical (which never came to fruition); by 1975 however the time was clearly right to bring Dunford’s Arabian Nights idea to musical fruition (influenced by, but not related to, 'Scheherazade/ Op. 35' by Nikolai Rimsky-Korsakov).
Nor did it hurt that the classically trained John Tout was clearly in his element, Jon Camp was able to make many of his bass parts sound almost cello like and the band’s primary lyricist, Betty Thatcher, captured the story/ narrative perfectly.

The trumpets of 'Fanfare' and galloping pace of the piano and orchestrated 'The Betrayal' set up the Song of Scheherazade, which makes its thematic entrance with 'The Sultan,' which features a Jon Camp lead vocal, high-harmony backing from Annie Haslam and the "She sings, Scheherazade…" motif that would make such an impact at song’s end.

'Love Theme,' written by Jon Camp and played beautifully on piano by John Tout, builds with orchestration to 'The Young Prince and Princess as told by Scheherazade;' the latter is delicately conveyed by Annie Haslam in her storytelling Scheherazade guise.
'Festival Preparations' provides vibrant, up-tempo musical contrast before John Tout’s 'Fugue For the Sultan' herald’s his excellency’s entrance. 'The Festival' then repeats the 'Preparations' motif before opening into a celebratory, jaunty acoustic & lyrics section.
'Finale' brings the whole piece to an emotive & joyous conclusion with, first, a reprise of Jon Camp & Annie Haslam’s "She sings…" duet before Miss Haslam soars solo to hit that "Schehera-zade!" note.
Spine duly tingled.

Re-released as a 24-bit digital re-master from the original master tapes by Ben Wiseman with bonus track (single version of 'Ocean Gypsy') and second disc featuring Renaissance Live at Nottingham University in 1976 (including 'Song Of Scheherazade' in full,) Scheherazade and Other Stories are tales worth re-telling.

The remastered & expanded edition of Scheherazade and Other Stories will be released on Cherry Red Records/ Esoteric Recordings on January 14th.
Pre-order: ​https://www.cherryred.co.uk/product/renaissance-scheherazade-other-stories-remastered-expanded-3cd-box-set/