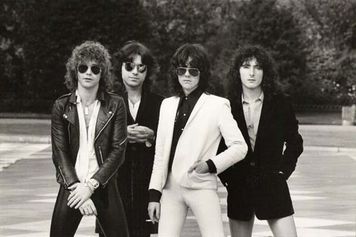 All three will be mentioned again and two of them had a direct part to play in the formation of Wild Horses, a band that were, unfortunately, never destined to make any sort of major impact or have any longevity.

In many ways Wild Horses were the early 80s equivalent of the short-lived mid-70s band Mott.
There are certainly some interesting similarities: both groups featured band members who had achieved success with noted acts (Mott the Hoople in the case of Mott); both had solid line-ups as regards musical strength and song-writing ability; both produced two albums that contained some excellent material.
​
The biggest similarity is, sadly, neither band gained the success they deserved; their albums became not rock classics but cult classics.

Wild Horses were formed around the Scottish duo of Jimmy Bain (bass, vocals) and Brian Robertson (guitars, vocals); such a pairing gave the new group an identity – and a reputation – before they had even recorded so much as a song together.
Brian Roberston would later recall Thin Lizzy co-manager Chris O'Donnell (who also become Wild Horses manager) named them after the famous Rolling Stones number. It was certainly fitting – "the tartan terrors" as Bain and Robertson were occasionally labelled, were seen as two of the bad boys of rock; they liked a drink or six, sniffed more than the occasional garden flower and loved to party.

The history of Wild Horses goes back to 1978 when Jimmy Bain and Brian Robertson got together after they had been fired from Ritchie Blackmore's Rainbow and Thin Lizzy, respectively.

Brian Robertson was a pivotal piece of the classic Lizzy line-up of the mid to late 70s; along with guitarist Scott Gorham he was part of the band's trademark twin-harmony-guitar sound.
His final studio album with Thin Lizzy was, rather fittingly, 1977's Bad Reputation. Robertson only played on three songs however, having injured his hand in an incident at London's famous Speakeasy Club.

Jimmy Bain had featured on the Rainbow and bona fide rock classic album Rising in 1976; he was also part of the band for their subsequent world tour.
However after being dropped by Ritchie Blackmore in 1977 he found himself out of a job.
By the next summer he was putting Wild Horses together with Robertson.

Early incarnations of Wild Horses featured ex-Wings guitarist Jimmy McCulloch (another Scot) and ex-Small Faces sticksman Kenney Jones.
McCulloch was soon replaced by guitarist and keyboard player Neil Carter while Jones would soon depart for The Who, replacing the late great Keith Moon.
​
Dixie Lee then sat in the saddle at the Wild Horses kit but his stay was also short-lived; he was replaced by Clive Edwards.
Edwards, ex of The Pat Travers Band, had worked with Uli Jon Roth's Electric Sun prior to joining Wild Horses; he was a good fit and became an integral piece of the short-lived Horses history.

The band toured in 1978 and played the Reading Festival in 1979; EMI signed the band shortly thereafter.
With EMI backing, Trevor Rabin's polished production and Jimmy Bain and Brian Robertson's musical pedigree, the first Wild Horses album was eagerly anticipated by the critics.

The self-titled debut was released in April 1980 and while it met with favourable reviews it didn't make the impact it deserved or perhaps even expected – Wild Horses peaked at #38 on the UK Albums Chart and all three singles lifted from the album failed to make any impact.

Criminal Tendancies - from Wild Horses (1980)
Wild Horses was an excellent melodic hard rock release but it's relative failure may be down to the age-old problem of "name."

Brian Robertson and Jimmy Bain's previous bands, Thin Lizzy and Rainbow, continued into the 1980s with further personnel changes but nary a waver – Lizzy were still a huge live draw and came close to equalling the musical heights of their classic 1970s output; Rainbow actually bettered theirs, at least in commercial terms.

But the Thin Lizzy and Rainbow names were firmly established, almost guaranteeing continued success.
Some of the names within Wild Horses were certainly known, but it's the name on the tin that sells or makes the difference – even when the contents may be no better or worse than the competitors on the shelves.
A fact of musical life that continues to this day.

Wild Horses. Thoroughbreds or also-rans? The former in critical review, the latter in lack of success.

Wild Horses were perhaps destined to be short-lived (a drifting apart divorce fuelled by drink, drugs and disagreements would lead to the Brian Roberston - Jimmy Bain split) but Bain and Robertson certainly had a musical chemistry, especially evident in their song writing.
The pair were responsible for nearly all the songs written for both albums – although there was another notable name that co-wrote one song and clearly influenced a number of others...

Phil Lynott, Brian Robertson's old sparring partner in Thin Lizzy, contributed to the Wild Horses catalogue.
Lynott was also a friend of Jimmy Bain's and Bain would repay the co-writing compliments by writing some material with Lynott for the charismatic front man's solo albums recorded around the same time.
​
There was also, undeniably, a "Lizzy sound" or arrangement on a few of the Wild Horses numbers but that had as much to do with Brian Robertson as it did any input Phil Lynott may have had (Robertson co-wrote many Lizzy classics and had a guitar-hand in many of the arrangements).

When it came to lead vocals most of the material was sung by Jiimy Bain, with Brian Robertson contributing a couple of leads on each album; neither were ever the greatest singers in the world but they could both hold a tune and were singing songs they created, giving them an immediate identity.
(Interesting vocal curio: Roberston swears that around the time the band was being put together both Steve Perry (who would be on the cusp of being hired by Journey) and Charlie Huhn (who would join Ted Nugent's band) made it known they were interested in being part of the Wild Horses herd; both were passed over).

One of Brian Robertson's infrequent vocal outings featured on 'Flyaway,' the lightest song Wild Horses ever recorded (written by Jimmy Bain and Phil Lynott) yet a track that would become one of their most memorable.

Flyaway - from Wild Horses (1980)
The band's second album, Stand Your Ground, followed in 1981 and was a rockier and riffier release with keyboards posted Missing In Action.

The edgier sound was clearly a conscious decision but it was also dictated by a change of personnel.
Guitarist John Lockton joined in the Autumn of 1980, replacing Neil Carter, who had departed to join UFO (Carter's departure also meant the cancellation of a tour; Jimmy Bain's thoughts on the matter would materialise in the lyrical bitterness of the Stand Your Ground number 'The Axe').

Stand Your Ground opener 'I'll Give You Love' is a perfect example of the band's edgier direction – Jimmy Bain's vocal is almost spat out as he drives the song with his galloping bass runs.
It was a style of bass playing that notables such as Steve Harris would make famous, featuring on many Iron Maiden classics of the same era and later years.

Stand Your Ground wasn't all edginess or melodic intensity however – the band loosened up on a couple of numbers including Chuck Berry's 'Back in the U.S.A' and the fun rock and roll of 'New York City.'
Wild Horses could also loosen up on stage – their version of the soul-pop classic 'Everlasting Love' was performed on occasion and was always more fun than finesse.
It was rumoured 'Everlasting Love' was to be recorded for single release and produced by Phil Lynott, but sadly that never materialised.

By the summer of 1981, with only limited success forthcoming, Wild Horses were effectively over when Brian Robertson and Clive Edwards left shortly after a London show in May (recorded and later broadcast by BBC Radio).

Jimmy Bain retained the name and continued with John Lockton, bringing in stepfather and son musicians Reuben and Laurence Archer (vocals and guitars respectively) and Frank Noon on drums.
However the Archers and Noon left only months later (forming their own band, Stampede) and Wild Horses were put out to pasture.​

The real twist to this Horses tale is that a number of the band's pivotal members are remembered more for the groups they worked with prior to Wild Horses, or shortly after.

Brian Robertson will always be associated with Thin Lizzy and after Wild Horses joined, somewhat surprisingly, Motorhead, where he remained for two years.

Jimmy Bain reunited with his Rainbow colleague Ronnie James Dio in 1983 when he became part of the singer's own band, Dio. He was an integral part of Dio for most of the decade.

Neil Carter was a significant component in UFO's early 80s line-up before working with Gary Moore for a number of years.

There is another UFO and Wild Horses connection – Clive Edwards (who worked with a number of bands after Wild Horses including Bernie Marsden's S.O.S.) and Laurence Archer were part of the early 90s UFO line-up.

In an era where classic rock band reunions are commonplace, and with renewed interest in groups such as Wild Horses, it may have seemed like a missed opportunity for Jimmy Bain and Brian Robertson not to have considered such a reformation.

But while Bain had stated in recent years he would be interested in just such a get-together Robertson was more of a mind that, having been there and done that, he had no intention of buying another Wild Horses tour T-shirt.

Thirty-five years after the Bain-Roberston separation any talks of a reunion became a moot point when Jimmy Bain sadly passed away in January 2016; he had been performing with Dio band alumni Last in Line featuring singer Andrew Freeman.

When the Wild Horses albums first saw the light of day there wasn't exactly a rush to the record shops by the rock buying masses, but there was a Japanese CD release for the albums via EMI-Toshiba in 1993 (the band had a solid following in Japan).
There was a European CD + bonus tracks issue in 1999 by Zoom Club and ten years later Krescendo Records followed up with a re-issue of their own, which included additional bonus tracks (Krescendo were also responsible for the 2014 bootleg quality release Live In Japan, recorded in Tokyo in October of 1980).

The definitive CD reissues came in 2013 from Rock Candy Records, including B-sides, live tracks and a number of previously unreleased demos.
All of which gave the "tartan terrors" and the rest of Wild Horses the chance for one more, deserved, canter around the ring.

Audio tracks presented to accompany the above article and to promote the work of the artist/s.
No infringement of copyright is intended.