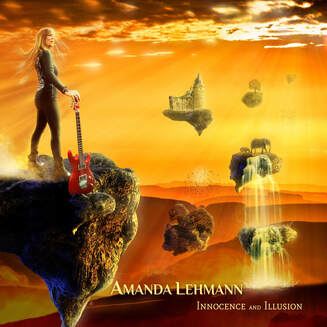 It’s remarkable to think that after a musical career spanning over three decades Innocence and Illusion is singer-guitarist-songwriter Amanda Lehmann’s debut solo album (prior, the only other studio offering from Lehmann as a solo artist was her ear-catching 4-track EP Shadow back in 2010).

But as many a progressive music fan will know, Amanda Lehmann has been busy these last dozen years working, touring and/ or collaborating with Steve Hackett, whose prolific recording and touring schedule (the latter only scuppered by a global pandemic) keeps not just Mr Hackett busy but his ensemble cast of top-notch musicians.

However the good news is it’s been well worth the eleven year wait between EP and debut album.

Opening with a semi-ethereal, synth-scaped vocal intro, 'Who Are the Heroes' unfolds itself to become an emotive and well-crafted seven minute slice of atmos-prog that recalls mid-70s Genesis and classic era Renaissance (sans heavy symphonic dressing).

Renaissance related, it’s worth noting Amanda Lehmann, certainly in terms of her beautifully clear annunciation and emotively phrased vocality, has a touch of Annie Haslam about her (and a soupçon of a lower register Kate Bush for good measure) while still being very much her own singer with her own 'voice.' It's also a voice that brings true character (in both senses) to the songs, and the lyrics.

'Who Are the Heroes' also features some delightful and complementary Amada Lehmann guitar lines that are, perhaps unsurprisingly, quite Hackett-esque in melodic phrasing.
But then Amada Lehmann is not just a lovely singer, she’s a mighty fine (self-taught) guitar player; her six-string prowess graces all tracks bar one, with the aforementioned Mr Hackett guesting on two.

Amanda Lehmann also contributes keyboards & piano to Innocence and Illusion alongside Nick Magnus (on five tracks) and Roger King, who adds keys to two others.
Additionally, Magnus and King’s respective engineering and mixing skills (and Magnus’s mastering) have delivered an album that sounds as good sonically as it does musically & vocally.

A change of pace and style then comes by way of the shorter and snappy 'Only Happy When it Rains' (a jolly jazz-blues number featuring clever Amanda Lehmann harmonies, Steve Hackett on blues harmonica and Rob Townsend on suitably jazzy sax), before the third and final long-form number takes centre stage.

The seven and a half minute 'The Watcher' is a part bluesy, part darker rock-prog piece that just oozes atmosphere and foreboding; Amada Lehmann’s guitar skills are very much to the fore here, underlining that she can hammer-on, note bend and fire off melodically focussed licks with the best of ‘em.

As if to prove that very point, Amanda Lehmann and Steve Hackett get their (melodic) rock on later for
the twin guitar stylings of 'Forever Days,' which features some wicked Hackett licks on the darker, faster paced instrumental section.

Each song, lyrically, is a delightful dreamscape or real life journey but there is no question the most emotive song is 'Memory Lane,' a touching ballad (with string arrangement by Roger King and sax solo from Rob Townsend) inspired by Amanda Lehmann’s mother’s own journey with, and through, dementia.

The song also doubles as a cathartic comfort blanket for those affected by the horrible, memory stealing disease ("echoes in an empty dance hall, the garden where you used to play...")
Equally emotive is the more simply structured piano and harmony guitar led 'We Are One,' while the soft brush styled snare strokes and piano refrain of the jazzier 'Childhood Delusions' is a plaintive look back to such times, accompanied by "the man in the moon" who "still follows me home."
(The "over the rainbow" and "wish on a star" lines are also nice touches; clever nods to both the years past and the song’s classic Songbook era arrangement).

The album closes on the nylon string guitar and vocal delicacy of the Lehmann & Hackett penned vignette piece 'Where the Small Things Go,' which is as much an album ending lullaby as it is a lovely lament.

With Innocence and Illusion Amada Lehmann has stepped out of her own 2010 Shadow (and to a lesser degree Steve Hackett’s) to deliver the most gorgeous of full-length debuts.

​
Innocence and Illusion will be released on Friday 20th October on CD (digifile with booklet) and Digital.
Pre-order: https://officialmerchandise.store/collections/amanda-lehmann/products/innocence-and-illusion-alh